Home News INSIGHT: Can US, global economies avoid recession amid a whirlwind of headwinds?

INSIGHT: Can US, global economies avoid recession amid a whirlwind of headwinds?

NEW YORK (ICIS)–Can the US and major economies around the world avoid a recession in the face of what can only be called a whirlwind of headwinds?

In the US, the Federal Reserve is moving to tame the inflation beast and engineer a soft landing for the economy. Fed chair Jerome Powell opened the FOMC (Federal Open Market Committee) press conference on 4 May by addressing the American people directly.

“Inflation is much too high, and we understand the hardship it is causing, and we’re moving expeditiously to bring it back down. We have both the tools we need and the resolve it will take to restore price stability on behalf of American families and businesses,” said Powell.

The Fed has made it crystal clear that inflation is Enemy No 1. The tools to be deployed are aggressive interest rate hikes and the shrinking of its balance sheet (known as quantitative tightening or QT). 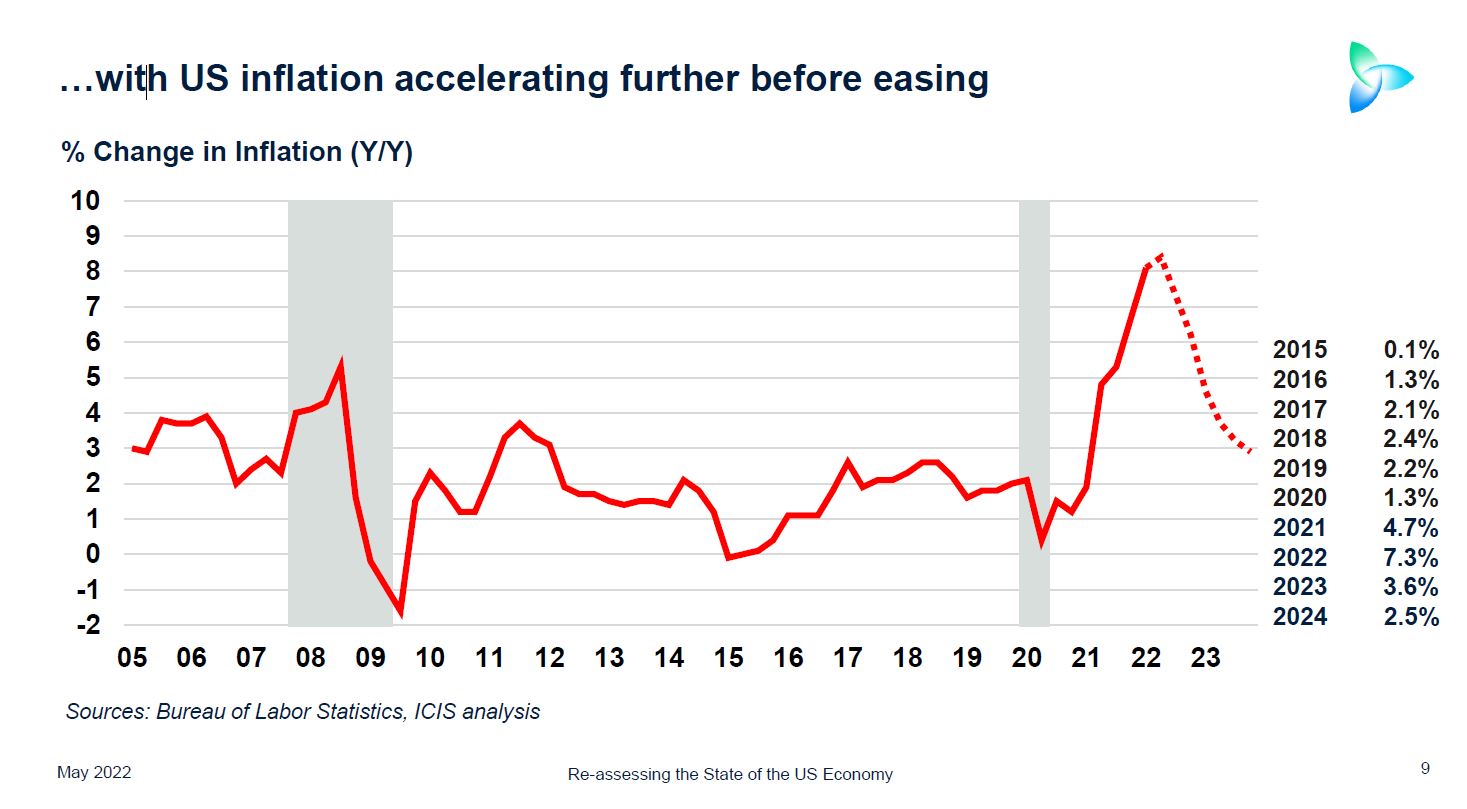 A peak in US inflation is yet to be seen. The April Consumer Price Index (CPI) rose by another 0.3% from March and is up an eye watering 8.3% year on year. At least the monthly pace of gains moderated in April as March saw a 1.2% month-on-month gain.

Globally, the Russia/Ukraine war is further exacerbating inflation with higher energy and commodity prices and logistics constraints while China’s COVID lockdowns add to such constraints while also severely straining its economy.

“Inflation has been heating up around the world and the outlook for inflation is elevated. The world has radically changed,” said ICIS senior economist Kevin Swift, who also pointed to supply chain disruptions persisting.

Swift spoke at the 12th ICIS World Surfactants Conference in Jersey City, New Jersey, US on 10 May. 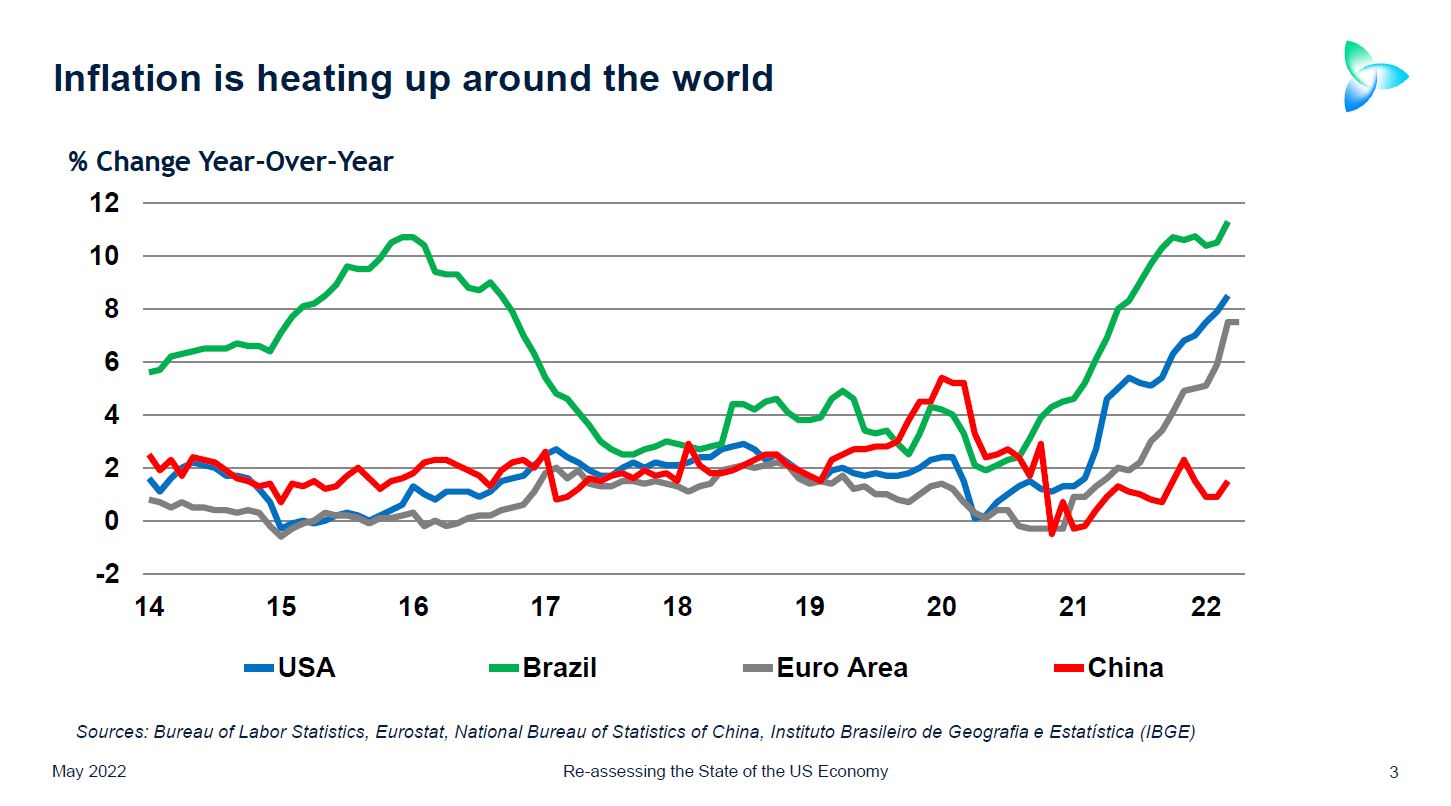 Prices are elevated everywhere in the world except China, where the ICIS economist sees CPI inflation of just 2.4% in 2022 and 2.5% in 2023.

US inflation will likely accelerate through Q2 or Q3 before easing, bolstered by rising wages even as certain prices, such as those for new and used cars, moderate, he noted.

“Labour is still tight, and this challenge will be with us for years because of demographics,” said Swift.

The odds of recession in the US in the next 12 months is around 35%, according to Swift. 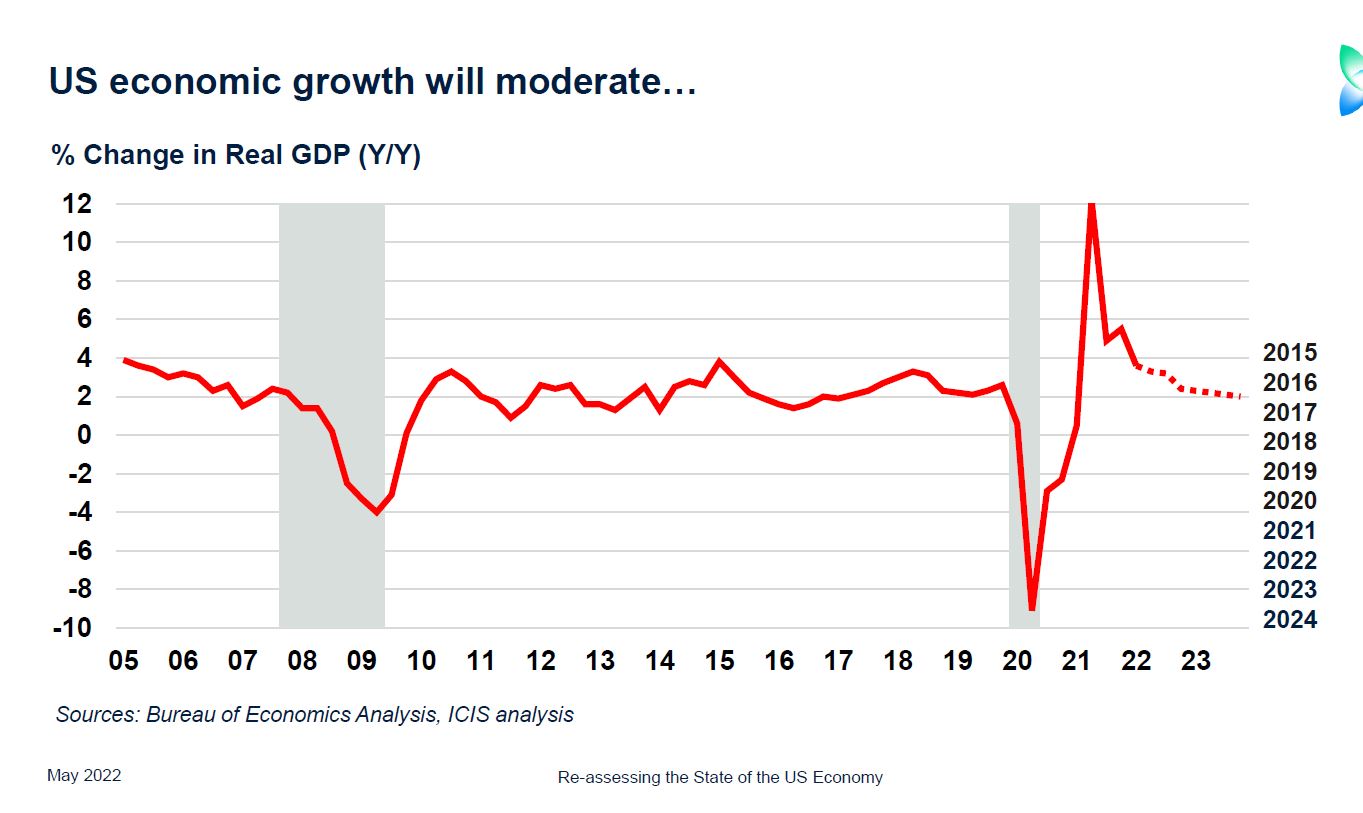 Thus far, in numerous conversations with chemical industry executives and sifting through quarterly earnings conference calls, we haven’t seen it. That doesn’t mean it’s not coming.

“We have worried a lot about demand destruction in the past and customers are always working on thrifting along the edges, but I’m just not seeing it or hearing it in our customer conversations to any meaningful degree,” said Ed Sparks, president of Titanium Technologies at Chemours, in an interview with ICIS.

“Right now, I’m very pleased with the demand signals we’re seeing [out of Europe] but when you look at the disruption on the European continent and the knock-on effects of energy inflation and all the other factors… that’s an area we’re keeping our eye on very closely,” he added.

One clue as to why we’re not seeing demand destruction even in the face of rapidly rising prices is that customers are still scrambling to build inventory given the dismal state of the supply chain. In many cases they are double or triple ordering.

The trend of buyers overbooking orders to ensure sufficient supply is unlikely to end anytime soon as logistics constraints persist, panellists at the 12th ICIS World Surfactants Conference said on 10 May.

“I don’t see this trend going away anytime soon. Unless sea freight rates decline, then [overbooking] and hoarding will continue,” said Eric Byer, president and CEO of the National Association of Chemical Distributors (NACD).

“People have said things will ease in Q3 or Q4 but I don’t believe them. Until you can see the reality [of conditions easing], you have to continue to expect the worst,” he added.

Suppliers must have a line of sight to customer inventories to be able to manage their own.

“If we can see them dial it down, then we can dial it down. Right now, there are just too many orders out there,” said John Louge, CEO of chemical distributor Royale Group.

Because of customers overbooking orders as well as longer lead times from suppliers, distributors are holding more inventory. Royale Group is holding three times as much inventory than normal, with lead times from Chinese suppliers lengthening, Louge noted.

So what happens when one day, supply chain constraints ease and those double and triple orders disappear? Demand destruction will appear when buyers stop panicking and overbooking orders.

US RESILIENCE
The US economy may ultimately prove relatively resilient with housing still strong, job gains continuing and wages rising. Plus, the large US oil and gas sector is benefiting from higher energy prices.

Europe and China are more vulnerable – Europe from its reliance on Russian oil and gas (and sky high natural gas prices) and China from its property sector crash and zero-COVID policy, which continues to manifest in widespread lockdowns in key commercial centres.

While inflation and the resulting aggressive response by the US Federal Reserve in raising interest rates and reducing its balance sheet will pressure the US economy, other key leading indicators, including the ICIS Leading Business Barometer (LBB), are not signalling recession. 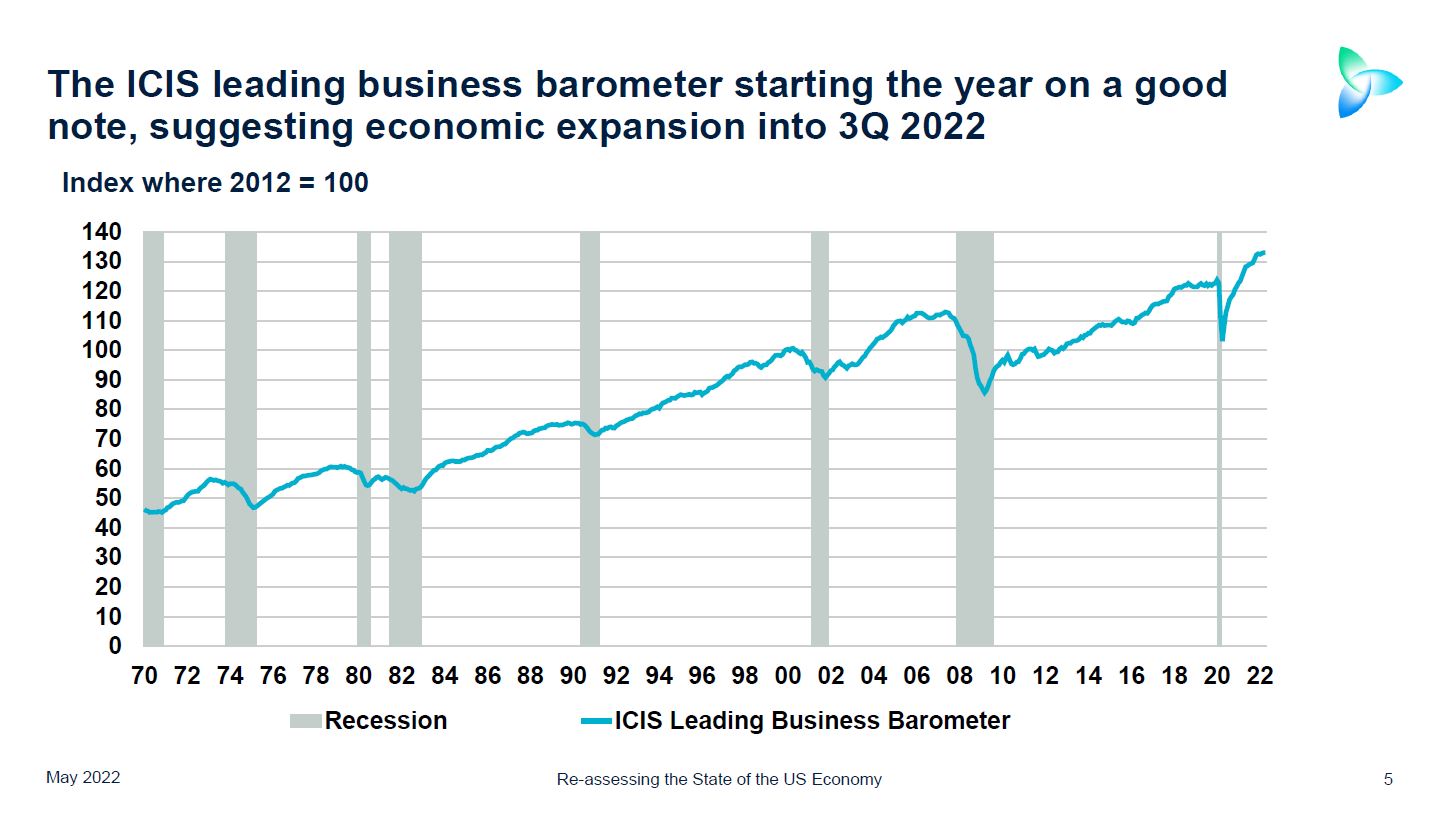 “The ICIS LBB typically peaks eight months before a recession and this key indicator has yet to peak. However, US economic growth will moderate,” said Swift.

The ICIS LBB for April was unchanged from March. As a rule of thumb, the ICIS LBB would have to fall for three consecutive months with an accumulated decline of 3% to signal a recession.

Another key leading indicator, and likely the best gauge for the health of the manufacturing and services sectors, is the Purchasing Managers’ Index (PMI)

The US PMIs for manufacturing and services are still in expansion territory (above 50) but pointing to slowing growth.

For April, the US ISM Manufacturing PMI fell to 55.4, down 1.7 points from March, while the Services PMI eased 1.2 points to 57.1. Both are still firmly in expansion but trending lower.

On a global basis the S&P Eurozone Manufacturing PMI is on a similar path to the US – falling but still healthy at 55.5 for April. China is the exception, with the Caixin China General Manufacturing PMI slumping severely to 46.0 – no surprise with major production centres still locked down.

US HOUSING, AUTOMOTIVE, DEMOGRAPHICS
The US housing market faces headwinds from rapidly rising prices along with higher interest rates but demographics and societal trends are fundamentally sound, the ICIS economist noted.

“There is strong underlying demand. The Millennial generation will provide support for housing for the next 10 years,” said Swift, who also noted that surging housing prices and interest rates are starting to push people out of the market.

Automotive faces more of a challenge with semiconductor shortages persisting. The ICIS economist forecasts US light vehicle sales of 15.2m in 2022, just slightly ahead of the capacity constrained 15.0m booked in 2021.

Overall, demographics is a positive factor for the US economy, unlike in most western economies, with Millennials (born 1981-1996) moving into prime home buying and purchasing ages being positive for overall chemicals demand, said Swift.