High inflation to dent demand; supply chain costs increase by up to 60% in Q1 – SABIC CEO

MADRID (ICIS)–SABIC is facing “numerous challenges” related to supply chain woes as well as higher production costs while high inflation could end up denting end demand, the CEO at the Saudi petrochemicals major said on Thursday.

Yousef Al-Benyan said the war in Ukraine has not “strongly and directly” impacted SABIC’s operations, adding the company had managed to avoid the worst of the supply chain disruption caused in Europe by Russia’s invasion.

Speaking to reporters from Riyadh after the company published earlier on Thursday healthy first-quarter results, he added however that during the January-March production costs – on the back of higher energy prices – and supply chain costs had risen sharply.

“SABIC did not have any direct exposure to the Russian or Ukrainian markets. Nobody welcomes the war, and the impact it will have will be negative for energy markets but also for the key agricultural nutrients [fertilizers] of which Russia and Ukraine are strong producing countries.”

BLURRIER OUTLOOK
Despite healthy performance year to date, Al-Benyan conceded that high inflation caused by higher commodity prices could end up denting end demand as consumers become more selective on their spending as their budgets get squeezed.

This, in turn, would have an effect in petrochemicals selling prices, he added. According to SABIC’s price index (see bottom graph) its selling prices have increased over the past quarters at a faster pace than those for crude oil.

“Our outlook contemplates a slowdown of the world economy. And I think inflation will play an important role and could impact demand for products, and thereby [selling] prices will be affected accordingly,” said Al-Benyan.

“Until the second half of 2022, we will be facing pressure because of the economic slowdown, inflation, [and] the disparity of interest rates [across the world].”

The CEO added that SABIC’s stake in Switzerland-headquartered chemicals producer Clariant remains “strategic” for the future position of the company within the specialty chemicals sector.

According to Clariant’s 2020 annual report, SABIC’s stake in its capital structure stands at 32.22%; Clariant is yet to release its 2021 annual report after the company postponed its publication while investigating accounting issues, now concluded.

“Clariant is a part of SABIC’s strategy in our specialised business – we have been paying attention to Clariant and it remains a key part for our future strategy,” said Al-Benyan. 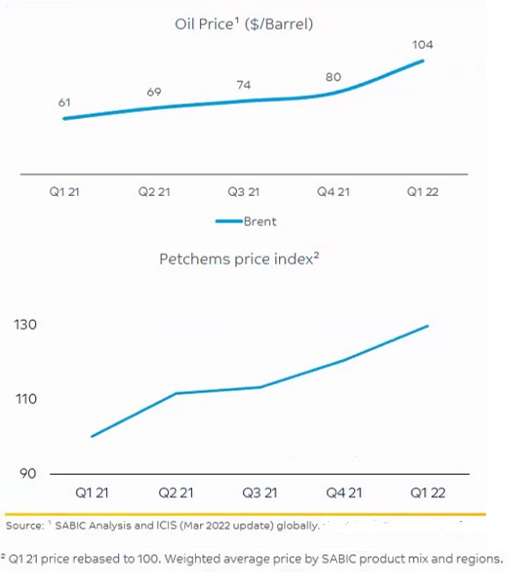