HOUSTON (ICIS)–Rates for shipping containers from east Asia and China to both US coasts have fallen by between 13-20% since COVID-19-related lockdowns began in Shanghai in March, and with China holding fast to its zero-COVID-19 policy, the trend could continue.

The impact of the lockdown measures on China’s available exports has been significant, leading to the major ocean shipping alliances announcing cancellations of at least a third of their scheduled sailings out of Asia through early June. 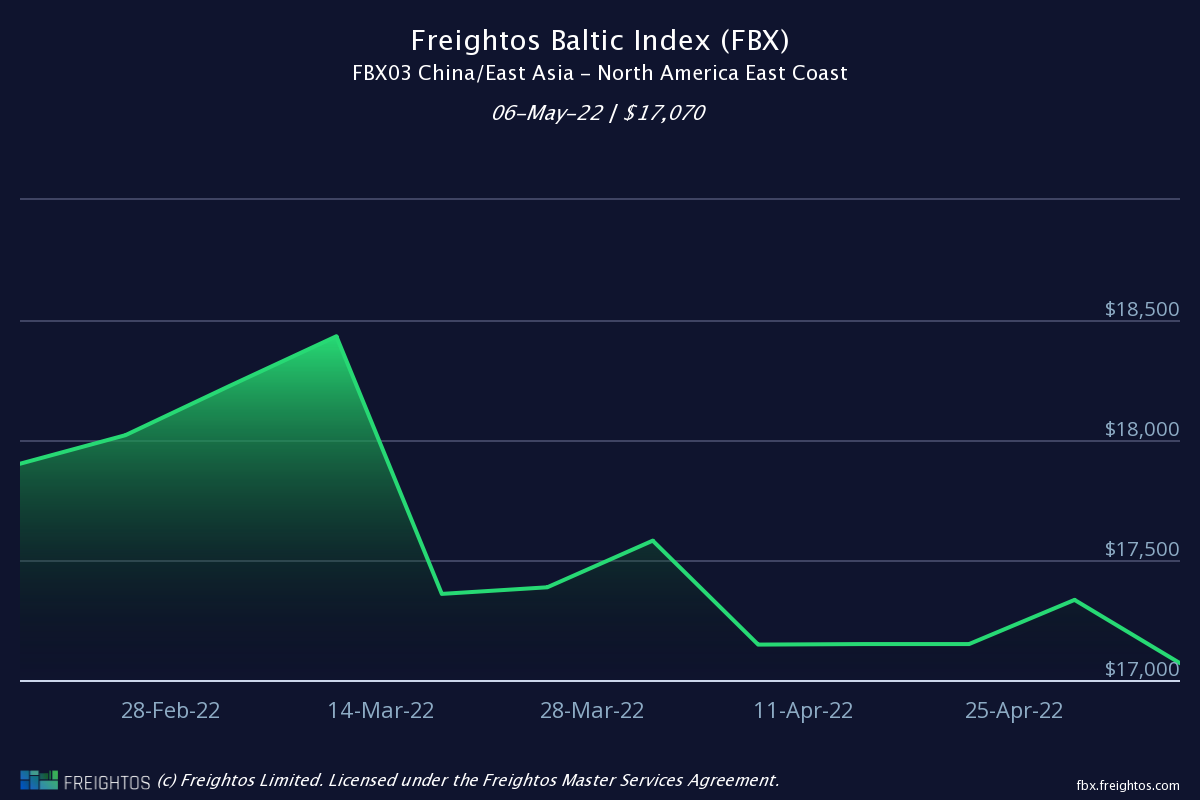 While the increase in blank sailings will have a more immediate impact on the Asia-to-Europe services than the transpacific, the removal of capacity could stabilise rates even as demand remains suppressed, according to Judah Levine, head of research at online freight shipping marketplace and platform provider Freightos. 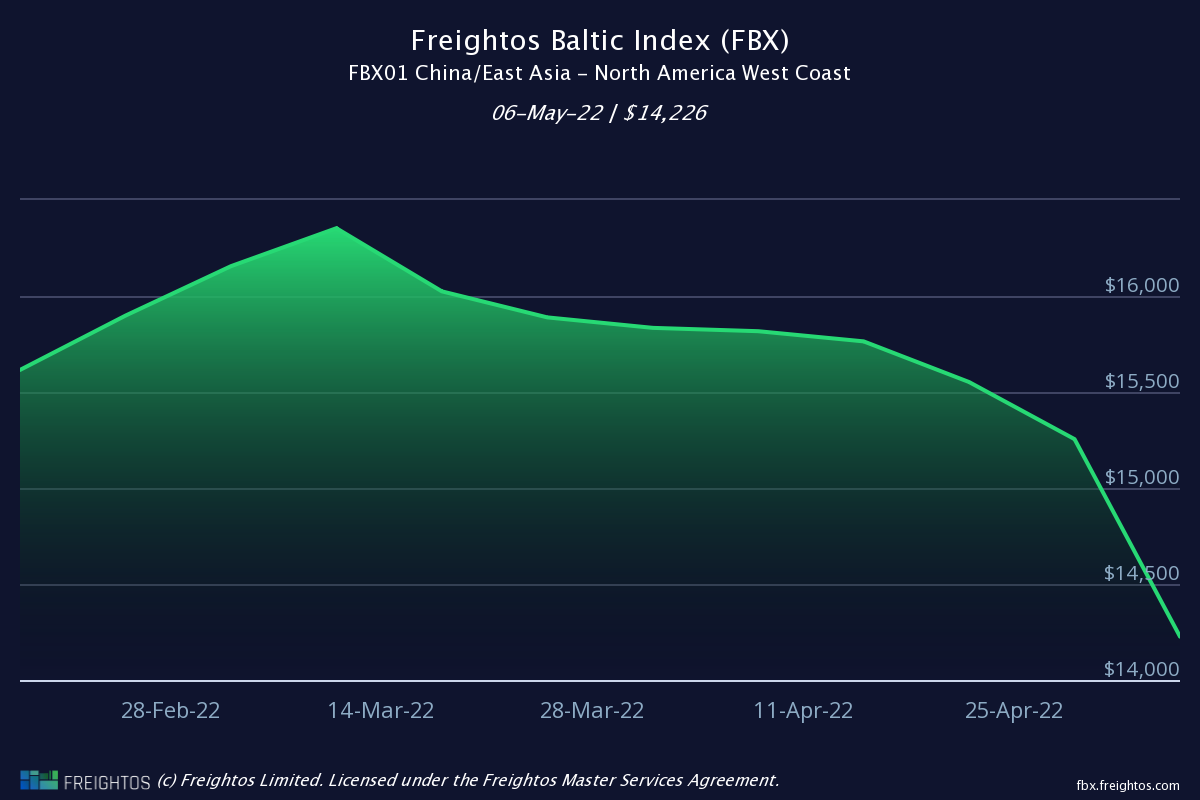 There are still concerns that once the lockdowns in China end, there will be pent-up demand needing to be met, which could lead to another surge in ocean volumes and upward pressure on rates.

Levine said that even though COVID-19 cases have fallen to a six-week low in Shanghai, recent comments by China’s president, Xi Jinping, point to an adherence to the country’s zero-COVID-19 policy and a gradual reopening.

The three ocean carrier alliances and their members are:

US regulator interest in container shipping has increased amid supply chain constraints that first started appearing as the US and other global economies began reopening after lockdown measures to help stop the spread of the coronavirus.

Both houses in the US legislature have passed versions of the Ocean Shipping Reform Act, which would expand the oversight of the FMC, allowing them to address what could be considered unfair contracting practices from ocean carriers.

US DEMAND REMAINS STRONG
Despite inflation, still-elevated shipping costs, Shanghai lockdowns and a gradual shift in consumer spending from goods to services, US container ports on both coasts are still reporting record import volumes. 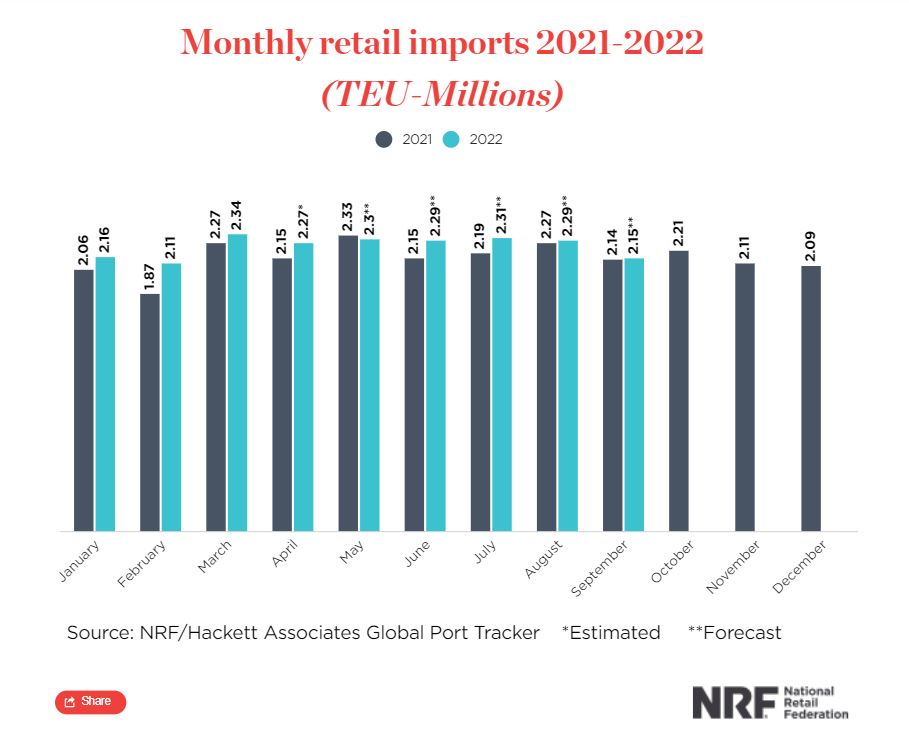 The National Retail Federation (NRF) said retailers are importing large volumes to meet current consumer demand, but also to get ahead of inflation.

“Retailers are importing record amounts of merchandise to meet consumer demand, but they also have an incentive to stock up before inflation can drive costs higher,” NRF vice president for Supply Chain and Customs Policy Jonathan Gold said.

The industry trade group said in its monthly Global Port Tracker, produced jointly with Hackett Associates, that March volumes rose by 10.8% from February and by 3.2% year on year.

Ports have not yet reported April numbers, but the Global Port Tracker projected the month at 2.27m TEUs (20-foot equivalents), up 5.7% from the same month a year ago.

May is forecast at 2.3m TEUs, which would be down 1.4% from last year but nonetheless the third-highest level on record, the NRF said.

CONGESTION EASING AT WEST COAST PORTS
Meanwhile, the backlog of container ships waiting to be unloaded at the Pacific Coast ports of Los Angeles and Long Beach was one off the record low since the congestion began.

Kip Louttit, executive director of the Marine Exchange of Southern California (MESC), said there were 33 container ships backed up as of Wednesday, which includes two vessels at anchor, and 31 slow-speed steaming or loitering outside the Safety and Air Quality Area (SAQA).

The record high was 109 vessels on 9 January.

The twin ports have continued to delay the implementation of a container dwell fee that was first announced in October.

The Port of Long Beach said ageing cargo on its docks has fallen by 47% since the fee was announced.

The Port of Long Beach also said it has completed a new rail project aimed at increasing efficiency and relieving congested roadways by shifting more volumes to to trains.

UAE’s Borouge to sell 10% of its shares via IPO; to list in Abu Dhabi