ICIS leading business barometer falls for second month in May

HOUSTON (ICIS)–The ICIS leading business barometer (LBB) fell for the second consecutive month in May, getting closer to indicating a recession.

The barometer reached 131.4 in May, down from 132.5 in April and 133.0 in March. A recession call would occur if the barometer fell for three consecutive months and if its cumulative decline reached 3%.

So far, the barometer has fallen for two consecutive months and the May figure is down by 1.2% from March.

Year on year, the May LBB rose by 2.5%, a much slower rate than in previous months.

Uncertainty in stock markets caused the decline. That uncertainty reflected monetary policy at the Federal Reserve and geopolitical events.

Issues facing companies including lingering supply-chain bottlenecks, capacity constraints in several industries and widespread labour shortages, he said. “Uncertainty about the future is very high due to tightening Federal Reserve policy, the war in Ukraine and the surge in energy costs.”

The share of expanding indicators, called diffusion, fell to 53% from 65% in May.

Among the indicators rising were production-related ones for materials and other industries sensitive to cyclical fluctuations.

Selling prices as well as costs for raw materials and other inputs increased. Equity prices were mixed.

Monthly data on the ICIS leading business barometer are available back to January 1947.

The following chart shows the LBB. 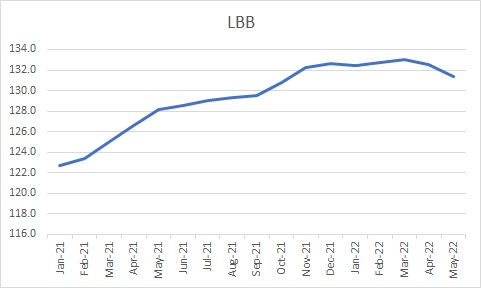