HOUSTON (ICIS)–US midstream companies are undertaking a surge of new projects, including gas pipelines, processing plants, fractionators and even ethane and ethylene terminals on the Gulf Coast.

Oil producers need midstream projects to take away excess gas produced from their wells so they can produce more crude.

Midstream projects also extract ethane, propane and other natural gas liquids (NGLs) from raw natural gas. Such NGLs are the predominant feedstock used by the US to make olefins.

The completion of these projects should provide US chemical companies with more feedstock, helping them maintain their cost advantage against much of the world, which relies on oil-based naphtha as a feedstock.

PERMIAN REBOUND
Midstream companies are building more projects because of rising production of oil and natural gas natural gas in the Permian and regions along the Gulf Coast.

An executive at the midstream company Enterprise Products said that 75-80% of the rig count in the US is Permian, the Eagle Ford in south Texas and Haynesville Shale, a natural-gas play in Louisiana.

Unlike the US as a whole, energy production in the Permian has already recovered to pre-pandemic levels

That transition to gas production has quickened because companies have already drilled many of the choicest and most productive oil wells in the Permian. The remaining ones exhaust their oil production quicker.

That has not stopped oil companies from drilling more wells. The region has some of the lowest production costs in the US, as shown in the following chart. 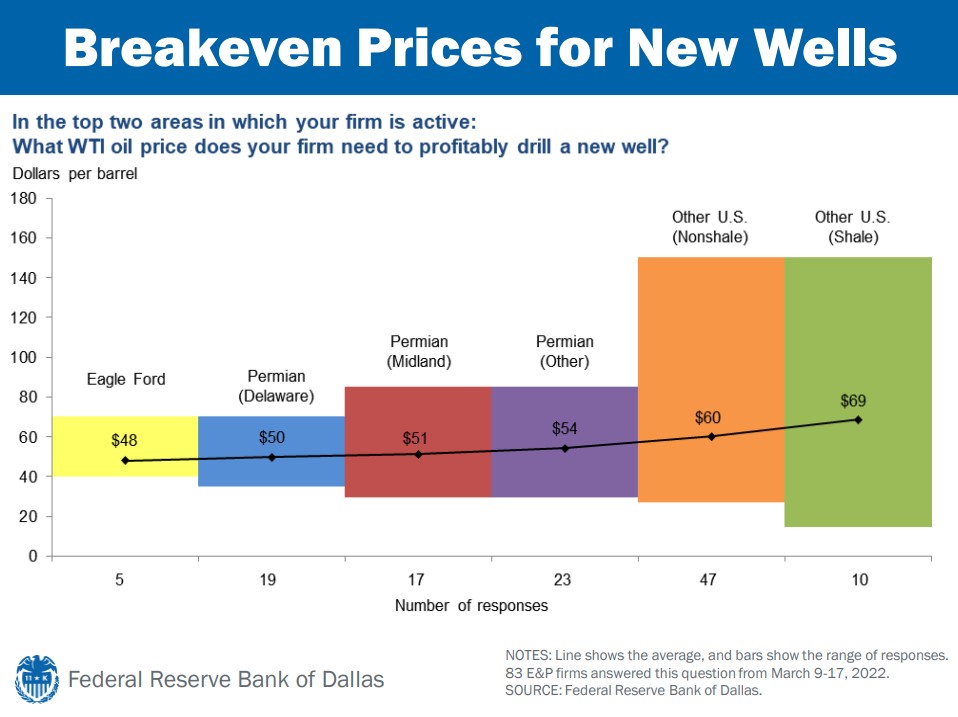 High energy prices have made Permian wells even more lucrative. Even though oil companies have pledged to be more disciplined with their spending, they are still drilling more wells to take advantage of oil prices, which have remained above $100/bbl.

Texas still has plenty of pipeline capacity to handle additional oil production in the Permian, according to Enterprise Products, a US-based midstream company. The constraint is natural gas.

The Permian is on track to exhaust capacity to take away growing gas production, as shown in the following chart by Enterprise. 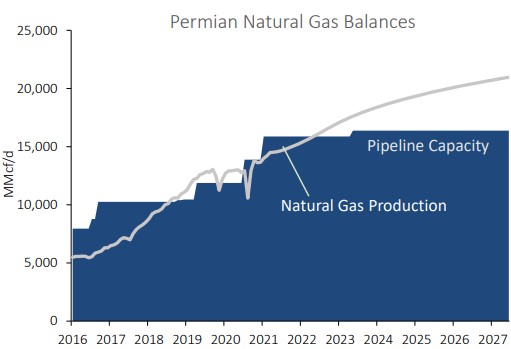 Other midstream projects include processing plants, which remove NGLs and impurities from raw gas so it can be burned as fuel. Fractionators receive NGLs and separate the individual products such as ethane.

“That will obviously be a big pull on not only the processing but also the pipeline takeaway capacity,” said Tim Aydt, chief commercial officer for the midstream company MPLX. “You’re going to continue to see investments needed across the midstream in that regard.”

Enterprise
Enterprise plans to start up the Midland Basin Plant 6 natural gas processing plant in the second quarter of 2023. The plant will process 300m cubic feet/day.

Enterprise’s Mentone II natural gas processing plant should start up in the second half of 2023. Its capacity will be 300m cubic feet/day.

The company is considering a natural-gas pipeline to take away natural gas from western Texas, Enterprise said during an earnings conference call.

Enterprise plans to start up its Frac 12 fractionation plant in the third quarter of 2023. The plant will be near Mont Belvieu, Texas, and can process more than 150,000 bbl/day of NGLs.

The company could start up another ethane export terminal in 2025 on the Gulf Coast. It has not determined the capacity or site for the terminal.

Enterprise plans to double its ethylene export capacity to 2m tonnes/year by 2025.

MPLX
MPLX, WhiteWater Midstream and a joint venture made up of Stonepeak Infrastructure Partners and West Texas Gas plan to expand the Whistler Pipeline to 2.5bn cubic feet/day from 2bn cubic feet/day.

The expansion should start up in September 2023 and connect the Permian to south Texas.

In the second half of 2022, MPLX plans to start up Tornado-2, a 200m cubic feet/day processing plant in the Delaware basin in western Texas.

The Permian a big growth area for the company, said Greg Floerke, chief operating officer. “I think it’s going to continue, obviously with crude prices being where they are and gas prices, there is going to be continued growth in that area tied to takeaway capacity.”

EnLink, WhiteWater, Devon Energy and MPLX made a final investment decision to build the Matterhorn Express Pipeline, which will ship 2.5bn cubic feet/day of natural gas from the Permian to the Katy area near Houston. That pipeline should start up in Q3 2024.

Kinder Morgan
Kinder Morgan is soliciting commitments to expand its Permian Highway Pipeline by nearly 650m cubic feet/day. The expansion will ship gas from the Waha area in western Texas to Katy and other markets on the Gulf Coast.

Kinder Morgan is lining up commitments for another expansion project – the Gulf Coast Express Pipeline – that would increase capacity by nearly 570m cubic feet/day. That pipeline will ship gas from the Permian basin to south Texas.

If Kinder Morgan pursues the project, it should start operations in 1 December 2023.

It is building a new processing plant in the Permian Delaware in western Texas that should start operations in the third quarter of 2023. That plant, called Midway, will have a capacity of 275m cubic feet/day.

OTHER BASINS
For the most part, other major inland basins have yet to return to their previous peaks, as shown in the following table, compiled from the drilling productivity report of the EIA.

It shows oil production as bbl/day and natural gas as millions of cubic feet/day (Mcf/day) forecasted for June 2022. The table also shows the record months since 2007.

Louisiana’s Haynesville has set new records for natural gas production. It is benefiting from high gas prices, access to infrastructure and proximity to industrial plants, LNG plants and other demand centres.

Although gas production in Appalachia is at an all-time high, it has remained at 34m-35mcf/day for more than a year.

The region is running out of pipeline capacity, which is limiting the ability of companies to take advantage of higher prices and produce more gas.

The Mountain Valley Pipeline, which will span 303 miles (488 km) from West Virginia to southern Virginia, continues to get delayed and become more expensive. The project, budgeted at $5.4bn and scheduled for Q1 2021 start-up, could now cost $6.6bn and start up in the second half of 2023, said Equitrans Midstream, the company developing the pipeline.

The energy industry has blamed antagonistic administrative policy, unfavourable court decisions and red tape for the delays in infrastructure.

It told the Federal Reserve in its Beige Book survey that inflation and labour shortages are making it harder to increase production.

To placate investors, energy companies are exercising more restraint on spending after spending years as one of the market’s worst stock performers.