NEW YORK (ICIS)–The global chemicals sector must prepare for an economic recession as central banks raise interest rates to tamp down rampant inflation and surging food and energy prices take a big bite out of consumer paychecks and industrial profits.

“The effects of higher energy and food prices, protracted inflation, tightening monetary policy across the world and the war in Ukraine has heightened the odds of recession,” said Kevin Swift, ICIS senior economist.

Capital spending for major chemicals projects will slow even further as managements become more conservative in the face of rising economic risks. Projects in the US and Europe have already been facing big headwinds from net zero greenhouse gas (GHG) emissions targets which require expensive decarbonisation measures.

CEO CONFIDENCE PLUNGES
In a recent survey of 750 global CEOs and senior executives by the Conference Board, more than 60% expect a recession in their geographic region in the next 12-18 months, while another 15% said the economy in which they operate is already in recession, reported the Wall Street Journal.

That is not a recipe for spending on major projects, especially for capital intensive industries such as chemicals. Most CEOs are not going to spend billions of dollars on capital projects in the teeth of an impending recession.

And if demand slows, as is widely expected, companies will be even less inclined to spend on big projects.

“Should demand slow and producers constrain production, it will push the operating rate down for most resins and chemical products,” said Swift.

“Capacity utilisation – along with demand expectations over the long-term and individual plant economics – is the prime driver of capex and I would expect this to face more headwinds. Recession would normally cause a decline in capex,” he added.

Likewise, we can also expect a big slowdown in major acquisitions activity by chemicals companies.

EUROPE CAPEX FACES BIGGEST HIT
In Europe, prospects for investment have been further dampened by elevated energy and feedstock prices, even before the Russia-Ukraine war. With the new era of energy volatility particularly hitting Europe, with Russia already partially cutting off gas supplies, you can forget about any new major petrochemicals projects in Europe.

INEOS recently announced this week it will not proceed with its previously planned €500m vinyl acetate monomer (VAM) project in the UK, announced in 2017, “given the volatile and uncompetitive energy costs outlook” the UK faces. Instead, it is conducting a feasibility study for a flagship new acetic acid production unit on the US Gulf Coast with a final investment decision (FID) planned by the end of 2023.

In the US, the massive build-up of inventories at key big box retailers such as Wal-Mart, Target and Home Depot will take a toll on chemicals and polymers demand as retailers unwind bloated stocks in Q2 and Q3.

This inventory unwind will take place as consumers put the brakes on spending. US retail sales in May declined 0.3% from April but were still 8.1% higher than year-ago levels – not surprising given soaring inflation.

“For US chemicals, durable goods order patterns will likely become choppier as inventories in the retail channel normalise, and demand for construction chemicals likely slows around year-end,” said Jefferies analyst Laurence Alexander in a research note.

US HOUSING FINALLY CRACKS
The US housing market, a bastion of strength for the economy and a key end market for chemicals, is finally showing signs of cracking under the weight of soaring interest rates and rising home prices.

US housing starts in May plunged 14.4% from April to a seasonally adjusted annual rate (SAAR) of 1.70m units which were also down 3.5% from a year ago.

“The weight of a rapid doubling of interest rates over six months, together with accelerated price appreciation, began to drive buyers in many markets to pause and reconsider. We began to see these effects after quarter end,” said Stuart Miller, executive chairman of Lennar, one of the largest homebuilders in the US, on 21 June on the release of Q2 earnings.

“The Fed’s stated determination to curtail inflation through interest rate increases and quantitative tightening have begun to have the desired effect of slowing sales in some markets and stalling price increases across the country,” he added.

The latest reading of the ICIS Leading Business Barometer (LBB) for the US economy shows the indicator falling for the fourth consecutive month in June with a cumulative decline of 2.6% since the February peak.

Swift’s rule of thumb for a recession signal is three consecutive months of decline in the ICIS LBB and a cumulative decline of 3.0%.

“We are not there yet, but the latest reading indicates that overall US business activity will appreciably slow and that a turn in the economic cycle is possible,” said Swift. 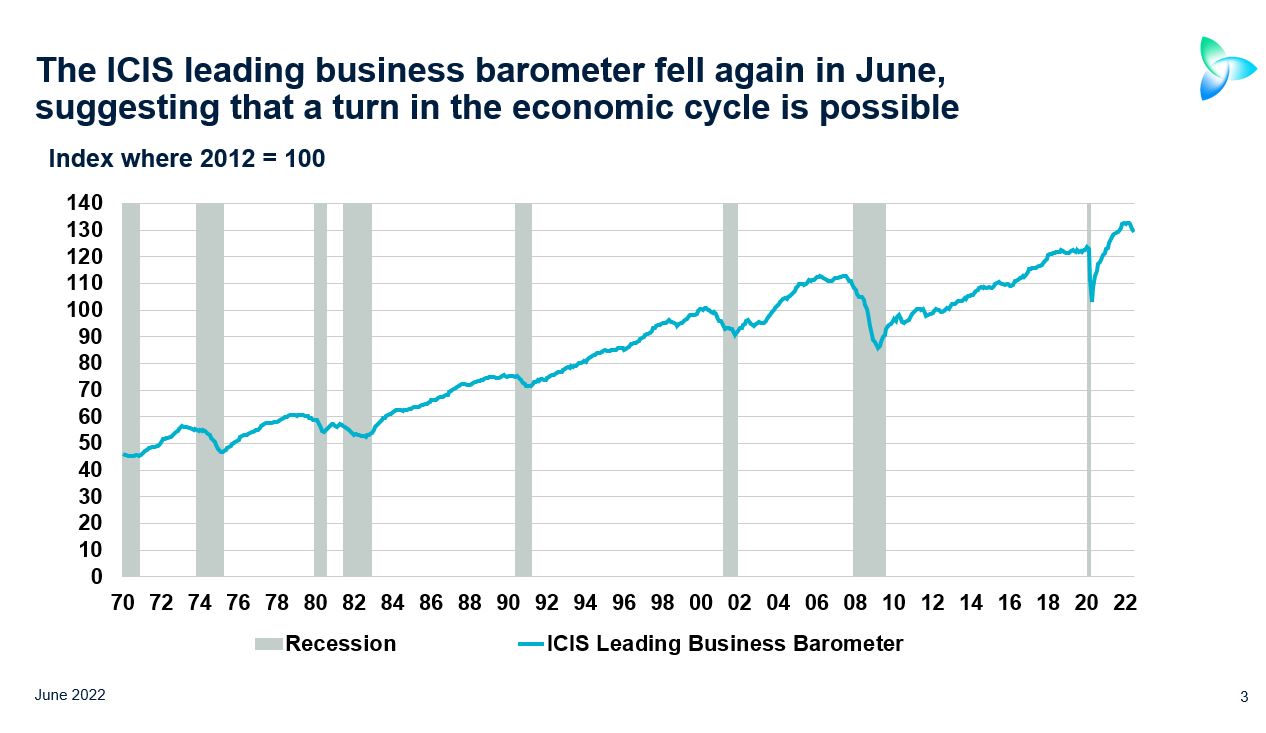 Ultimately, the recession threat (not to mention an actual recession) coupled with the decarbonisation trend and energy volatility could create a giant gap in chemicals and polymers capacity in the coming years – at least until it becomes apparent that more expensive, low or zero carbon projects provide a solid return on investment. But this will take time.

Additional reporting by Will Beacham and Tom Brown