US Q2 GDP fell 0.9%, economy may have entered recession – BEA

HOUSTON (ICIS)–US real gross domestic product (GDP) decreased at an annual rate of 0.9% in Q2, following a 1.6% decrease in Q1, the Bureau of Economic Analysis (BEA) said on Thursday in an advance estimate of Q2 GDP trends.

Although the BEA did not use the term recession, the Q2 data indicates that the economy entered into a technical recession, which is defined a two consecutive quarters of negative growth.

Inventories were an issue as retailers and others stocked up for demand that apparently did not develop as anticipated, Swift said.

Residential investment came off due to higher mortgage interest rates and the loss of affordability, he said.

Business investment went from a strong contributor in 1Q to a drag in 2Q, as it eased slightly.

Consumer spending slowed as well, but was still positive.

Offsetting this was a turnaround from a negative 1Q contribution to a positive 2Q contribution in net exports of goods and services, Swift said.

Regarding discussions about using the word “recession” – or the “R” word – Swift said that “there will be years of debate” as to what Thursday’s Q2 GDP release means.

“And plenty of ink will be spilled in papers, analyses, etc,” he said.

While a common definition of recession is two quarters of negative GDP growth, the proper definition is something else, he said, pointing to the definition by the National Bureau of Economic Research (NBER).

“Using that definition – and it’s what I’ve always used – it appears that we are not in recession,” Swift said.

“We can’t say the recession started in the first quarter; the four indicators that the NBER uses were all largely positive, even into the second quarter,” he said.

Only time and more data will tell whether the data indicating recession are pronounced, pervasive and persistent, he said.

“We aren’t there yet. If we are in recession, and I caution with a strong ‘if’, a case could be made of a peak in June. Again, only time and data will tell,” he said.

“That said, our ICIS leading business barometer peaked in February and is now signalling conditions consistent with recessions in the past,” he added.

Those decreases were only partly offset by increases in exports and personal consumption expenditures (PCE).

Imports, which are a subtraction in the calculation of GDP, increased.

The smaller 0.9% decrease in Q2, compared with Q1’s 1.6% decrease, reflected an upturn in exports and a smaller decrease in federal government spending that were partly offset by larger declines in private inventory investment and state and local government spending, a slowdown in PCE, and downturns in nonresidential fixed investment and residential fixed investment. Imports decelerated, relative to Q1. 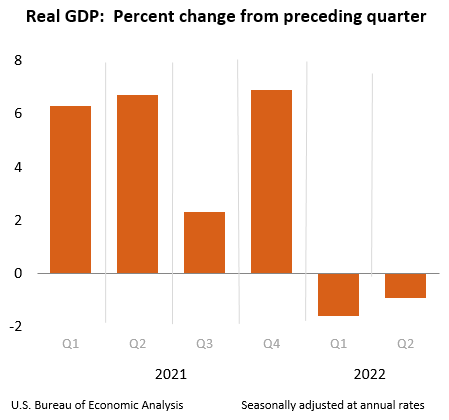 BEA will update the Q2 GDP estimate in a second estimate, based on more complete data, due to be released on 25 August.