MADRID (ICIS)–Chemicals companies on the River Rhine in Germany are having to hire additional barges to move product along the key waterway, which is set to increase their logistics costs during the third quarter.

Low water levels on the Rhine are allowing barges to load only partially, requiring more of them to be hired.

Evonik, LANXESS and Covestro – which have facilities along the banks of the river – have confirmed to ICIS they are hiring more barges due to the low water levels.

On Thursday, German chemicals major BASF – with its flagship site of Ludwigshafen also on the Rhine’s bank – warned some types of barges may not be able to navigate at all if the water levels continue falling.

During the 2018 drought, companies posted sharply higher logistics costs, with BASF’s at €200m just for the fourth quarter of that year, due to the hiring of more barges.

Evonik took a €35m hit during the second half of 2018, but most of it was in the fourth quarter, when the drought was more acute.

That is the worry across northwest Europe’s petrochemicals players: this year, the drought is already hitting in the third quarter, so the financial impact could be much larger if water levels continue low throughout H2.

On Friday, the Rhine’s navigable water levels at the Kaub gauge measuring point, the shallowest along the river, stood at 42cm, but are forecast to fall to 34cm by Tuesday (16 August), according to the German waterway information consultancy Elwis.

Evonik, LANXESS and Covestro’s main production facilities are located further north from Kaub, where water levels are not as low.

MORE BARGES, PLEASE
Evonik confirmed it has been prompted to hire more barges due to the low water levels for some time now, but also more trucks.

“At present, there are no significant restrictions on our logistics chains at Evonik due to the low water level of the Rhine. Our production is running,” a spokesperson told ICIS.

“Our impression is that many companies are now better prepared for the topic of low water on the Rhine than they were in 2018 – for example, by adaption of transport concepts, improved water level forecasts and optimisation of transport operations.”

The spokesperson went on to say that “several extraordinary challenges” persist for logistics in Germany’s chemicals industry, however, making it less attractive as an investment location.

“These challenges range, for example, from restrictions in rail freight transport due to necessary and long overdue infrastructure measures in the DB [the train operator] network, a lack of truck drivers in Europe, dilapidated canal locks and additional waiting times for inland waterway vessels in the seaports,” they said.

Covestro also said production at its German facilities located by the Rhine has not yet been impacted but confirmed it has had to hire additional barges for transport.

As well as hiring additional barges, Covestro said it is increasing the frequency of shipments and shifting some shipments to road or rail.

“As always at this Rhine water level, our Rhine Logistics Task Force has been activated and we are taking measures in line with our standard processes, such as filling raw material tanks and emptying product tanks to create buffer capacity,” said a spokesperson for the Cologne-headquartered producer.

“In addition, we are closely monitoring not only the level of the Rhine but also the development of the water level of the tributaries as well as the canals and their lock operations.”

Leverkusen-headquartered LANXESS also confirmed it has had to hire additional barges to transport material, but added it has not yet shifted transport to rail or road.

“If the level of the Rhine were to fall further, we could shift a certain proportion of our deliveries to rail and road as a supplement,” it said.

TROUBLE ON THE DANUBE
A spokesperson for Austria’s polymers and fertilizers major Borealis – part of energy major OMV – said waterway transport along the Danube River has also been hampered by low water levels.

It said the company has stopped using the Danube for fertilizers operations, which have key plants located in Linz by the Danube.

“For our fertilizer business, the drought has a high impact on transportation via waterways, currently mainly the Danube is at too low a level for using barges. This causes us to seek alternative transport means,” the spokesperson said. 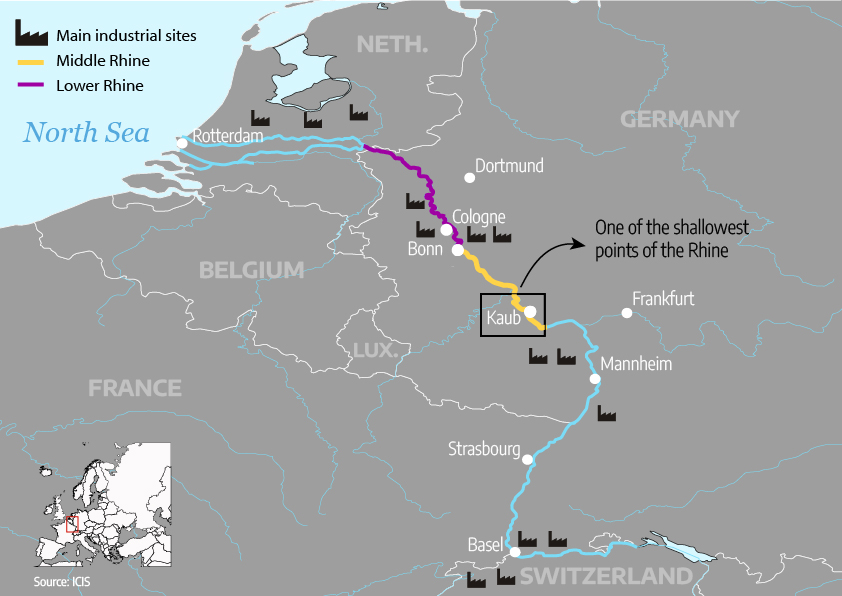 Additional reporting by Will Beacham and Nazif Nazmul