HOUSTON (ICIS)–Spot and contract rates for inland truck deliveries have fallen from record-highs as capacity has increased and demand has remained strong, according to panelists on a webinar hosted by supply chain market intelligence provider Freightwaves.

The panelists, from Uber Freight company Transplace, said the market is trending in the right direction but must remain agile as hard-to-predict events can still weigh on supply-demand dynamics.

Ben Cubitt, senior vice president of consulting, shared the results of a recent survey of trucking companies with anywhere from 200 to 4,000 trucks that showed improvement across several metrics.

SURVEY RESULTS
The Transplace survey showed that 60% of trucking companies added drivers over the year, while 20% were flat and 20% had fewer drivers.

“Of the 60% that added drivers, the biggest group grew as much as 10-15%,” Cubitt said. “So, what we are seeing is an increase in capacity as carriers have been able to add drivers.”

The driver shortage in the industry has been an ongoing issue.

According to data from the American Trucking Associations (ATA), the industry employed 3.36m drivers in 2020, which was down by 6.8% compared with the previous year.

More recent data was not available, but the US Bureau of Labor and Statistics (BLS) is projecting job openings to grow at 4% annually through 2031.

Another metric tracked by Cubitt is Seated Percentage, or what percentage of available trucks are parked because of not having enough drivers.

Earlier this year, the Seated Percentage had fallen to about 85%, Cubitt said.

But the number has improved, rising to 93-95%, which is closer to industry norms.

The panelists warned that the industry is still susceptible to global events and supply chain disruptions.

They cited examples of continuing COVID-19-related lockdowns in China, the threats of labour disruptions in ocean freight and railroads, and even the low levels of the Rhein river in Europe and what impacts that has on barge traffic.

Another metric is truckload weights.

The panelists said they are seeing drivers being able to get their truckload weights back up, which is also a contributor to increased capacity.

MORE STABILITY
The panelists said these metrics show more stability in the industry.

“Carriers are putting in a bit more stability and service in the network while still looking at some cost savings via sourcing or looking at spot market,” a panelist said.

Cubitt said spot rates topped $3/mile earlier in the year, but then saw significant decreases in Q1 and Q2.

He said they have leveled off over the past eight to 12 weeks but are still high compared with historical levels. 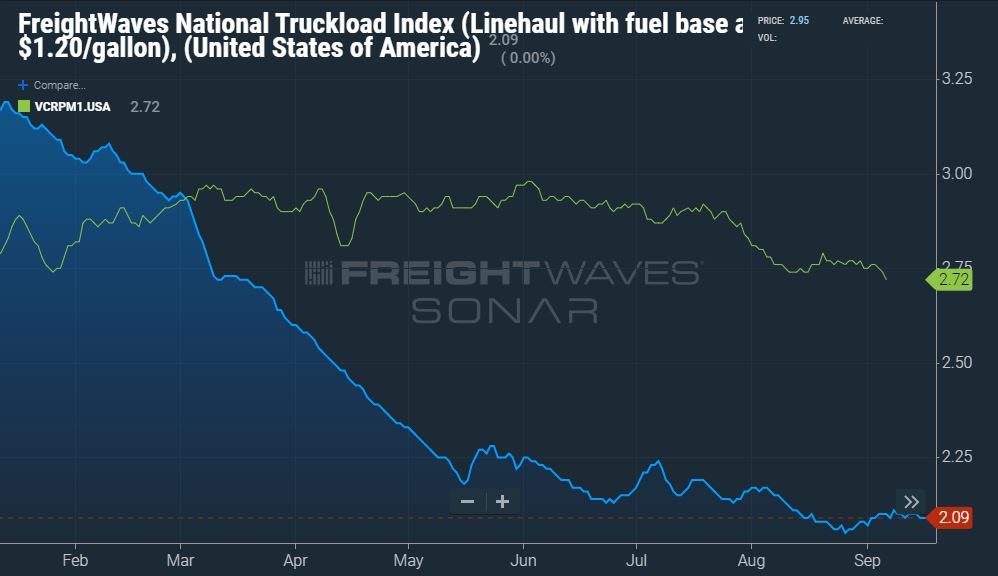 Spot rates, which fell below contract rates in March and have trended sharply lower, are 7 cents/mile lower since early August.

Matthew Harding, senior vice president of data science and engineering, noted during the webinar that another factor in an improved trucking outlook is that fuel costs have peaked.

“That helps a lot of smaller carriers trying to make money who may or may not be getting fully compensated for fuel,” Harding said.

LEARNING TO LIVE WITH VOLATILITY
When asked by a listener what the panelists learned from the COVID-19 pandemic, Mazen Danaf, senior economist and applied scientist, said learning how to live with volatility was the most valuable lesson.

He said that last year at this time, the industry was dealing with the question of whether or not there would be vaccine mandates, and if the government would pass an infrastructure bill.

“These are questions that were more important than everyday supply-demand dynamics,” he said.

Thumbnail image is a truck on the road. Photo by Shutterstock

EPCA ’22: European auto output will only recover to pre-pandemic levels in 2025 – analyst