HOUSTON (ICIS)–Europe will face a supply gap in 2023-2025 if Russia suspends gas shipments next year – but by the second half of the decade, liquefied natural gas (LNG) imports could meet demand, according to a study from the energy research firm Rystad Energy.

“The coming three to five winters will likely be difficult because there won’t be enough affordable gas in the global market for Europe to meet its demand,” said Francois-Regis Mouton, regional director, Europe, International Association of Oil & Gas Producers. It funded the study with the American Petroleum Institute (API), a US oil-and-gas trade group.

The following chart illustrates the supply gap, which factors out Russian shipments and expensive natural gas. One of the demand curves takes into account the EU’s Fit for 55 target. Another demand curve considers RePower EU. 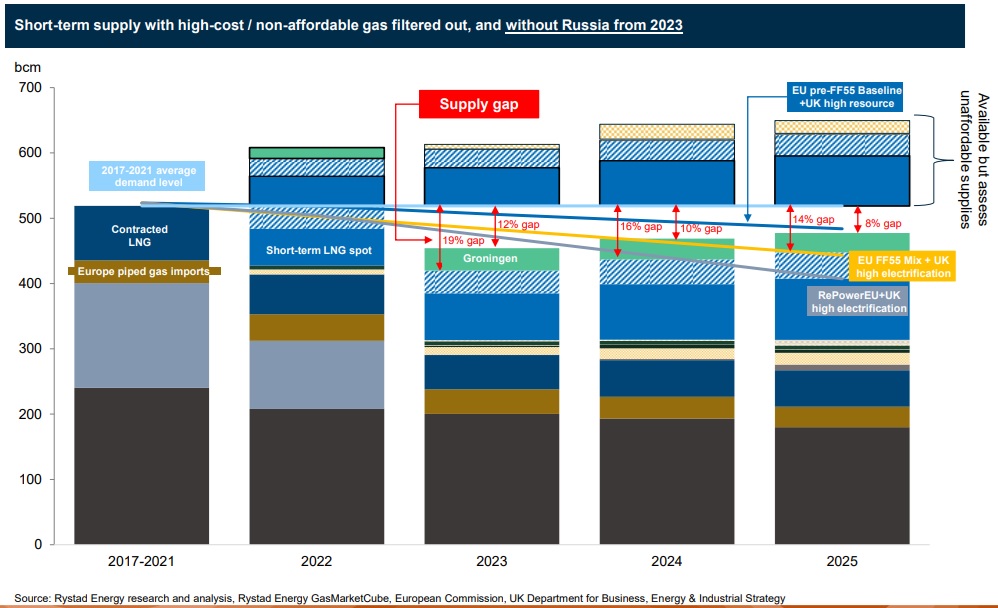 If Russia disrupts shipments, Europe cannot achieve its storage inventory target of 80% in October 2022 and 90% in 2023, according to the study.

The following chart illustrates the shortfall.

LIVING WITHOUT RUSSIAN GAS
During those lean winters, gas prices will become so high, they will attract spot exports of LNG, encourage European producers to max out gas output and pipeline imports while dampening demand, according to the study.

Every scenario that was considered by the study assumes that European gas demand will fall.

The resumption of production in Groningen, the Netherlands, could take the bite out of those difficult winters. Production there is scheduled to end in 2023. The study found that restarting Groningen will be critical to meet demand in 2023 if Russian supplies decline and LNG becomes exhausted.

More European supplies could come from shipping more gas via Gassco’s pipeline from the Barents Sea.

The study pointed to other sources of gas to Europe. Algeria could ship more to Spain if it reinjected less gas into oil fields to stimulate production, the study said.

Azerbaijan could export more through the TANAP if Turkey back-fills. An expansion on TANAP could raise capacity by 15 billion cubic metres (bcm)/year by the end of the decade.

The European supply situation improves by the second half of the decade because of the availability of LNG through long-term contracts, as shown in the following chart. 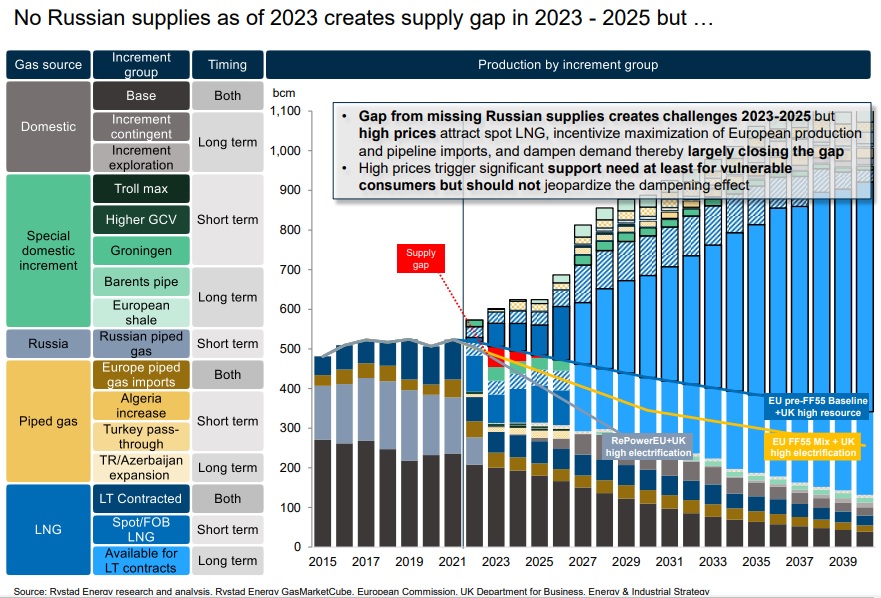 NORTH AMERICAN LNG TO OFFSET SHORTFALL
North America has the gas reserves to supply Europe’s new long-term gas commitments, the study said. It even forecasts that North America will become the largest supplier of LNG, as shown in the following chart.

“The study suggests that US LNG is the most feasible, reliable and competitive option,” said Dustin Meyer, vice president, natural gas markets, API. He made his comments during a presentation of the findings of the study.

North America’s export potential is limited by insufficient pipeline and liquefaction capacity and the study flagged permitting issues that make it harder to build energy infrastructure.

Meyer said the need for pipeline infrastructure is acute.

Recently, a bill that intended to make it easier to build US pipelines was proposed by Senator Joe Manchin (Democrat-West Virginia).

The API is reviewing the bill, but it noted in general that a bit of a consensus is growing to improve the permitting process in the US, Meyer said.

EUROPEAN REGIONAL OUTLOOK
As a whole, Europe has the infrastructure to handle a full displacement of Russian gas. But some regions will have an easier time than others.

The following chart summarises the supply and demand outlook for the European regions in 2023. Figures are in bcm/day. 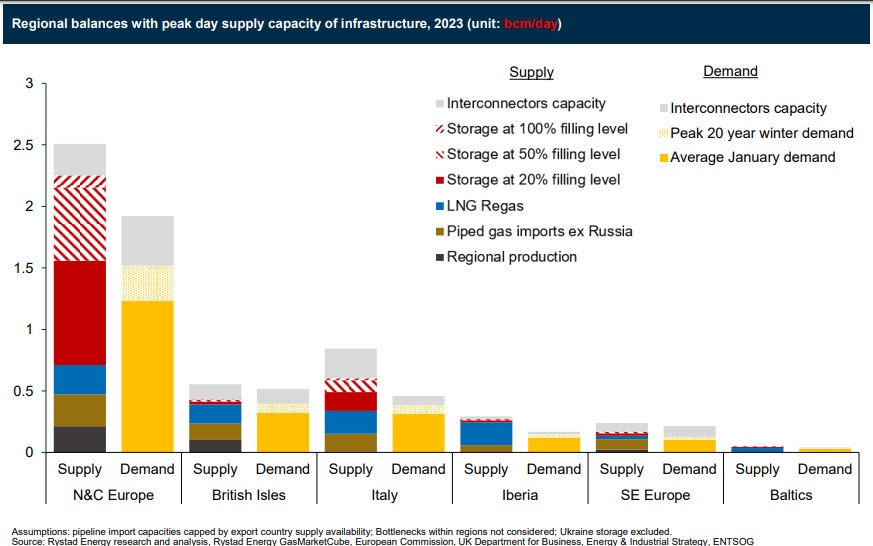