HOUSTON (ICIS)–The ICIS Leading Business Barometer (LBB) declined on Tuesday for the seventh consecutive month, falling further into the territory that signals a likely recession in the future.

The cumulative decline in the barometer is 5.9% from its February peak, exceeding the cumulative 3% threshold that has signalled past recessions.

As a rule of thumb, the barometer signals a US recession when it falls for three consecutive months and if the cumulative decline from a recent peak is 3.0%.

The barometer reached that threshold in July, and economic conditions have worsened ever since.

“The latest reading is consistent with recessionary conditions, and a turn in the economic cycle is likely,” said Kevin Swift, senior economist for global chemicals at ICIS.

The ICIS leading business barometer leads at US business cycle peaks by an average of seven months, with a range of two to 11 months.

Given the seven-month average and the barometers high in February, the barometer would point to the business cycle peaking by October and then falling into a recession.

Uncertainty about the future is very high because of the tightening of monetary policy by the Federal Reserve, the war in Ukraine and higher input costs, Swift said.

At best, production-related indicators were mixed among materials and industries that are sensitive to fluctuations in the economic cycle, he said. Costs for raw materials and other inputs fell, and selling prices declined.

The following chart shows the monthly performance of the barometer in 2022. July and August have been revised since the publication of the last LBB. 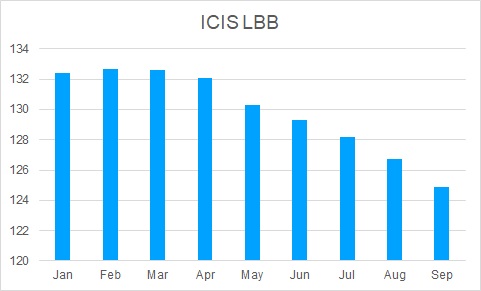 The ICIS leading business barometer is derived from 17 indicators relating to the following: