HOUSTON (ICIS)–Shipping container rates from east Asia and China to the US were largely stable this week, an indication that the sharp fall that began earlier in the summer may be levelling off as shippers have removed capacity from the trade lane to offset falling demand.

Weekly rates updated on Friday at online freight shipping marketplace and platform provider Freightos showed a slight decreases to the US West Coast and a larger decrease to the East Coast. 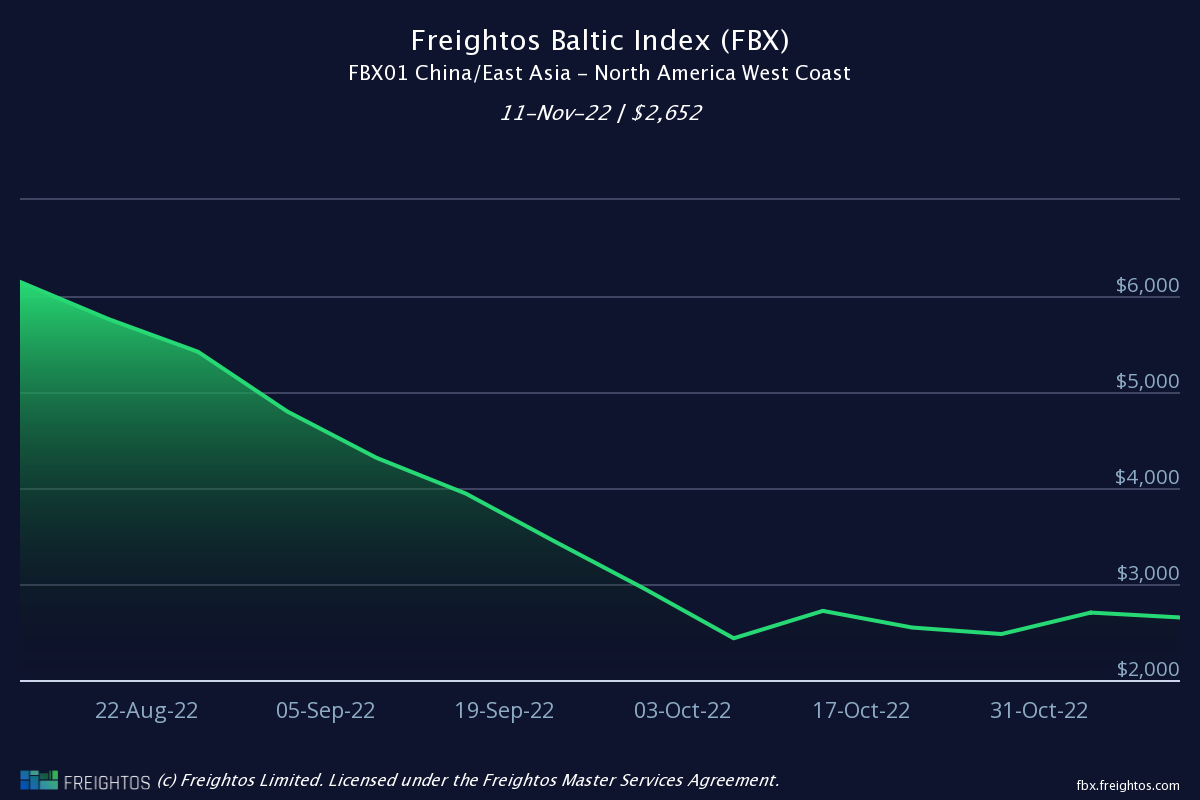 “The relatively strong volumes, together with congestion and reductions in capacity, are likewise still keeping ocean rates elevated compared to 2019, with ex-Asia rates to the West Coast 81% higher than in 2019, and rates to the East Coast more than double their 2019 levels. 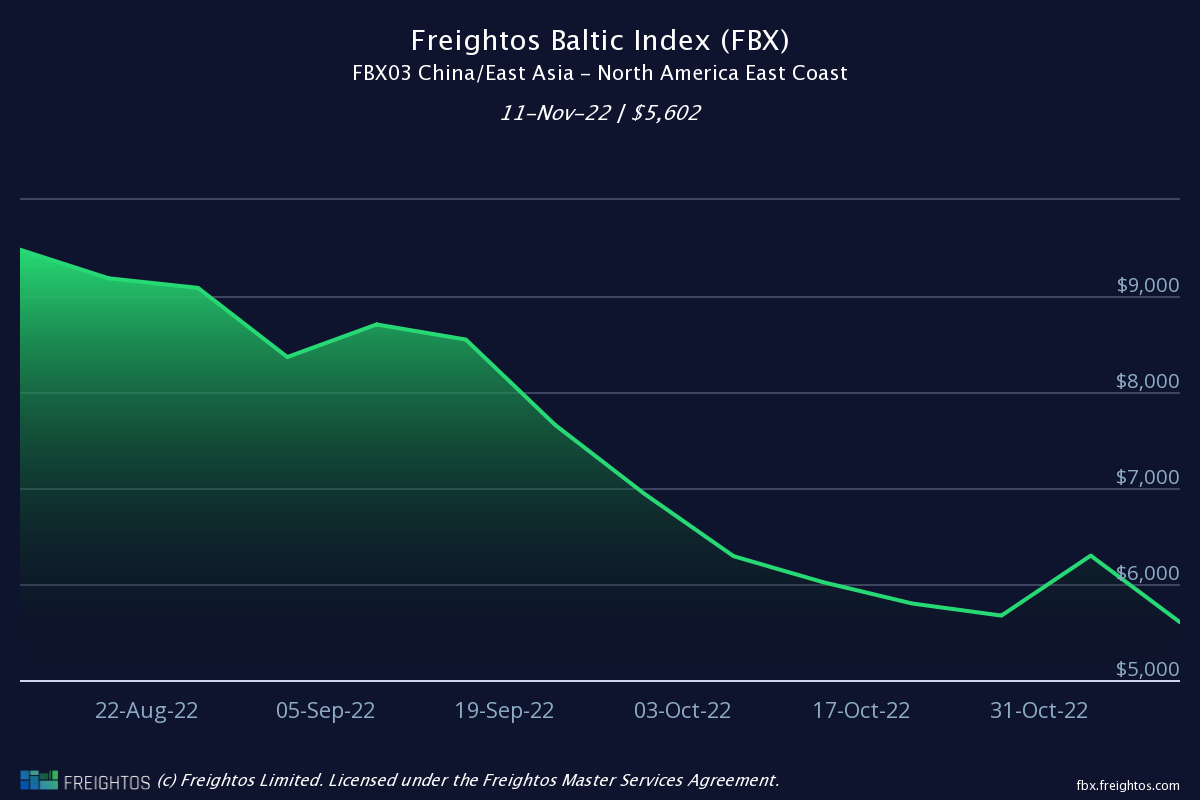 While retailers are expecting a busy holiday shopping season, imports at the nation’s major container ports are likely to continue slowing as cargo volumes that typically peak in the fall reached their apex in the spring this year, according to the National Retail Federation (NRF).

Jonathan Gold, NRF vice president for supply chain and customs policy, said many retailers ordered early this year amid efforts to avoid congested ports, and as concerns over port and rail labor negotiations and other supply chain issues persisted.

“With a rail strike possible this month, there are still challenges in the supply chain, but the majority of holiday merchandise is already on hand and retailers are well prepared to meet demand,” Gold said.

International trade consulting firm Hackett Associates said it expects the flattening of demand that began mid-year to continue into the first half of 2023. 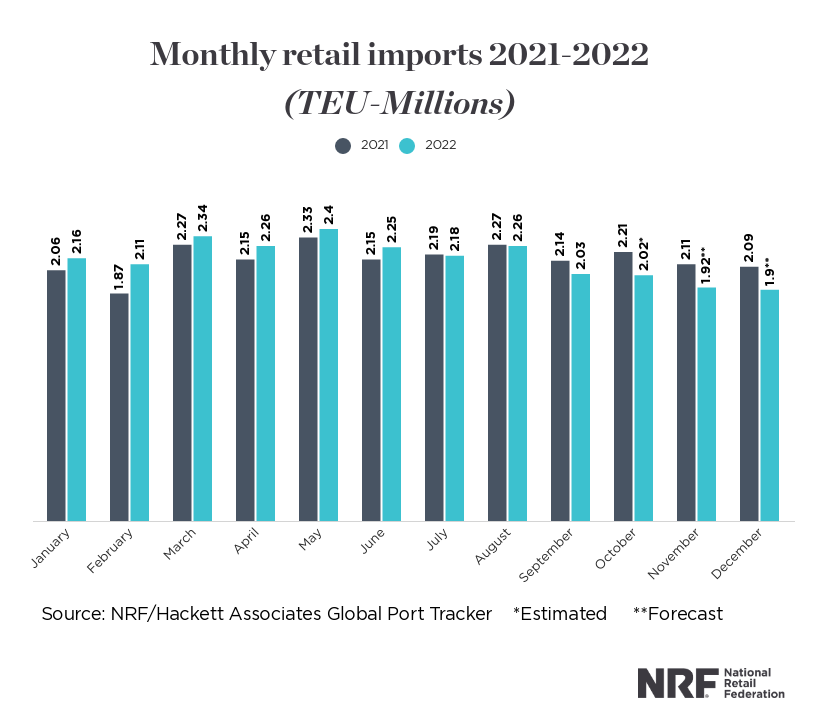 “This will depress the volume of imports, which has already declined in recent months,” Hackett Associates Founder Ben Hackett said. “Carriers have begun to pull services and are looking at laying up ships.”

US ports covered by the NRF/Hackett Associates Global Port Tracker handled a record 2.4m TEUs (20-foot equivalent units) in May, but volume has seen a mostly steady decline since then.

Ports processed 2.03m TEUs in September, the latest month for which final numbers are available, down 10.2% from August and down 4.9% from September 2021.

Meanwhile, the number of ships in the queue to anchor at the West Coast ports of Los Angeles and Long Beach has ticked higher this week after hitting a new low of one on 26 October, according to the Marine Exchange of Southern California (MESC).

MESC said there were 10 vessels backed up, with two being within 25 miles of the ports and the rest slow speed streaming outside of the Safety and Air Quality Area (SAQA).

The record high was on 9 January when there were 109 container ships waiting to offload.

According to an operation update from Hapag-Lloyd on 7 November, the backup at the Port of Savannah was at 32 vessels, unchanged from the shipper’s update on 1 November.

Port Houston had 10 container ships at anchor, unchanged from the previous week.

Port Houston officials said they will implement a container dwell fee beginning 1 December in an effort to maintain efficient operations.

The ports of LA/LB announced container dwell fees in October 2021 but have delayed implementation as the two ports have seen a combined decline of 69% in ageing cargo on the docks.

Both ports have delayed implementation until 18 November as they continue to monitor the situation.