“Specialty PVC is where we’re the clear leader with close to 60-70% of the market and our key focus is to maintain that dominance,” said Vijay Sankar, deputy chairman of Sanmar Group, in an interview with ICIS.

Key applications for specialty PVC paste in India include synthetic leather for apparel, footwear and automotive upholstery. It is also used to make vinyl gloves.

Demand for specialty PVC paste in India was around 143,000 tonnes/year in fiscal 2020 and is expected to grow at around 9.3%/year, according to Chemplast Sanmar in its latest earnings presentation in November 2022.

The company produces a significant amount of its feedstock ethylene dichloride (EDC) and vinyl chloride monomer (VCM) feedstock for this business in-house in India, it said.

PVC OUTLOOK
In suspension PVC, Chemplast Sanmar has 331,000 tonnes/year of capacity in Cuddalore after completing a 31,000 tonne/year debottlenecking in May 2022. It is the largest producer of suspension PVC in South India and #2 in India overall, according to the company.

India is a large deficit market for PVC and imports from China and the US have picked up since antidumping duties (ADDs) on product from these countries expired in March 2022. However, imports from China could fall as the economy opens up with the end of its zero-COVID policy. 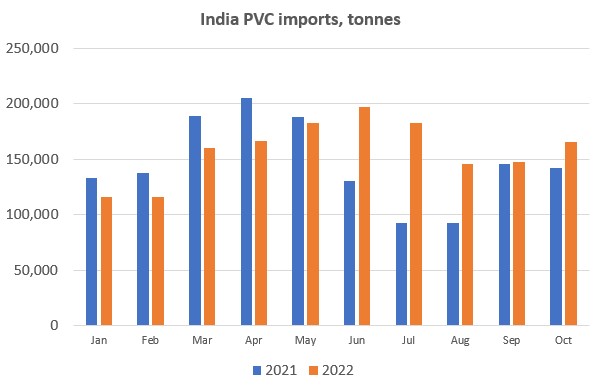 “We expect exports will decline from China. Long term, we are not bullish on carbide PVC which we believe will be phased out,” said Sankar.

Much of China’s PVC production is based on the coal-based carbide process.

“Given the current supply/demand dynamics, we think India would find it reasonable to import around 150-170,000 tonnes/month of PVC. But as demand grows, it will not be as easy to import extra volumes needed,” said Sankar, who added that India’s PVC deficit is almost 2m tonnes/year and likely to grow.

HIGH GROWTH RATES
In the next five years, he sees India PVC demand growing at 7.5-10%/year, driven by construction and irrigation projects to serve a rapidly growing population.

Per capita consumption in India is less than 2.5kg/person, which trails other southeast Asian countries such as Thailand and Malaysia at 4-10kg/person, so there is plenty of potential for growth. India is also expected to become the most highly populated country in the world later in 2023, surpassing China, he pointed out.

“The economy is doing well versus other countries. India has stable policies and a young population, so demographics are favourable as well. All this bodes well for demand,” said Sankar.

India PVC prices likely bottomed in 2022 and the inventory situation has improved, he said.

ICIS CFR (cost and freight) India prices have rebounded to about $935/tonne versus lows of $728/tonne in November, but are down from around $1,500/tonne a year ago.

While additional PVC capacity is expected to start up in the coming years, the deputy chairman doubts there will be overcapacity because of strong demand growth. Rather, greater local production could simply replace imports.

“Over time, we will not be such a big import market – it will be more balanced,” said Sankar.

“India is focused on boosting domestic production in many products, so PVC too will be more domestic-focused,” he added, referring to Prime Minister Narendra Modi’s Make In India programme.

Sustainability will also continue gaining momentum over time. Sankar points out that Chemplast Sanmar has been on the forefront in this respect, having published its first annual sustainability report 14 years ago and becoming the first chemical producer in India to achieve zero liquid discharge at all its plants back in 2009.