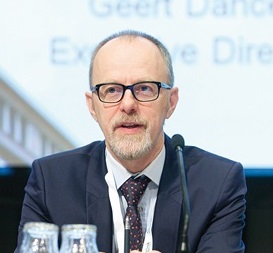 LONDON (ICIS)–The EU’s chemical regulator has asked chemical companies yet again to “proactively” engage with the substances registration process and updates of already registered chemicals before it “takes a decision” on those firms ignoring the Reach regulation requirements, according to the executive director at the European Chemicals Agency (ECHA).

In a gesture to small and medium enterprises (SMEs), Geert Dancet (pictured) added that, together with national trade groups, ECHA is exploring the possibility to “positively discriminate” against SMEs as the latest deadline for Reach registrations kicks in 2018.

Regulation establishes that chemical quantities between 1 and 100 tonnes will need to be registered, and many SMEs have claimed the costs of registrations will be too great to take in.

Geert Dancet also said he “hopes for the best” in the UK-EU negotiations for the country’s exit from the 28-country bloc in 2019 but added that ECHA was preparing for the “worst-case” scenario: the UK withdrawing from the single market, which is Reach’s jurisdiction as well.

“We noticed a problem with the quality of several dossiers filed. Many of them were obviously not in line with the requirements, so we have been asked to be more severe on the completeness checks. We have thus improved our automated controls but also we have introduced manual verification of dossiers when the system identifies potential inconsistencies,” said Dancet.

“For years we have relied only on IT for the completeness checks but since mid-2016 these manual checks are helping to see if companies are applying exceptions in providing the standard information: we check whether what they write makes sense.”

ECHA’s call for more collaboration is nothing new. In April, it asked chemical companies to provide more-detailed dossiers, while in June it reported that nearly 11% of the 800 EU-based chemical companies that use 13 substances of very high concern (SVHCs) failed to comply with the authorisation process set out by Reach.

Dancet’s own diatribes to companies are well-known within the European chemical industry. Invited to the EU’s trade group Cefic’s annual assembly in 2016, the ECHA chief asked them to “stop complaining” and get on with registrations, among other memorable gems.

As he warned them at the time, the Reach journey does not end with the initial registration, an idea he insisted on again.

“Dossiers were filed years ago and we found out that the vast majority of the older dossiers have not been updated. Dossiers are not only about complying when they are submitted, they also need to comply with regulation today – if there is new scientific information, if the volumes have changed and so on,” said Dancet.

“We have asked Cefic to consider that, taking voluntary action by sector groups. However, we also know that many companies will not keep their dossiers updated when asked to do things voluntarily. So it would be good for the Commission to better clarify the legal obligations for updating dossiers.”

Given ECHA’s intention to make registrations a continuous journey, the executive director said he is amused when companies “get extraordinarily surprised” when the regulator is unhappy with dossiers and ask companies to do more testing on substances or improve their exposure assessments, for instance.

Reach’s 2018 deadline for small quantities has been a headache for the industry as of late. Many SMEs fear that they may need to stop producing certain substances as they produce such small amounts that the registration process could not be cost effective.

Dancet said he was sympathetic for them but added that the final outcome for many of them may indeed be withdrawing from the market.

However, he spoke of potential “positive discrimination” against SMEs which could entail extending the deadlines for those struggling the most, although financial help was out of the question as per the EU’s state aid rules.

Financial help would not be something ECHA could provide, anyway, as per its own financial woes explained by Dancet in an interview on 21 September.

In February, both Cefic and ECHA said that EU member states were considering options to offer SMEs financial support to help them get on with their registrations for the 31 May 2018 deadline.

However, direct financial support has so far been non-existent. At most, according to Dancet, the European Investment Bank (EIB) has been granting counter guarantees to European banks who have lent to chemical SMEs to finance registration-related processes.

“It would be hard [if they had to withdraw from the market]. That’s why we are now discussing with industry representatives whether they would want to make exceptions for SMEs. The directors contact group is currently negotiating about ways of making exceptions for SMEs.”

The directors contract group is composed by ECHA, the Commission and industry associations representing both large firms and SMEs, Dancet explained.

“We are having those discussions. If we come up with a solution we would then want the industry to propagate that and make positive discrimination on SMEs.”

Dancet said he has again been invited to Cefic’s annual assembly, to be held in Vienna on 26-27 October. “I’ll be meeting with national associations so we can also explore what can be done in getting a wider support for discriminating in favour of SMEs so they can stay in business.”

ECHA’s director said he would like the UK’s exit from the EU to keep within the remit of Reach because there are other examples of non-EU countries who follow that regulation, like Norway, Iceland or Liechtenstein.

However, he said the regulator has been told to prepare for the worst-case scenario – the UK leaving the EU’s 500m-strong single market.

Planning for the worst, ECHA will soon launch a website to clarify to companies in the UK or those trading chemicals with the country what the implications of leaving Reach would be.

For instance, the site will explain whether a company can keep a registration already filed pre-Brexit, and whether that will be valid to trade with the EU post-Brexit, as well as the different aspects of the legal framework that could apply.

“We hope for the best because we see the importance of the UK as a country in the work we do, and one way or another I hope the UK can stay as part of the family and also contribute to our budget and our assessments, but we don’t know if that will be the outcome. What we are asked to do is to prepare for the worst-case scenario,” said Dancet.

“The negotiations are entirely done in Brussels [the EU’s capital] so basically for us it is as difficult to assess progress as it is for you, the journalists.”