China has tightened its targets for improving air pollution levels in the country under a new three-year plan, its environment minister was quoted as saying by state media.

The targets for the concentration of PM2.5 – tiny, toxic particles or droplets in the air which can lead to fatal diseases – will be stricter than the current plan that is due to end in 2020, the Minister of Environmental Protection Li Ganjie was quoted as saying by state-owned China Daily on the sidelines of the 13th National People’s Congress on 17 March.

Li did not elaborate on the details of the plan. He heads the newly approved Ministry of Ecological Environment, which was transformed from the former Ministry of Environmental Protection, it said. The new ministry will absorb duties held by other authorities that relate to river, marine and soil pollution as well as climate change, according to China Daily. 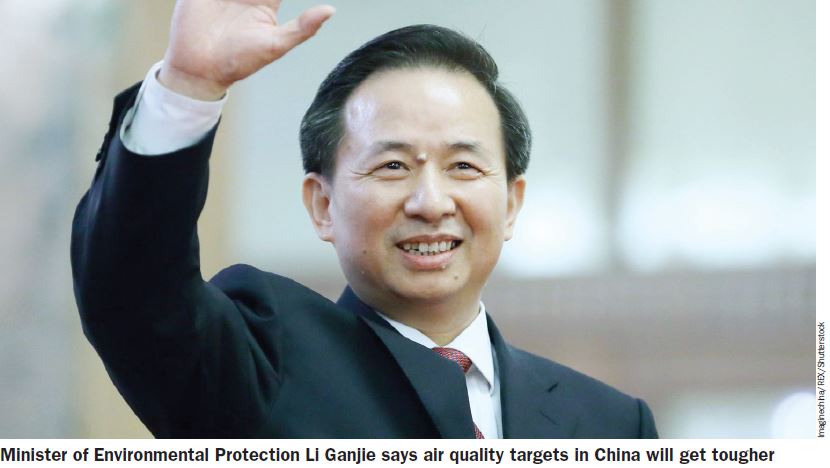 Moreover, the new ministry plans to set up a nationwide  inspection system, which will give responsibility for regular checks on polluting companies and factories to local authorities in addition to the central government, Li said. The central government launched  its first round of national environmental inspections in December 2015, according to China Daily.

In a separate report, state-run news agency Xinhua said about 18,000 people were disciplined or punished for environmental problems discovered in the  inspections. Four rounds of central environmental inspections have been launched since 2016, it said. About 2,100 local officials, including three at provincial level, were found  responsible during the follow-up examinations of those problems, Xinhua added.

China had set an official PM2.5 target of 35 micrograms, which is higher than the World Health Organization’s recommendation of no more than  10 micrograms. In October last year, China’s Ministry of Environmental Protection said the average PM2.5 reading across 28 northern cities stood at  61 micrograms.

Anhui province plans to permanently shut six hazardous chemical plants and relocate another 34 in accordance with a national campaign to shift chemical production away from populous cities. Four plants will be upgraded to produce non-toxic products, according to a document published on the Anhui provincial government’s website. The central government in September last year initiated a massive move to move all dangerous chemicals plants away from densely populated urban areas before 2025.

Provincial governments were asked to submit their proposals by the end of 2017. Most  provinces have mapped out their plans, but only a few, including Hebei and Sichuan, have published the list of companies that will be impacted by the initiative.

IMPACT ON STEEL AND TIO2

China’s environmental crackdown would lead to a decline in steel output, leading to a drop in iron-ore mining and a fall in production of a feedstock for titanium dioxide (TiO2), an analyst said on 19 March.

TiO2 would join a large number of chemicals whose production has been disrupted by the government’s move to cut pollution. One of the feedstocks used to produce TiO2 is ilmenite, a by-product of magnetite. Magnetite mining accounts for more than 90% of the ilmenite produced in China, said Hassan Ahmed, an analyst for Alembic Global Advisors.

For every 10-50 units of magnetitie mined, one unit of ilmenite is produced, he said. China relies on magnetite for the iron ore it used to make steel, he said in a research note.

If China reduces steel production and if ilmenite output also declines, this should put additional pressure on TiO2 prices. These already have been rising because of a dearth of new capacity, Ahmed said. This contrasts with the outlook for demand, which Alembic expects will be below previous trends.

Over 50% of demand for TiO2 comes from paints used in housing and construction, he said.

UAE’s Borouge to sell 10% of its shares via IPO; to list in Abu Dhabi