SINGAPORE (ICIS)–Price discussions in the southeast Asian linear low density polyethylene (LLDPE) import market are teetering on the brink of record lows due to recent decline in crude oil prices and as virus control measures in some regions hit end-user demand for PE resins.

Through the week so far, offers and deals for dutiable LLDPE cargoes were at $810-830/tonne CFR (cost & freight) SE (southeast) Asia, at the low end of the previous week’s ICIS-assessed range of $810-850/tonne CFR SE Asia.

Toward the end of the week, these levels were generating little interest from buyers, which preferred to sit on the sidelines and wait for offers for April shipments, which they anticipate to be sharply lower because of the recent decline in crude oil prices. 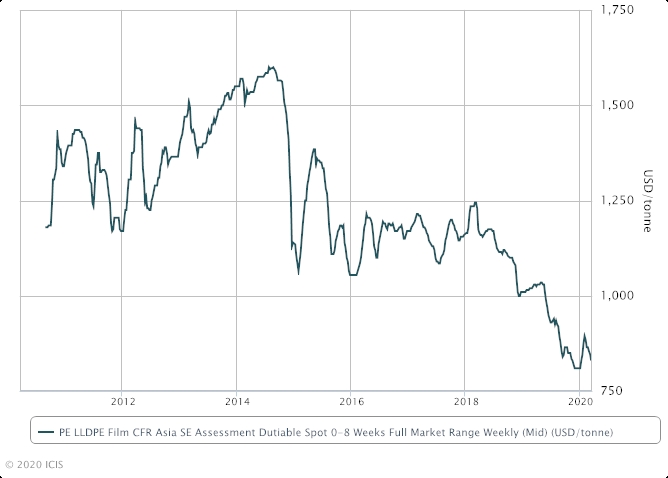 Crude prices rebounded overnight, supported by fresh stimulus packages from the US and EU, after plunging to their lowest levels in almost two decades on 18 March after Saudi Arabia signaled it will keep producing at a record 12.3m bbl/day “over the coming months”.

Meanwhile, naphtha prices are now languishing at a 17-year low on the back of frail downstream demand which has pulled down spot cargo premiums.

In the southeast Asian LLDPE market, buying indications during the week were at $750-800/tonne CFR SE Asia, market sources said.

A tipping point may be $800/tonne CFR SE Asia for many, with producers telling customers they would welcome any bids above that level while buyers indicated reluctance to start any discussions with any supplier above that price.

ICIS data showed that a decline in the LLDPE price below $800/tonne CFR SE Asia would put prices at their lowest levels since ICIS began tracking the data in August 2010.

“There is a mismatch between the producers’ and buyers’ expectations,” said one market source.

In countries like Malaysia, efforts to control the coronavirus outbreak has had a direct impact on downstream demand as converters there have been directed to reduce production to minimal levels and only to serve the domestic market as the country imposed a two-week movement control order from 18 March.

Additionally, recent gains in the US dollar against Asian currencies had also resulted in sharp gains in the relative price of US dollar imports and so, many southeast Asian buyers would rather purchase LLDPE product from the local market.

“Local prices are still okay,” said the same market source. “They may have dropped by $10-20/tonne but overall that’s not as bad as the import price declines.”

In Indonesia particularly – whose currency, the rupiah, has fallen to its worst levels against the US dollar since the late 1990s – buyers were staying well away from imports and procuring cargoes instead from local producers like Chandra Asri Petrochemicals.

“For Indonesian buyers now, buying any imports in US dollar terms will be very risky,” said another market source.

Photo: Fogging of city roads in Lhokseumawe, Indonesia to prevent the spread of the novel coronavirus – 19 March 2020 (By Maskur Has/SOPA Images/Shutterstock)