Nord Stream 2, German hub merger could leave Ukraine, CEE out in the cold

LONDON (ICIS)–Ukraine and the neighbouring central and eastern European countries are bracing themselves for the triple whammy of peak winter demand, the possible impact of rerouted Russian flows to Nord Stream 2 and the German hub merger, which could leave them out in the cold during the upcoming months.

An ICIS analysis has found the region could face a supply shortfall of anything between 15 to 65 billion cubic metres unless additional volumes are found and more transmission capacity is made available.

The most affected country would be Ukraine, which has been relying on 10-15bcm/year of imported gas from central-eastern Europe since it decided to stop direct Russian imports in 2015.

Neighbouring Poland, Romania, Hungary and Slovakia, which have historically depended directly or indirectly on the Ukrainian transit could also be affected if this route is discontinued.

It is unclear, as of now, what Russia’s Gazprom intentions are.

The company has a long-term ship-or-pay agreement with Ukraine’s Naftogaz for the transport of 40bcm/year to Europe until 2024.

It was due to inform Naftogaz of the volumes it expects to ship to Hungary, Poland and Slovakia for the year 2021-2022 by July 2021 but a source close to the Ukrainian incumbent told ICIS it had failed to do so.

A CEE trader said it was clear Ukraine would be the most affected by the new supply dynamics.

However, he said, it was doubtful whether the CEE region would become a premium market in the short-term as a result of the constraints.

“The market is pricing the arrival of Nord Stream 2 in Q4 ‘21 and a build-up period still in the fourth quarter and expects a plateau of flows in Q1’22. I do think it’s Russia’s intention to replace Ukrainian flows with Nord Stream 2,” he said. 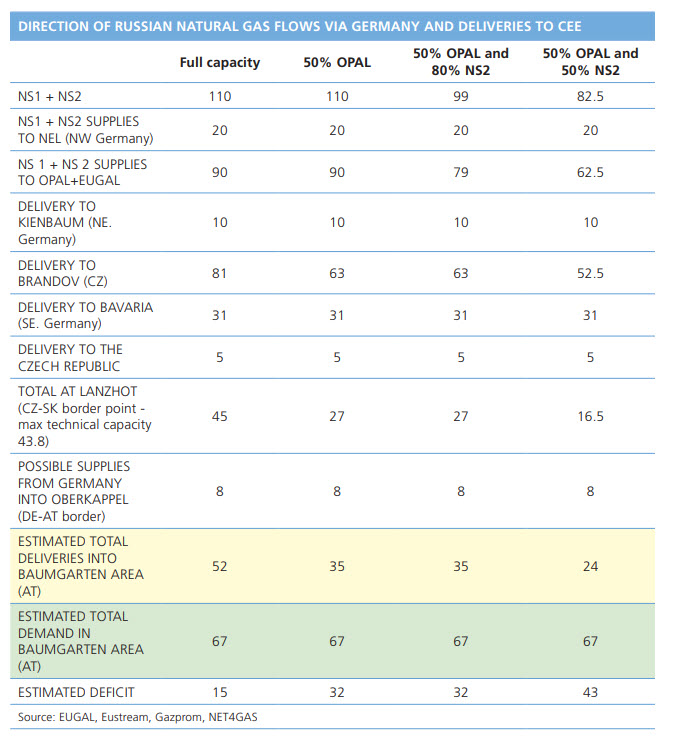 Speaking to ICIS, Aliona Osmolovska, Ukrainian government advisor, said Europe should ensure the Nord Stream 2 and OPAL pipelines were fully compliant with EU regulations, guaranteeing third party access. She added there was a risk Russia might interrupt physical transit flows via Ukraine to pressure the EU at a time when the Nord Stream 2 certification is under review.

Guaranteeing gas supply to Ukraine from the EU in the first quarter of 2022 would therefore minimise Russia’s incentives to follow this scenario, she said.

“Having instruments in place that would secure physical flow of gas via Ukraine this winter, would effectively avert the crisis and benefit all the countries at risk in the Baumgarten area, including Germany,” she pointed out.

She said the Ukrainian government has requested that the EC’s Joint Research Centre (JRC), which had carried out supply stress tests in 2014, run an urgent stress test to assess risks caused by the gas rerouting following the completion of Nord Stream 2, the merger of NCG and Gaspool hubs, low storage levels in the EU and record high gas prices.

“Such a test would put all the parties on the same page and help us develop effective crisis prevention measures,” she said.

ICIS has examined four scenarios based on a number of variables.

In this case, a total of 52bcm/year of gas is likely to reach the Austrian hub, the central delivery point for CEE, where baseload demand is calculated at around 67bcm/year, according to data published by Gazprom in its 2020 reports. In this case the deficit would be at 15bcm/year.

The second scenario assumes Nord Stream 1 and 2 are fully operational and the OPAL pipeline, operates at half capacity following a ruling by the Court of Justice of the EU.

In this case, 35bcm/year would be made available at Baumgarten, where demand would remain at 67bcm/year, bringing the deficit to 32bcm/year.

Once again, the deficit at Baumgarten would be at 32bcm/year.

Finally, assuming a scenario where Nord Stream 1 would be fully operational but Nord Stream 2 and OPAL would work at 50% or less, should Nord Stream 2 be subject to a CJEU ruling similar to OPAL’s, the total deliveries in the Baumgarten area would be 24bcm/year, bringing the regional deficit to 43bcm/year.

The independent variables of the four scenarios predict, in line with contractual obligations, that out of the total Russian gas delivered via Nord Stream 1 and 2, 20bcm/year are delivered to west Germany via the NEL line, 10bcm/year at Kienbaum in east Germany, 31bcm/year would be supplied to Bavaria in southeast Germany and 5bcm/year to the Czech Republic.

The scenarios also assume that some 8bcm/year could be delivered from Bavaria into Austria via the Oberkappel border point.

The deficit would be largely caused by capacity bottlenecks.

With the rerouting of Russian gas to Nord Stream 2, most of Russian supplies to Europe would go through Germany.

Countries which had been supplied via the Ukrainian route would have to import gas via Germany and redirected eastward to reach consumers in the Czech Republic, Slovakia, Hungary, Austria or even Romania.

However, even in a scenario where Russian gas would be flowing at full capacity via Nord Stream 1 and 2 as well as the OPAL and parallel EUGAL pipelines, there are still capacity bottlenecks at:

• Lanzhot on the Czech-Slovak border,

• Oberkappel on the German-Austrian border,

• Mosonmagyarovar on the Austrian-Hungarian border

• Csanadpalota on the Hungarian-Romanian border.

These interconnectors have been identified as congested border points by the Agency for the Cooperation of Energy Regulators (ACER) in a 2020 report.

Furthermore, there are also bottlenecks within the German system – for example at Bunder-Tief close to the Dutch border point, at Kienbaum in northeast Germany or at Uberackern in Bavaria – which might become evident with the merger of the two hubs.

NCG and GASPOOL are due to merge into one “Trading Hub Europe” from 1 October 2021, but this could lead to capacity constraints at entry points into the German grid due to congestion caused by insufficient infrastructure between the two hubs.

Germany’s 16 TSOs, which will be key stakeholders in the upcoming market merger, had to reduce firm entry capacity offerings from gas year 2021 onwards by 78%.

IMPACT ON UKRAINE AND CEE COUNTRIES

This means that even if CEE countries were to seek additional supplies in western Europe, these may not reach the region because of capacity constraints inside the German system.

Ukraine would be in a particularly difficult situation because with the loss of transit it would also be deprived of flows netted out from its transit to Hungary and Poland with which it has virtual interconnections. This means the country would be left with a single physical supply route from Slovakia.

However, if Slovakia does not have any additional volumes of gas to sell into Ukraine, the latter could face a shortfall of 10-15bcm/year out of a 30bcm/year demand.

This winter it may plug the deficit with the 19bcm/year held in storage but the lack of flexible supplies in the CEE region could pose a long-term problem for Ukraine, potentially prompting it to seek direct Russian gas imports.

Poland, which faces internal capacity constraints in the southeastern part of the country, will also be affected by the loss of the Ukrainian transit.

Hungary is expecting to receive 3.5billion cubic metres of gas from Serbia when a new interconnector is brought online on 1 October. This line will connect with the wider regional infrastructure facilitating the transport of Russian gas imported via Russia’s TurkStream corridor.

Another 1 bcm/year is expected to be supplied into Hungary via Austria, according to official Hungarian government statements. Even so, this would still be short of the estimated 8.6bcm/year Hungarian demand. Ukraine physically supplied 6.6bcm/year to Hungary in 2020, according to data by grid operator GTSO.

Finally, Romania has historically imported gas transited via Ukraine. The rerouting of volumes via TurkStream would leave it dependent on imports from Bulgaria or Hungary, although the border capacity with the latter is congested, as pointed out by ACER.

Furthermore, assuming aggregated regional demand would spike to 224mcm/day, which corresponds to the five-year historical average peak demand of the region, total CEE demand could rise to 82bcm/year. This means the regional deficit could spike to 65bcm/year in the Baumgarten area in a scenario where Nord Stream 2 and OPAL would work at below 80% capacity.

It is unlikely the region would see a consistent substantial demand rise throughout the year.

However, on days of spiking winter consumption, where the entire continent faces cold temperatures, CEE countries would have to compete for tight supplies with large industrial consumers in western Europe.

A bottleneck could appear in Bavaria, home to some of Europe’s largest industrial consumers such as car manufacturers BMV, Audi, MAN, technology conglomerate Siemens or defence company Krauss-Maffei Wegmann.

Even if there was some level of flexibility in the German system CEE consumers would have to compete against Bavarian industrial heavyweights for additional volumes.

Should Germany receive gas supplies needed to transit to central and eastern European markets, the issue of a lack of physical connections between the current NCG and GASPOOL market areas could create bottlenecks in gas flowing freely.

The amount of firm capacity on offer from 2021 onwards had been reduced by 78% at the PRISMA auctions, under instruction from Federal Network Agency, BNetzA, as building the necessary infrastructure to alleviate the issue was both costly and unfeasible in the time frame for the merger.

BNetzA instead decided to settle on the use of Market Based Instruments (MBIs) as part of an overbooking and buy-back mechanism, KAP+, to alleviate potential congestion issues.

KAP+ specified three market-based instruments: (MBIs), wheeling, third party network use and locational spreads, which would help to manage any congestion between the two hub areas.

Wheeling and third-party network use both involve rerouting flows to around a congested network point, through a cross-border interconnection point.

Locational spreads will involve the use of a standardised exchange product where gas is simultaneously bought and sold in different network zones, acting like virtual transport.

Should MBIs not be sufficiently available to tackle any congestion issues, the capacity buyback is the solution of last resort (Ultima Ratio).

Capacity buy-back essentially gives THE the right of use for firm, nominated entry capacity in the upstream congestion zone on the basis of a reduced capacity buyback merit order list.

This story is part of a series looking at the rerouting of Russian flows from Ukraine to Germany and the impact on CEE hubs.

US EPR adoption to drive up plastic recycling rates over time