Stay on top of market developments and changes within volatile olefins markets with ICIS pricing and market intelligence. 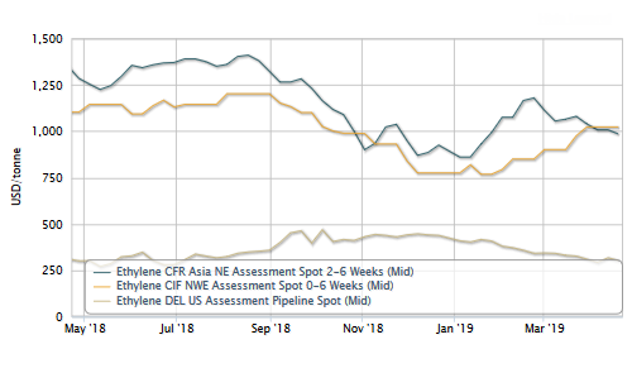 If you’re looking for a 360° perspective of global olefin markets, our short-to-long term solutions – from pricing data, news, market analysis, to supply and demand forecasts – power decision-making by bringing clarity through data and ensuring you are able to evaluate the olefins industry from every angle.

Whether you buy, sell, trade or analyse olefins, our short-to-long term solutions – from pricing data, news, market analysis, to supply and demand forecasts – power decision-making by bringing clarity through data and ensuring you are able to evaluate the olefins industry from every angle.

Weekly market outlook: Overview and outlook for the overall regional olefins market, including a brief commentary on the other regional markets

Regional coverage: Asia-Pacific, China, Europe and the US for ethylene, propylene and butadiene/C4s. Europe coverage for raffinate 1+2.

Due to Asia’s active ethylene and propylene trading, daily reports are available for our Asian coverage. 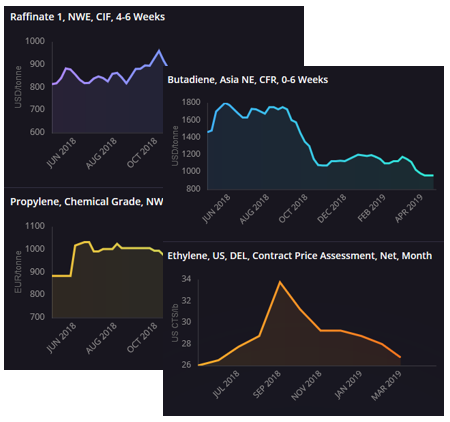 Olefins commodities we cover include:

Ensuring you gain a 360° view of the market, our pricing intelligence service is supplemented with analytical tools that take away the hassle of developing your own analysis. Quickly assess data such as: 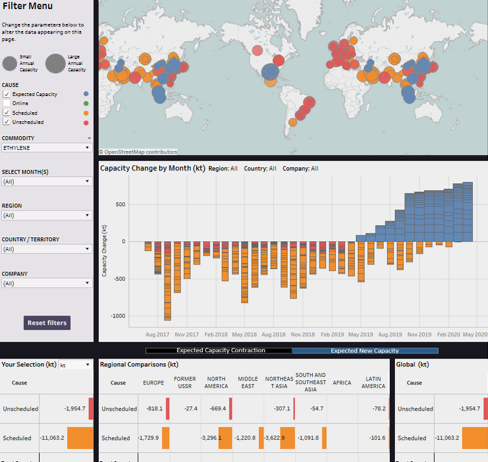 ICIS News brings you breaking chemical news as it happens – including market moves, analysis, data and more. The service is reliable, authoritative and always available when you need it most.

Stay on top of global olefins markets and other related commodities such as feedstock and downstream polypropylene (PP), polyethylene (PE) and more. 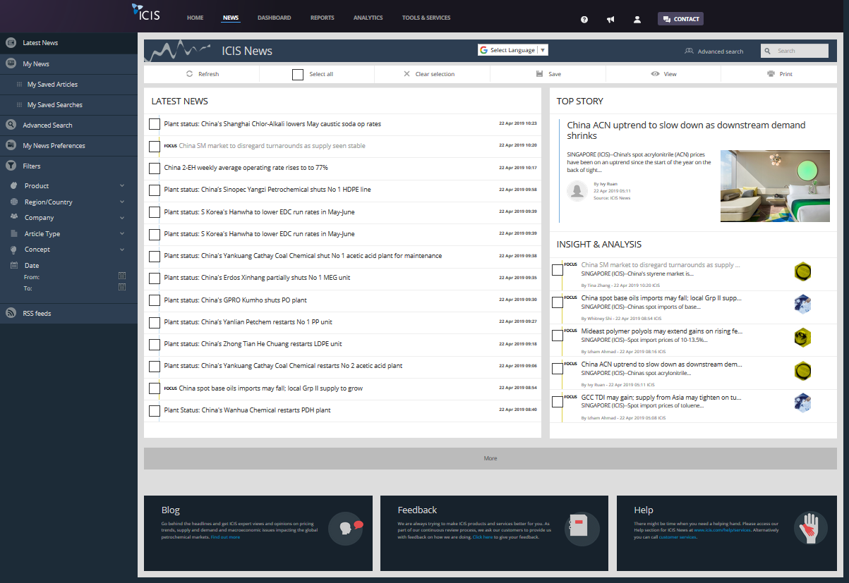 Our Pricing Methodology: ICIS price assessments are based on information gathered from a wide cross-section of the market, comprising consumers, producers, traders and distributors from more than 250 reporters worldwide. Confirmed deals, verified by both buyer and seller, provide the foundation of our price assessments.Interested to learn more about our methodology and how we derive our prices? Click on any of the links – butadiene C4s, ethylene, propylene, raffinate 1+2

Olefins, also called alkenes, are unsaturated organic compounds that contain at least one carbon-to-carbon double bond. They can be used in many reactions which occur by opening up the double bond.

Ethylene is the largest volume olefin used in the manufacture of polymers such as polyethylene (PE), polyester, polyvinyl chloride (PVC) and polystyrene (PS). The main intermediate chemicals produced from ethylene include ethylene oxide and ethylene glycol, ethylene dichloride (EDC) and vinyl chloride monomer (VCM), ethylbenzene and styrene, vinyl acetate monomer (VAM), alpha olefins and industrial ethanol. These products are used in a wide variety of industrial and consumer markets such as the packaging, transportation, electronic, textile and construction industries.

Propylene consumption is dominated by polypropylene (PP), which accounts for 60% of global consumption. Injection moulding is the largest PP market but it can also be made into fibres, film and sheet and extruded into pipe and conduit. Other important derivatives of propylene are acrylonitrile (ACN), oxo-alcohols, propylene oxide, cumene and acrylic acid. Propylene has been the fastest growing of the three main olefins, mainly due to the strong demand for PP.

BD is a versatile raw material used in the production of a wide variety of synthetic rubbers/elastomers and polymer resins as well as a few chemical intermediates. The largest uses for BD are the production of styrene butadiene rubber (SBR) and polybutadiene rubber (PBR), which are used mainly in tyres and other automotive products. BD is one of the components used in the manufacture of acrylonitrile-butadiene-styrene (ABS), styrene-butadiene (SB) copolymer latex, styrene-butadiene block copolymers and nitrile rubbers.

Olefins are manufactured primarily by the steam cracking of petroleum-based products such as naphtha, gasoil, ethane, propane and butane. Propylene can also be sourced from fluid catalytic crackers in refineries and by on-purpose technologies such as propane dehydrogenation and metathesis. Methanol-based processes to make ethylene and propylene are being developed.

In this week's podcast, after a stellar first half, global chemical markets may now go into decline, driven by destocking and faltering downstream demand. An uncertain paraxylene (PX) market in Asia...

NEW YORK (ICIS)--US-based Dow expects an extended period of growth with the global economic recovery still in the early stages, its chief financial officer said on Thursday. “We continue to see...

LONDON (ICIS)--A heavy maintenance period is ongoing for propylene in Europe, but spot has occasionally traded below contract for the first time in six months. So how will this impact on the tight...