The world of petrochemicals has been turned upside down. Never has there been a more exciting time in the area of petrochemical technology development. The US feedstock slate is becoming lighter and more competitive as a result of shale gas developments. At the same time, the Middle Eastern feedstock slate is becoming heavier and heavier, as ethane supplies become constrained and the region seeks to develop downstream industries for job creation, as described in the March 5 cover story of ICIS Chemical Business.

As another article in this week’s issue shows, chemicals from renewables – “green chemicals” – are gaining commercial traction after many years of research and development. And finally, the coal-to-chemicals process is showing huge growth in China.

China has the world’s third-largest proven coal reserves, holding 13% of the global total, ranking behind the US and Russia. However, China ranks first in the world with respect to both production and use of coal, consuming about 48% of global demand. Most of this consumption is for power production, but perhaps the fastest-growing sector is the conversion of coal to a wide range of chemicals.

Coal as a feedstock for chemical production is not a new idea. Coal tar was used for aromatics and specialty chemicals production, primarily for the dye industry, in the late 19th and early 20th centuries. From the beginning of the 20th century and many subsequent decades, coal was converted to acetylene via calcium carbide, ushering in a new era in chemicals production. This allowed large-scale production of many chemicals that we now think of as petrochemicals, including vinyl chloride monomer (VCM), acrylic acid (AA), acrylonitrile (ACN) and 1,4-butanediol (BDO). However, most of this technology was phased out, as the industry learned to make these same chemicals more economically from ethylene and propylene.

In China over the last 15 years, this “old” chemistry has been given new life in light of changing economics. As oil prices have steadily increased, China has recognized an opportunity to convert its cheap and plentiful coal supplies to chemicals. Most notably, China has not just dusted off the old techniques, but has also created completely new technologies for converting coal to chemicals. And it is not just China innovating. Western companies, such as US group Celanese and France’s Total, are also developing new processes.

At present, there are four different pathways from coal being commercially exploited in China:

Owing to the tremendous amount of steel production in China, the country has a huge need to convert coal to coke. Coke is produced by heating coal in ovens to vaporize any volatiles in the coal. One of the streams from coke ovens is coke oven light oil. This oil mainly comprises benzene, toluene and xylene (BTX), with benzene being the predominant aromatic. Although steel-production technology has evolved to require less and less coke, China produces a huge amount of this by-product, and Nexant estimates that about 27% of all China’s benzene comes from this source (see pie chart). Over the last decade, benzene capacity from this source has grown by six times. By contrast, on a global basis, coke oven light oil contributes only about 4-5% of the world’s benzene supply.

COAL TO CHEMICALS VIA ACETYLENE

The classical commercial route to acetylene involves the reduction of lime by carbon (in the form of coke) in an electric furnace to give calcium carbide. The calcium carbide is then hydrolyzed to produce acetylene. Before large-scale commercialization of steam cracking technology for olefins production, acetylene was the key feedstock for making many chemicals, such as VCM, BDO, vinyl acetate monomer (VAM) and AA. 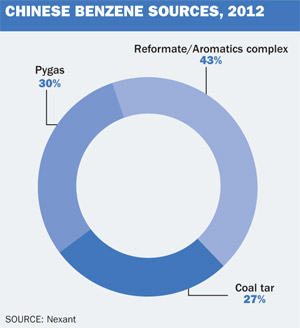 With the exception of BDO, the acetylene-based routes were later largely abandoned. However, in the early 1990s, this route was revisited in China and exploded in growth starting from around 2000 (see bar chart). Nexant now estimates that over 85% of all China’s VCM capacity is via coal-derived acetylene.

Coal-based VCM is created through the vapor-phase reaction of acetylene with anhydrous hydrogen chloride over a mercury-based catalyst. While this method is relatively simple and produces high yields – allowing straightforward separations and lower capital and operating expenses when compared to conventional oxychlorination VCM technology – the need to use a mercury-based catalyst is cause for concern from a health and safety perspective.

Converting methanol to olefins (MTO) was first undertaken by Mobil (now part of US energy group ExxonMobil) in the mid-1980s. Mobil developed a process called methanol to gasoline (MTG), and built the first (and only) plant of its kind in New Zealand. During its operation, it was observed that an amount of ethylene and propylene was produced under certain operating conditions. This observation lay dormant for another 10 years until UOP, part of US engineering group Honeywell, built a pilot plant in collaboration with Norway’s Norsk Hydro for intentionally converting methanol to ethylene and propylene.

Soon after, Germany’s Lurgi developed a version of this technology, but its process was intended to make propylene only (methanol to propylene, MTP). More recently, the Dalian Institute of Chemical Physics (DICP) has also developed MTO technology. The first commercial CTO plant was started up by China’s Shenhua Coal to Liquid and Chemical at the end of 2010, using DICP technology.

At least 10 additional CTO plants are projected to come on stream in China by 2016. If these plants all do come to fruition, CTO will provide almost 20% of China’s ethylene capacity and 17% of China’s propylene capacity.

COAL TO MEG AND ETHANOLN

one of the technologies discussed above were invented in China, but the country is almost exclusively exploiting these coal-based processes. However, China did invent a new technology for converting coal to MEG. The new process (developed by the Fujian Institute of Research on the Structure of Matter in partnership with Danyang Chemical Technology and Shanghai Jinmei Chemical Technology) is a complete departure from conventional ethylene-based oxidation and hydrolysis to MEG techniques.

The new coal-based technology involves initial preparation of dimethyl oxalate via oxidation of carbon monoxide (derived from the gasification of coal) by reaction with methyl nitrite, followed by hydrogenolysis of the dimethyl oxalate to give MEG. In the last step, methanol is liberated and recycled to make additional methyl nitrite through the reaction of nitric oxide and oxygen. As a result, the only feedstocks consumed are synthesis gas and oxygen. 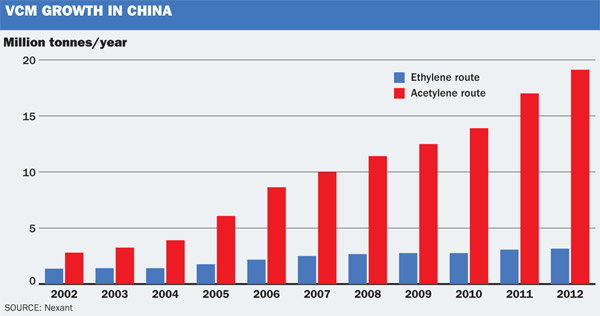 The first commercial plant, with a capacity of 200,000 tonnes/year, was started up in China in 2009 by Tongliao Jinmei. Five other plants using this technology are slated to come on stream in China by 2014, which would bring total capacity of MEG not made from ethylene to over 1m tonnes/year.

Celanese has recently announced its intention to commercialize a new process technology that will produce ethanol from coal. Although Celanese has not revealed the exact nature of the new approach, the company has indicated it would leverage its experience in acetyls technology.

While the four approaches described earlier differ, they all have one thing in common: a reliance on the availability of cheap coal. To take advantage of this resource, China’s chemical industry has both leveraged historical processes and invented brand new ones. Either way, China is inventing or reinventing its future in the chemicals business.

Jeffrey S. Plotkin is vice president, chemicals and technology, at Nexant and can be reached at jplotkin@nexant.com. The information in this article was developed by Nexant’s PPE and PERP programs.