SINGAPORE (ICIS)–Asia’s purified terephthalic acid (PTA) industry will be facing a tougher year in 2014, with expected lower operating rates and deteriorating margins, because new plants are due to come on stream this year, industry sources said.

The capacity of the new plants adds up to a total of over 16m tonnes/year, or 30% of the existing capacity in Asia, the sources added.

Asia’s PTA capacity has reached 55.7m tonne/year by the end of 2013, up by only 3% from the previous year. This was much lower than the expected 12% increase because poor market conditions have deterred project construction progress, the source said.

“I believe a certain portion of the impending start-ups in 2014 will also be delayed to 2015,” a major regional trader said.

Taking out three projects which are planned to start up in end-2014, there remain seven other projects, with a combined capacity of around 12m tonnes/year, or an increase of 22% from the existing capacity, the trader added.

China’s Xianglu Petrochemical has postponed the start-up of its new 4.5m tonne/year PTA unit at Zhangzhou in Fujian province from December 2013 because of slower arrival of facility parts, a company source said in mid-December.

The source said that the company has no clear timeline for the start-up so far given the poor market conditions, but most market sources said the start-up schedule is likely to be within the first quarter of 2014.

While the debottleneck project is to be completed in January 2014, the two Chinese projects are scheduled to be started up after the Chinese Lunar New Year holiday in end-January.

This will be followed by India Reliance’s new 1.1m tonne/year Dahej No 1 PTA plant in the second quarter.

It will be the first new PTA plant in the past three years in Asian region outside of China, except those debottlenecked and rebuilt plants, after the start-up of India’s Mitsubishi Chemical’s 800,000 tonne/year Haldia plant in 2010, an international trader said.

“The new plant in India will help relieve the tightness of PTA supply in India’s domestic market,” the trader said.

He said there will be three new downstream polyethylene terephthalate (PET) plants, with a combined capacity of 856,000 tonnes/year, expected to start up in the first quarter of 2014 in India, which is prior to the start-up of the new PTA unit.

“Asia’s PTA plants are to run at lower rates or more units will be kept idle in 2014 to balance the expected annual demand growth rate of 6-7%,” a major Asian PTA producer said.

The average operating rate of Asia’s PTA capacities were maintained at 76% of capacity in 2013 because supply and demand growth matches each other, according to ICIS data.

Asia’s PTA demand from downstream polyester industry reached 42m tonnes/year in 2013, up by 4% from the previous year, according to ICIS data.

Idle PTA capacity could reach 15m-20m tonnes/year in a certain period of 2014, one third to one fourth of Asia’s total capacity, a major regional source estimated.

“We are not able to afford further erosion of PTA margins, we would rather shut plants to minimise losses,” the same regional producer added.

A minimum PX-PTA spread of $110-130/tonne was deemed as a must to break even for most Asian PTA producers.

“No one knows how to survive in PTA industry in 2014, we will keep everything, including production, sales, prices and purchases flexible, depending on market conditions,” a second regional producer said.

Flexibility in different business functions would mean a lot of uncertainties as in plant operating rates, sales volumes, target customers, pricing methodology and purchasing strategies, the producer explained, and added that this is the only way to survive.

This was echoed by a few other Asian PTA producers.

Nevertheless, some Chinese PTA producers, including China’s Yisheng Petrochemical – the world’s largest PTA producer, are targeting higher output for the new year as they believe they have their competitive advantages against most of the other Asian PTA producers in terms of unit cost, logistics and market coverage.

“They might be able to expand their market shares in the Chinese domestic market, but will take time to penetrate into non-China market,” a major regional trader said.

Increasing self-sufficiency in both China and India, as well as higher netbacks in domestic sales will continue to hamper regional trade of PTA in 2014, the trader explained.

China’s PTA import volume was estimated at around 2.7m tonnes in 2013, a significant fall of 49% from 2012, according to China’s customs data.

The import volumes are expected to shrink further to 1.8m-2.3m tonnes in 2014 with a lot more new capacities coming up in the country, a third PTA producer said.

India, the second largest PTA consumption hub in Asia, is likely to reverse its short supply of PTA in 2014 by boosting its domestic PTA capacity by 56% during the year, the producer noted.

The only outlets for Asia’s PTA will be the Middle East region, including Turkey and Egypt, the producer added, because of new PET capacities coming on line in the two countries.

The new Middle Eastern PET makers are prompted to seek additional PTA supply, mostly from Asian region because of the deficit of PTA supply.

Middle East imported around half a million tonne of PTA in 2012, and the import volumes are expected to double in 2014. Import figures for 2013 were not immediately available.

South Korean PTA producers would benefit from PET expansions particularly in Turkey and Europe because of free trade agreement.

PTA imports from South Korea to Turkey started to enjoy zero import duties since 1 May 2013, and from July 2014 onwards South Korean PTA will be exempted from import duties to Europe, industry sources said. 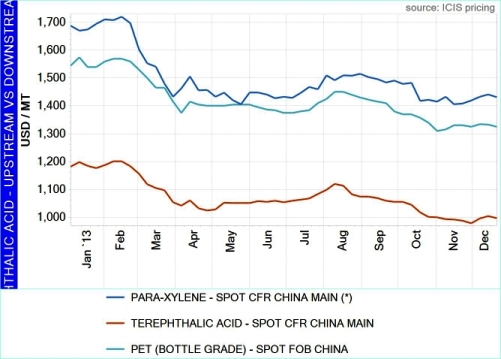