Focus story by Will Beacham 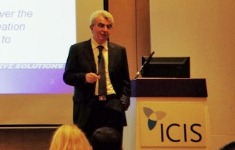 That was the message delegates heard at the second ICIS PET conference. In a lively presentation, Francesco Zanchi, CEO of business services group GSI Global Service International revealed some startling figures which demonstrate the gravity of the situation.

The main problem is China where a large proportion (3.5m tonnes) of the oversupply exists for 2014. Local demand there is 4.2m-4.5m tonnes with capacity of around 8m tonnes. He described the astonishing spate of capacity additions in China as a “revolution in 10 years.”

He forecasts a surge in Chinese exports from 1.85m tonnes in 2013 to 2.2m-2.3m tonnes this year. Chinese PET facilities will achieve operating rates of only around 65% this year.

“China is pushing the world into an unsustainable overcapacity crisis,” he said.

The situation in Europe, he said, is also deteriorating. The region has traditionally been a net importer of PET because capacity lagged demand. That is set to change this year as two new projects are scheduled to come onstream: Lotte’s 200,000 tonne/year plant in the UK and Indian group JBF Industries’ 440,000 tonne/year facility in Belgium.

These additions will be partially offset by closures at La Seda de Barcelona in Italy (180,000 tonne/year) and Indorama at Workington (160,000 tonne/year) which a delegate confirmed has now shut down.

Other new PET projects which have been delayed or cancelled include Indorama’s 230,000 tonne/year Poland project and a La Seda de Barcelona project in Italy (150,000 tonnes/year).

That, said Zanchi, still leaves around 300,000 tonnes/year of new capacity in Europe. But that’s not the end of the story. Players in Egypt and Turkey are also adding a total of 900,000 tonnes of capacity, and much of that will be targeted at Europe.

In addition, a new free trade agreement (FTA) means tariff barriers are being lowered to zero for South Korea, allowing it to export around 300,000 tonnes/year of PET towards Europe.

Turkey, Thailand, Egypt and Indonesia all have 0% duty arrangements, meaning a total of 2.4m tonnes of PET capacity will be targeted on Europe. Operating rates in Europe are likely to plummet from over 80% in 2013 to around 60-65% by 2015/16.

“I don’t create panic, I just give you the numbers,” said Zanchi.

After all this depressing news, Zanchi sought to reassure the audience that there could be some positive developments for Europe’s PET sector, both consumers and producers.

The FTA with South Korea should cut the price of both PET and feedstock purified terephthalic acid (PTA), boosting the region’s competitive position. “I believe more competitive European PET prices will stimulate demand,” he said.

He said around 17m tonnes of new PTA capacity is forecast to be added in China from 2014 to 2017, leading to “terrible” margins,  low operating rates and periodic plant shutdowns of even the largest plants.