LONDON (ICIS)–While the €300/tonne rise on the April styrene barge contract is driving similar increases in the European polystyrene (PS) market this month, there is some resistance from buyers who are anticipating a downward correction in May, sources said on Thursday.

PS producers have been targeting increases for April volumes of €300-320/tonne in line with higher raw material costs.

“The producers are taking a very strong line,” said one European PS consumer earlier this month. “The fact that they have already improved margins dramatically over the past few months seems not to matter as they are again pushing for above SM price increases and a ‘take it or leave it’ approach seem to be prevailing.”

However, other players noted that PS buyers are rallying against the higher numbers being touted in the market.

“A big majority of customers are showing fierce resistance at these levels,” said one trader. “Not only because of frustration about high prices, but simply because they are deciding to run down their apparently still big enough stocks, which they have managed to build up thanks to purchases during the last two months.”

With feedstock styrene costs on a steady incline since mid-February (see graph below), there has been an element of pre-buying among derivative players trying to secure material ahead of monthly price hikes.

The trader added: “There are those that need material, but claim that they can apparently still get cheaper material elsewhere. Some customers told us that producers informed them that prices next month will come down.”

However, the sharp backwardation seen in the European styrene market has started to ease as April has unfolded. While offers for prompt volumes have still been heard above the $1,400/tonne FOB (free on board) mark this week, a range for any-April delivery was seen midweek at $1,330-1,380/tonne.

Meanwhile, May pricing has gradually crept upward, with bids and offers for the forward month this morning seen at $1,370-1,410/tonne FOB.

Asian styrene numbers have moved higher this week, with CFR (cost and freight) China pricing edging above the $1,400/tonne mark for May delivery earlier on Thursday. There are several regional turnarounds on styrene, which has been tightening availability in the market.

While there is a risk of Asian buyers failing to perform, several European sources thought current pricing made the Asian market more attractive for exporters in the US Gulf region.

“Most of what I was seeing in the US is now going to Asia,” said one European styrene trader. “There is more liquidity, while the ARA region is still thin.”

European benzene prices have also started to rally this week, with May trading as high as $855/tonne CIF (cost, insurance & freight) ARA (Amsterdam-Rotterdam-Antwerp) on Wednesday April 15. With the April monthly settlement agreed at $730/tonne, current spot levels would support another sizable increase next month.

There have been more exports out of the ARA region this month, helping to balance out the length seen on European benzene since the start of the year. Combined with several planned and unplanned cracker outages, this has seen benzene prices edge up further, with both April and May spot numbers hovering around the $900/tonne level this morning.

The cracker outages have also seen some prolonged tightness in the European ethylene market, which is likely to see further contract price increases by next month.

So there is now a sense that the sharp downward correction that many had anticipated on the styrene barge settlement could also be dampened by stronger forward month pricing on raw materials.

“The euro/US dollar exchange rate further increases the euro value of benzene,” said one styrene consumer. “The likelihood of a rollover is getting stronger.” 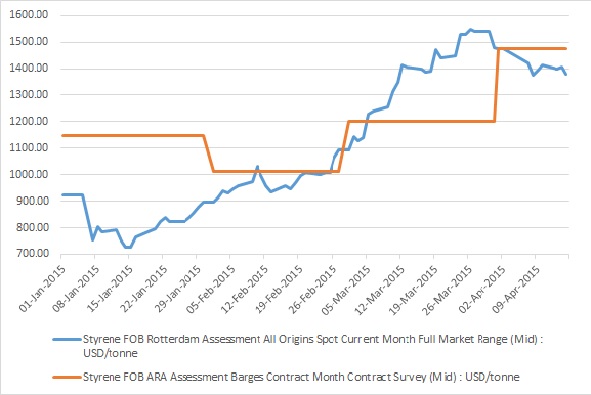