Commentary: China next in shale gas?

How important will shale oil and gas become in the energy mix and what might the impact be in chemicals?

The rush to invest in US gas-based chemicals gives a flavour of the potential opportunity, with billions of dollars flowing into new plants alongside midstream infrastructure.

Much has been written about the specific set of circumstances that have enabled such rapid development and how those are unlikely to be repeated elsewhere. But, over time, shale oil and gas will account for a greater proportion of the diversifying global energy mix. 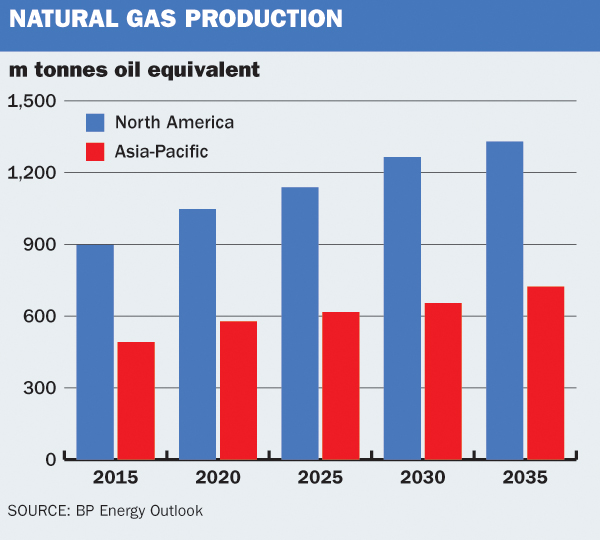 Energy giant BP suggests China will become a major producer of shale oil and gas over the next 20 years. It predicts that overall, shale gas will more than double its share of the global gas market to account for about 24% of the total in a base case scenario.

“We have been repeatedly surprised by the strength of US tight oil and shale gas,” BP said in its 2016 Energy Outlook. “Technological innovation and productivity gains have unlocked vast resources of tight oil and shale gas, causing us to revise the outlook for US production successively higher.” But it warns past surprises in the strength of the shale revolution introduce considerable uncertainty, although future surprises could also be on the upside.

Now US shale gas is expected to grow at 4%/year over the period of the outlook. US shale gas could account for about 75% of total US gas production in 2035 and some 20% of global gas output.

In a “stronger shale” scenario, characterised by greater reserves and greater production efficiency, shale gas could account for more than one-third of global gas supplies. BP sees global tight oil output increase to twice its level in the base case under this scenario, while the share of total liquids output rises to 18%.

The impact of that sort of development potential cannot be ignored. Think of the way China has moved to capitalise on its coal resources for chemicals, and the impact of coal-to-olefins (CTO) and coal-to-propylene plants on downstream olefins-reliant markets alongside the impact on methanol.

The loser in the latest of BP’s various energy scenarios, in its Energy Review 2035, has to be coal, largely because of its environmental impact – although increased shale oil and gas production would also crowd out conventional resources and renewables.

In China’s case, might we see over the next two decades a rapid shift back to more conventional petrochemical production technology, with gas cracking and natural gas processing coming into the mix? That, of course, depends on how “wet” (NGL-rich) or “dry” (mostly methane) the shale gas might be in certain parts of China.

The striking projection from BP’s latest energy outlook is for shale gas with base case of 5.6%/year growth between 2014 and 2035, much higher than that for the growth of total gas production.

“As with the past 10 years, the growth of shale gas supply is dominated by North American production, which accounts for around two-thirds of the increase in global shale gas supplies,” BP said. “But over the Outlook period, we expect shale gas to expand outside of North America, most notably in [the] Asia-Pacific [region] and particularly in China, where shale gas production reaches 13 bcf/d [billion cubic feet per day] by 2035.”

That would make China the second largest shale gas producer after the US.

China is set on a path to account for 25% of global energy consumption at the end of the forecast period. Its oil import dependence is expected to climb significantly and overtake that of the US, at its peak in 2005, although its own energy production is forecast to rise by 40%. The natural gas share of total energy grows while the coal proportion declines. Oil’s share remains unchanged.