In recent years, Africa has been attracting growing interest from producers and traders of plastic resins and products located all around the world.

Optimists believe that Africa will be one of the key regions in the future development of the global polymers market. Undoubtedly, the opportunity is huge, and we only need to compare the per-capita polyolefin consumption in the region with that around the rest of the world to realise it. According to the latest estimates from ICIS Analytics & Consulting, the average global per capita consumption of polyethylene (PE) and polypropylene (PP) combined in 2015 was 21.2kg, and it will reach 25.0kg by the end of the decade, compared with averages for Africa of just 4.5kg and 5.5kg for the same timescale.

Africa is a complex market, and highly fragmented. Strong differentiation exists between northern African and sub-Saharan markets, and between these and South Africa – which is by far the country with the highest market maturity. This disparity reflects the historical, economic and political differences of the various areas and countries, as well as simply the implications of geography such as the proximity to resources, the trading opportunities and the relative development of downstream sectors.

Over the last few years, African polymer consumption has been fluctuating, depending on levels of political turmoil and faltering economic trends. Overall, the PE and PP consumption growth rate during 2010-2015 has averaged 5.5%/year, significantly above the global average of 3.8%/year over the same period. Nonetheless, by 2015, Africa still accounted for just 3.7% of total world PE demand and 2.7% of PP demand, with 3.3m tonnes and 1.8m tonnes respectively converted by plastic processors during the year, according to estimates by ICIS Consulting. 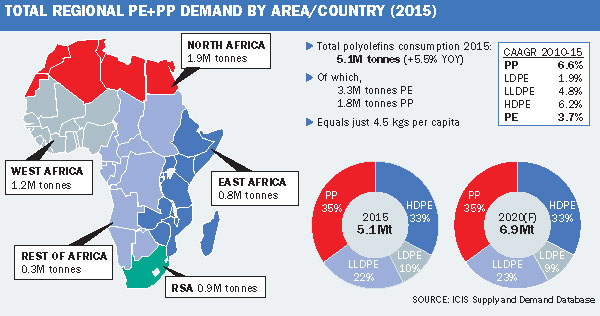 Sizeable markets in northern Africa include Egypt, Morocco, Algeria and Tunisia. Egypt is the largest single market for PP in Africa, with about 360,000 tonnes of material consumed in 2015, including homopolymer and copolymer grades. The country has a high potential for demand growth, which in the short term will be supported by increased domestic availability following the recent restart by Oriental Petrochemical (OPC) of the 180,000 tonne/year PP unit at Ain Sokhna, in the Suez Governorate, which had been off line for almost two years.

The development of the PE and PP markets in sub-Saharan Africa has been patchy, and, in most countries, it is still in the early stage of development. Long-term prospects are positive for western economies like Nigeria, the Ivory Coast and Ghana, and in eastern Africa. Although there is still a need for an economic drive to develop the local processing industry, macro trends support the view of a robust increase in commodity plastics consumption.

South Africa has a more developed plastics market, with over 1,800 plastic converters operating domestically, according to the Plastic SA association. Market sentiment there has been weakening in recent years, especially due to credit issues and a weak currency that have undermined the domestic industry. But the market is still offering positive volume growth overall.

The plastics processing industry in key markets like Nigeria and Kenya will replace some imports, especially of finished goods. But competition will intensify for polymer producers, with larger PP import volumes envisaged from the East, and cheap PE coming from North America to north and west Africa in particular.

As to local investments, Egypt will emerge as a key player when projects under development are up and running. These will include a 400,000 tonne/year HDPE/LLDPE swing capacity from the Egyptian Ethylene and Derivatives Company (ETHYDCO), which is due on stream this year, and a second PP unit from OPC due in 2018, that will be almost twice the size of the existing unit.

Saudi Arabia and to a lesser extent the UAE have traditionally been large-scale suppliers of PE and PP to Africa, and will compete with the Egyptians in northern Africa. Further to supporting the domestic market, Egypt will have to focus its new capability on exporting to its natural markets around the Mediterranean, including to Europe. South Africa will also continue to sell material, especially PP, to many markets in sub-Saharan Africa. But in the long term, trading competition will rise across Africa, once the continent becomes an easier place to do business.