HOUSTON (ICIS)–The US styrene market is entering 2017 with tight supply and high prices, amid unexpected shutdowns in late 2016 and upcoming planned turnarounds in the first quarter.

US styrene spot prices began to firm on 13 October, and by early December prices hit the highest level since August 2015. 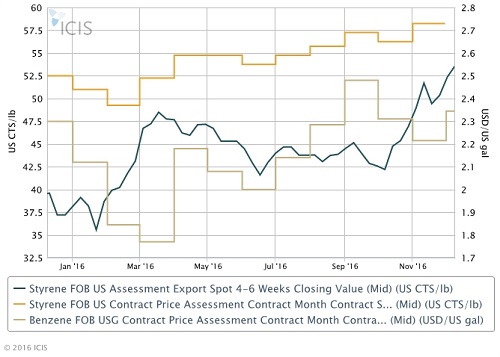 Supply quickly tightened in the US market following a fire on 13 October at Westlake Chemical’s 259,000 tonne/year plant in Lake Charles, Louisiana. The plant was back to full operations by mid-November.

About one week after the fire, INEOS Styrolution took its 450,000 tonne/year Texas City, Texas, styrene plant down after it encountered mechanical issues. The plant was back up in the first-half of December.

One producer, commenting on the volatility in the styrene market, said that the concern at this point is the fact that there are several styrene plant turnarounds coming up in the first quarter. The producer wondered how much the recent outages would affect the building of inventory before the first-quarter turnarounds.

At this time, up to four separate turnarounds could be conducted in the first quarter in the US Gulf, but some of those turnarounds are unconfirmed by the producers.

As a result of the upcoming maintenance plans, buyers may decide to hold more inventory at the end of 2016 than normal. The turnarounds will take place at the very time when US exports are typically very strong.

In addition to the supply tightness, the Asian market has been pulling heavily on supply in an attempt to build inventories. China, especially, is low on inventory, and continues to be a primary target for US styrene exports. One source said that China’s inventories are at half of their normal levels. 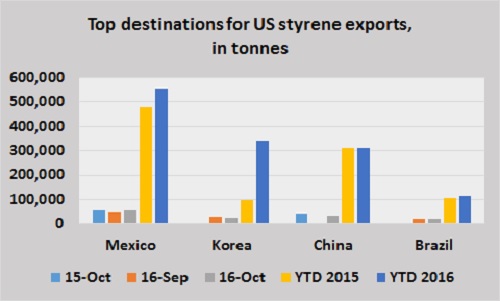 During the first nine months of 2016, China was the third-largest recipient of US styrene exports, behind Mexico and South Korea.

The biggest story with regard to US exports in 2016, however, was the emergence of South Korea as a major destination for shipments. The US exported 341,997 tonnes of styrene to South Korea during the first 10 months of this year, which was up by 247% year on year.