Home News OUTLOOK ’17: Abundant supply may weigh down US propylene

OUTLOOK ’17: Abundant supply may weigh down US propylene

HOUSTON (ICIS)–Pressure on the US propylene market is likely to persist in 2017 as supply is expected to remain long because of increased production, ample inventories, as well as overall steady demand.

New propylene capacity is scheduled to come online in 2017 with the start-up of a new propane dehydrogenation (PDH) unit in Mont Belvieu, Texas.

Enterprise Products is expecting commercial operations at its 1.65bn lb/year (750,000 tonne/year) PDH unit to begin in the second quarter.

The US propylene market has already seen capacity increase with the December 2015 start-up of Dow Chemical’s 750,000 tonne/year PDH unit in Freeport, Texas.

While Dow has been up and down for maintenance and repairs during much of 2016, the PDH unit is said to be operating at designed rates. Sources expressed sentiment that Dow is just dealing with issues associated with starting up a large plant, and there is expectation that the PDH unit will run more consistently in 2017.

Meanwhile, two crackers are restarting before the end of 2016 after completing scheduled turnarounds and expansion projects. With additional ethylene capacity, market participants are anticipating higher yields of co-products, such as propylene.

Ethylene and co-product output is expected to increase further in 2017 with the start-up of four new crackers, as well as the restart of an idled unit.

If crude oil prices remain low, the cracking of heavier feedstocks, such as propane and butane, could continue to be attractive, as cracker co-product credits can provide benefits by reducing the cost of ethylene production.

These factors are expected to lengthen what is already considered long supply. 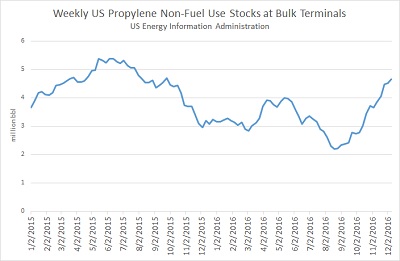 Data from the US Energy Information Administration shows that propylene stockpiles in the first half of 2016 have been about 30-50% below levels from the same period in 2015. However, propylene inventories have been on an overall uptrend since bottoming out in mid-August, rising above year-on-year levels in November.

Propylene inventories in the week ending on 9 December totaled 4.652m bbl, up 46% year on year.

“Inventories are going up fast, and they are much higher than the same time last year,” a buyer said. “If [producers] don’t work to lower inventories, they have a risk that high inventory levels will keep depressing prices for a long time.”

RGP demand from the gasoline pool should be strong as low gasoline prices incentivise more production. However, increased refinery rates will lead to oversupply of RGP, and demand from the chemical sector will likely remain soft.

The RGP-to-PGP spread has widened to 13-14 cents/lb from the typical 8-10 cents/lb, making margins from propylene splitters attractive.

Sources said that RGP prices could fall even further, and buyers are expected to pressure producers to lower PGP prices, particularly to keep out derivative imports. 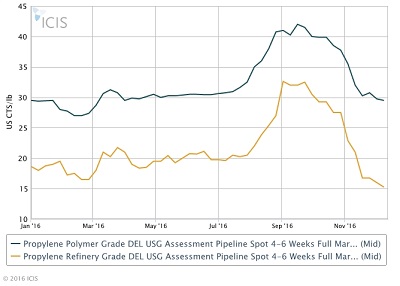 While some participants believe consumption levels will be healthy in December and into the new year, abundant availability is likely to continue to outpace demand, keeping sentiment bearish.

Demand is expected to grow along with GDP, but the US propylene market is not anticipating a significant boost in consumption from new derivative capacity. The North America region could see as many as six new polypropylene (PP) projects in the coming years, with some final investment decisions (FIDs) expected in 2017, but no major plant start-ups in the near future.

“I’m expecting for ‘new’ demand to have to open up to help balance the oversupply in the US market – things such as increased monomer exports and possibly increased polypropylene exports – or a reduction in the imports,” another buyer said.

Some sources are expecting the US to export more propylene now that Enterprise Products has opened its new terminal on the Houston Ship Channel, which has the capability to load 5,000 tonnes/day of refrigerated PGP.

However, others said that they have not seen a significant increase in propylene exports since the Houston Ship Channel terminal opened in mid-2016 compared with when Enterprise was using the old Odfjell terminal.

While many participants are not expecting a surge in demand for propylene exports in 2017, the new terminal allows the US region to have the opportunity and the ability to export volumes when arbitrages do occur.

Regarding trade flows for derivatives, there is potential for the US to export more PP if prices remain more attractive than those in other regions.

However, it remains to be seen if the US market will see a similar situation with the first half of 2016, where high propylene and in turn high PP prices enabled an influx of PP imports to flood the US region.