OUTLOOK ’17: US ethane demand to strengthen on new crackers, exports 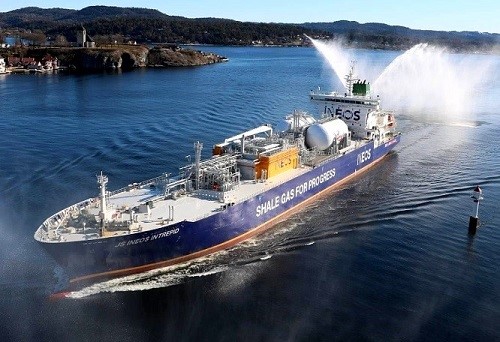 HOUSTON (ICIS)–US ethane prices have doubled since the beginning of 2016, mostly owing to much stronger natural gas and crude oil values.

Demand was limited and supplies were strong when the year began. Export terminals were still under construction, and ethylene plants were starting the first wave of a heavy turnaround season that lasted most of the year.

However, prices should continue to rise in 2017, as exports and new ethylene plants boost demand. 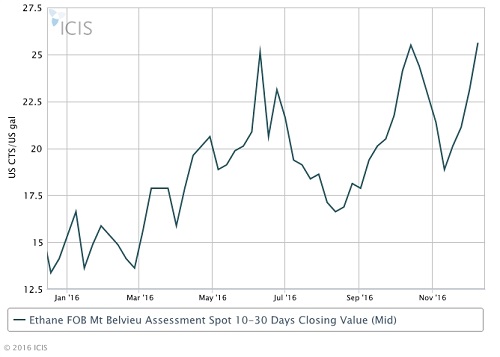 The first exports of ethane departed US shores this year. Sunoco Logistics opened its Marcus Hook Terminal in Pennsylvania in the first quarter. The first shipment from that facility left in early March, headed for INEOS’s Rafnes cracker in Norway.

In July, Enterprise Products Partners opened its ethane export terminal at the Houston Ship Channel in Texas. The first shipment of ethane left that facility in September. It was also going to an INEOS cracker in Europe.

Accordingly, the US Energy Information Administration (EIA) reported exports in September were at their highest level ever at 3.5m bbl. Exports have been steadily increasing since 2014. 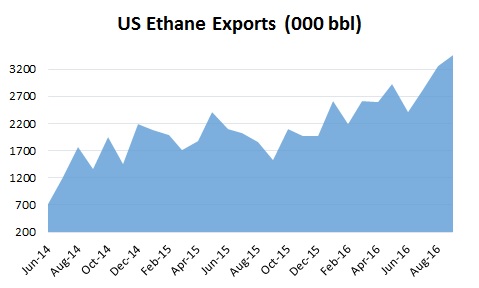 Currently, Canada is the primary market for US ethane. However, sources said exports will increase in 2017, as Europe and Asia become bigger importers.

US ethane prices may not look as favourable to those overseas once the first wave of new crackers comes online in 2017.

Occidental Chemical/Mexichem’s 544,000 tonne/year cracker in Ingleside, Texas, will be the first to come online, scheduled for a first-quarter start-up.

If all goes according to plan, there will be at least five more crackers running by the end of the year, which would increase ethane demand by more than 7m tonnes.

Many market players believe this dramatic uptick in demand will leave the US Gulf (USG) short of ethane. So it will become integral to develop infrastructure that frees stranded ethane from infrastructure-disadvantaged regions, such as US northeast or Rocky Mountains region.

Enterprise Products Partners CEO Jim Teague said in a recent investor call that they could build a pipeline from the Marcellus Shale field in the US northeast to the USG in 18 months from the time of decision.

This lack of infrastructure is a primary reason that rejection has been estimated at 500,000-700,000 bbl/day, depending on location.

Ethane rejection is a process in which ethane is left in the natural gas stream and sold with methane to power, cool and heat homes, businesses and manufacturing facilities.

Lately, the rising price of natural gas, due to seasonal demand factors, has pressured ethane fractionation margins into the negative, encouraging even more rejection. 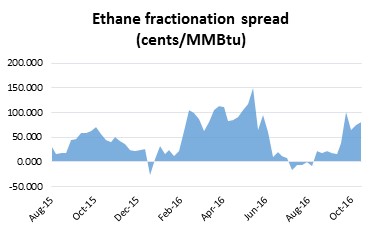 Regardless, demand will soon outweigh supply when it comes to the ethane market.

Houston-based consultant Dan Lippe noted that ethane prices spiked dramatically in the weeks leading up to the first ethane exports.

He said there has also been a lot of pre-buying as crackers come back from turnaround, and there will be more as the new crackers come online.

“Pre buying enables chemical companies to minimise their impact when four or five new plants will start up within a 12-18 month period,” he said. “Sellers, however, will always know when a new buyer is making purchases in the spot market … the universe of ethane buyers is so small that every new buyer will have an impact on prices – particularly if a significant fraction of inventory in storage belongs to domestic ethylene producers or international producers.”