OUTLOOK ’17: US PS supply adequate, demand on the rise

HOUSTON (ICIS)–The US polystyrene (PS) market will begin 2017 with adequate supply and stronger demand, especially after the slow demand months of November and December.

Demand during the final two months of the year is reduced as a result of seasonality patterns.

The final two months of 2016 saw PS market participants involved in inventory management. January, however, is a month in which demand will rise back to a more normal level.

It is also a time of year when weather can become a factor. Snow and icy conditions can slow logistics down considerably. January will also see a bit of pre-planning for spring. 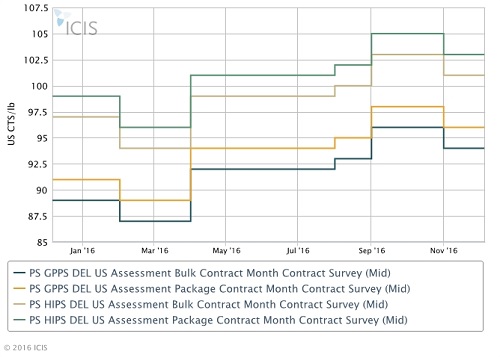 US PS prices will largely follow the direction of feedstock benzene prices in 2017, given that benzene is the largest determining factor in PS price direction. However, PS supply and demand fundamentals will also come into play in pricing decisions.

Benzene accounts for about 75% of the cost of the other major PS raw material – styrene – and was a prime mover in the market in 2016. A popular rule of thumb holds that PS prices move 1 cent/lb for every 10 cents/gal move on benzene contract prices.

PS contract prices have yet to be determined for January, after rolling over in December and decreasing by 2 cents/lb in November for most accounts. Historically, January prices increase or roll over, but rarely weaken.

The spread between PS and benzene began to widen in 2014, and then widened significantly at the start of 2015 as benzene prices fell sharply. The spread remained wide during 2015 and 2016. 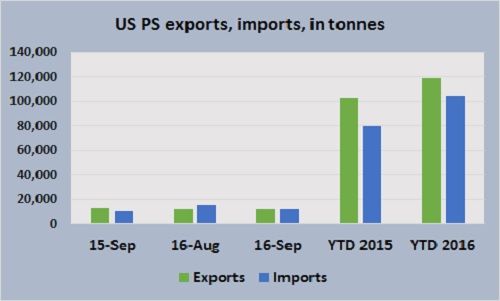