Home News OUTLOOK ’17: This could be year of the ‘Braskem Effect’

OUTLOOK ’17: This could be year of the ‘Braskem Effect’ 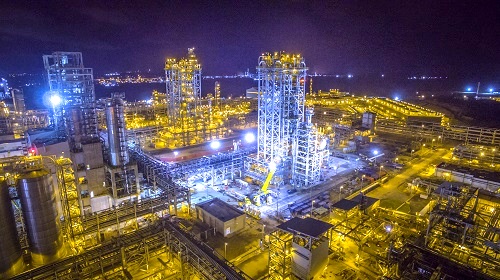 Braskem Idesa’s Ethylene XXI complex in Mexico will be a “big brake” on North American HDPE and LDPE exports to Mexico and Latin America in 2017. (Braskem Idesa)

HOUSTON (ICIS)–What sounds like a thriller novel, the “Braskem Effect” will become a recognisable data point in North American polyolefins in 2017.

Some experts expected the startup of the Braskem Idesa’s Ethylene XXI joint venture cracker and polyethylene (PE) project in Veracruz, Mexico, to have a big impact on US producers in early 2016. But the delayed startup of the project, which finally was inaugurated in May, postponed the fallout for a few months.

One longtime PE watcher said the unit did not really begin producing until the fourth quarter of 2016. That source said the Braskem effect will be a “big brake” on North American high density (HDPE) and low density (LDPE) exports to Mexico and Latin America in 2017.

Recent export data show the Braskem effect already at work. Data from the International Trade Commission (ITC) showed US exports to Mexico declining in September and even more in October.

US PE exports to Mexico, in tonnes

The Braskem plant is a big ripple in the first wave of North American PE projects coming online in 2016-2018. US PE capacity could easily expand by 20-25%.

Gregg Goodnight, vice president at Chemical Market Resources, said 3m tonnes of new PE and cracker capacity has been added in North America in 2016, including the Braskem project.

“So we’re getting a little bit of a dry-run in preparation for the deluge that is coming,” Goodnight said. 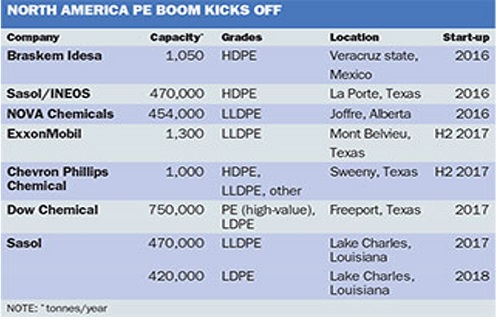 Whether the US is ready for the new capacity is another matter.

US polymer producers are doubtful that enough infrastructure improvements will be ready – especially in Houston and the US Gulf Coast region – when the North American PE boom hits full-force in 2017-2018.

Speaking at a conference in Houston, Scharchburg said he is pessimistic that concerns about insufficient rail lines and shipping containers will be addressed by the time INEOS starts up its new PE units in the US Gulf Coast over the next two years.

“We’re planning on stretches of time when there will be trouble,” Scharchburg said.

“I don’t hear that same question about the ports on the west coast,” Bond said.

Added Rick Lissa, senior director of logistics management at Formosa Plastics: “The question mark everybody has is are there enough containers [in Houston].”

A poll of those attending the conference found that 90% said that US polyolefins producers would be able to compete price-wise with Middle Eastern producers and those in China, India and Europe once the boom kicks in during 2017-19.

But American producers will have to cut prices, Bond said, predicting that US PE margins will begin to compress in late 2017. 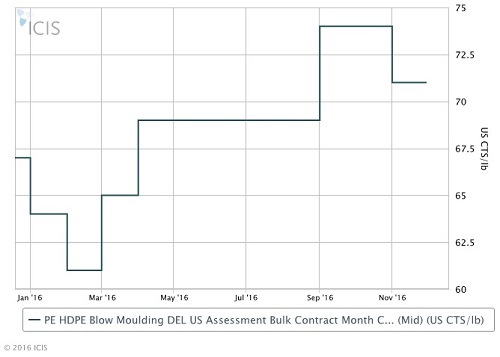