OUTLOOK ’17: US ABS demand to begin on strong note

HOUSTON (ICIS)–US acrylonitrile-butadiene-styrene (ABS) demand in the first quarter of 2017 is expected to be bolstered by higher Asian ABS prices.

ABS demand typically drops off in November and December due to seasonality factors, but higher prices in Asia began impacting demand for US product in December.

CFR (cost and freight) northeast Asia general purpose injection grade ABS prices jumped by 33% from 13 May until early December. Similarly, the same grade of ABS on a CFR southeast Asia basis rose by 25% from 17 June through early December. 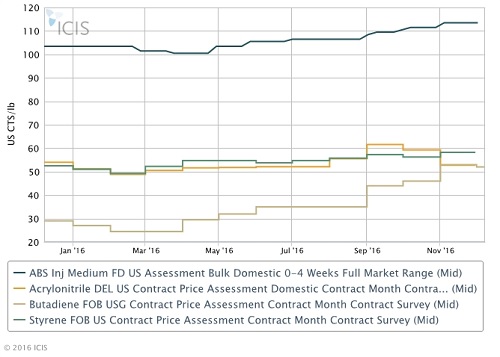 However, some market sources said that Asian prices may have gone too high too quickly, and prices could soon face downward pressure as a result.

Even as Asian ABS prices began to rise in the summer of 2016, they remained competitive into the US market for most of the year. As recently as mid-November South Korea imports were heard to be coming into the US at deflated prices.

South Korea is by far the largest exporter of ABS to the US market, supplying 42% of total US imports during the first 10 months of 2016. Mexico and Taiwan round out the top three ABS suppliers to the US market. 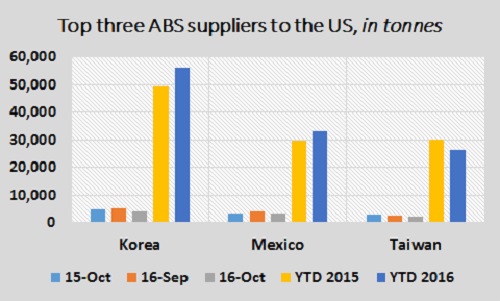 For the most part, market participants are expecting US ABS demand to continue to be healthy in 2017, primarily driven by good levels of consumption from the downstream automotive market.

The compounding market is also expected to continue to do well, especially for blends with polycarbonate (PC).

Some ABS prices in the freely negotiated contract market rose during November and December, mostly in response to higher Asian prices. Those price increases were largely for various extrusion grades.

The US market in 2017 will continue to monitor import levels to see if competitive pricing will disturb the balance in the domestic market.

Major uses are in the automotive and electronics sectors. Other applications include appliances, pipes, fittings and other construction products, as well as recreational items such as boats, mobile phones and games consoles. Lego bricks are also made from ABS.