HOUSTON (ICIS)–US styrene butadiene rubber (SBR) supply and demand in 2017 will depend on how much imports the region will continue to see, as well as how much domestically made rubber will be consumed by new tyre plants.

During the first quarter of 2016, the US market was inundated with low-priced imports, particularly from Asia. This pressured down US SBR prices and squeezed producer margins, as costs for main feedstock butadiene (BD) were much higher in the US compared with Asia.

With import levels significantly higher year on year, some US producers filed antidumping petitions in July on imports of emulsion SBR (E-SBR) from Brazil, Korea, Mexico and Poland.

“Even most of our customers believe there is a high probability due to the just astronomically low prices they are offered from imports,” a supplier had said. “They said they had to take their pricing offers to remain competitive against others taking their pricing offers.”

The US Department of Commerce is expected to announce a preliminary determination in late December, with final determinations from the department and the US International Trade Commission (ITC) in the spring of 2017.

Still, there is optimism among some participants that the US market will benefit from a potential affirmative determination.

“The antidumping conclusion next year will certainly reduce the overall volume of imports and should strengthen the spot and contract markets,” a source said. 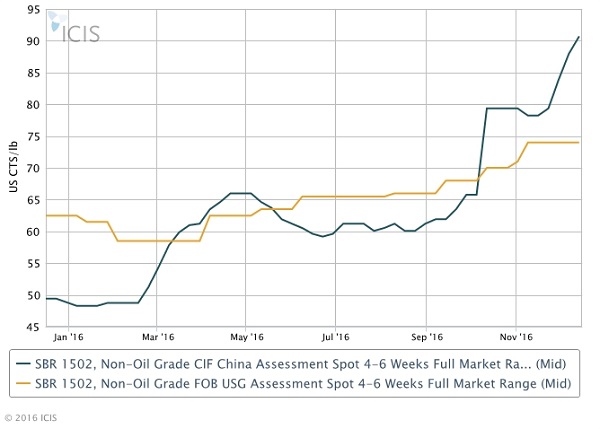 Low-priced imports were being offered all year, although they were not quite as prevalent after the first quarter, as high BD and natural rubber (NR) prices in Asia pushed up SBR values there.

In fact, short-term arbitrages have enabled US suppliers to export to Asia, something that seldom occurs. The US region saw this opportunity occur in the spring, as well as in the current market.

“The ironic thing is that we have the domestic producers complaining about dumping prices into the US, and yet, they are ready to export SBR at lower prices than the US to China,” another source said.

In the major downstream market for tyres, there have been a number of antidumping and countervailing duty investigations on imports from various countries in Asia. 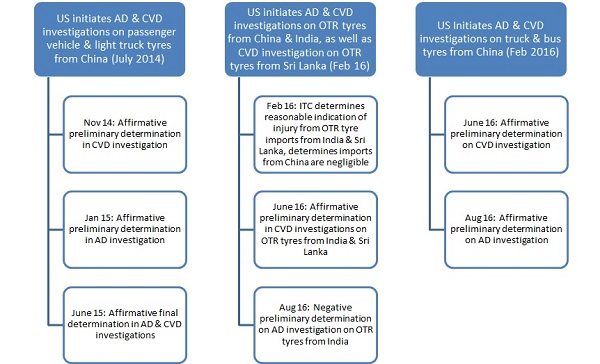 Heading into 2017, US market participants will be monitoring whether Asia BD prices, and in turn SBR prices, will remain high and enable future exports.

Market participants said demand in 2016 have increased slightly, and this is likely to continue into next year.

“2017 looks to be pretty similar in volume as to 2016, with some industry declining and others picking up,” a source said.

From the main downstream tyre market, the Rubber Manufacturers Association (RMA) forecasted in mid-December that tyre shipments will increase slightly in 2016. Shipments of passenger car tyres are projected to slip year on year, but shipments of light truck tyres are expected to increase, resulting in an overall 0.3% gain in tyre shipments industry-wide for 2016.

Additionally, several new tyre plants are beginning production in 2016 and 2017, which will increase SBR demand.

However, market participants cautioned that those new tyre plants in the US may not consume domestically produced SBR.

Some sources are hoping that half of the rubber required by those plants will come from the US market.

Others speculate that US suppliers will see little, if any, increase in demand from those new tyre plants.

ICIS produces a monthly Global Automotive report covering the major automotive chemicals markets, the auto-industry, the IBAPs and macroeconomic trends. For more information on the report and details on how to subscribe, please click here