HOUSTON (ICIS)–The US xylenes market enters 2017 in the midst of a major shift in the country’s position in global trade flows.

Historically, the US has been a significant net exporter of both mixed xylenes (MX) and MX derivatives, principally to Asia. In recent years, however, Asia has been building up large new capacity reserves of both MX and paraxylene (PX), the most widely-used MX chemical derivative.

According to ICIS data, PX accounts for more than 80% of chemical demand for MX, with the share expected to continue to grow in the years ahead. 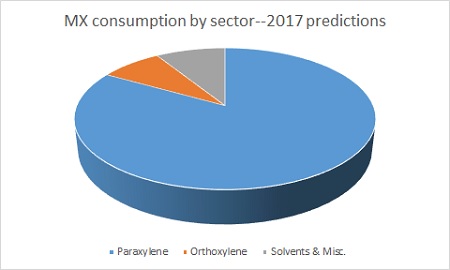 As a result of the large build-up in Asian MX and PX capacity, US exports of both products are expected to fall.  For MX, the US has moved from a large net export position to a small net import position. Forecasts call for the US xylenes market to remain a small net importer in the next few years.

Although export opportunities for US MX suppliers are narrowing owing to large new capacity additions in Asia, domestic demand for MX is set to grow over the next few years.

Demand growth for MX is driven on the chemical side by PX, a key feedstock used in the manufacture of polyesters and polyethylene terephthalate (PET).

Producers are aggressively building up PET capacity throughout the world and Italy’s M&G is expected to begin production at a new 1.1m tonnes/year plant in Corpus Christi, Texas, in the first quarter of 2017.

According to the Energy Information Administration (EIA), the US is likely to set an all-time record for gasoline exports in November 2016 while the agency also projects a new record high figure for gasoline consumption in the US. In addition to its chemical uses, MX is also used as an octane booster in gasoline blending.

In the summer of 2016, ample US supplies of octane components kept MX prices relatively depressed, marking a sharp change from 2015, when large volumes of MX were exported for gasoline blending, pushing prices higher in the summer.

Spot MX prices reached their high point for 2016 in October owing to supply limitations. Prices came back down in November but rose again in December after an OPEC agreement to limit crude oil production pushed up crude oil and gasoline prices.

MX is typically extracted from refineries along with other aromatics, but refiners have the option of leaving MX in the gasoline pool when this seems more economical than selling MX or its derivatives for refiners integrated with MX derivate production. 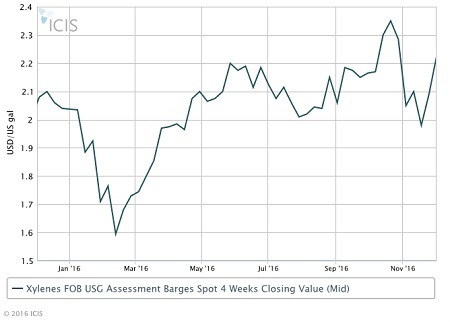