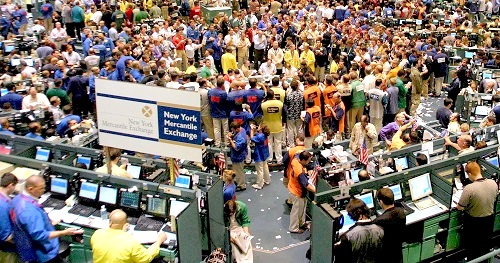 The most notable rallies occurred among companies that make titanium dioxide, with one firm showing a swing of more than 700% from its 52-week low. (Sipa Press/REX/Shutterstock)

HOUSTON (ICIS)–Many of the chemical stocks traded on US exchanges recovered from their lows reached in the early part of 2016 and approached their 52-week highs.

ICIS follows more than 60 chemical, midstream and fertilizer stocks that are listed on various US stock exchanges. Out of these, several were close to their 52-week highs as of 9 December.

Some had rallied sharply from lows hit at the start of the year, when the stock market had another correction.

Indices thus fell by more than 10%, taking several of the stocks covered by ICIS down with them.

The Dow Jones US Chemicals Index fell below 435 in mid-January 2016, after breaking 560 in the first part of that year.

At the time, investors were worried about the outlook for global growth. Commodity prices fell, and crude dipped below $30/bbl.

Stock markets began recovering in mid-February 2016, when news arose that OPEC members could meet for a possible agreement about limiting production. Some major producers would actually agree to such a freeze, sparking a stock rally that has yet to relent.

In November, the election of Donald Trump as president gave the market more strength, because investors expected the new head of state would lower taxes, simplify regulations and increase spending through an infrastructure programme.

The Dow Jones US Chemicals Index was up 36% from its 52-week low.

The most powerful rise occurred among companies that make titanium dioxide (TiO2). US-based Chemours was by far the best performer among the companies followed by ICIS, with stocks rising from a 52-week low of $3.06 to more than $25. That is a swing of more than 700%.

The TiO2 market bottomed out at the same time as oil prices. Both subsequently recovered, leading to the sharp spike in stock prices for companies that make the pigment.

Brazil-based companies Petrobras and Cosan also rose sharply from their 52-week lows. This reflects the recovery in Brazil’s stock market, which rallied as it became increasingly likely that then-President Dilma Rousseff would be impeached. She was ultimately replaced by Michel Temer, who has proposed business-friendly policies.

Despite their performance, Petrobras and Cosan are far from their 52-week highs.

On the other hand, Brazil-based polyolefins producer Braskem was trading near its 52-week high and was up nearly 80% from its low.

Several companies also performed well even though they lacked triple-digit jumps in stock prices. Those include Methanex, which makes methanol; Albemarle, which makes lithium and catalysts; and A Schulman, a plastics compounder.

A Schulman is a special case, as its stock fell quickly in August after it lowered its guidance. It then rallied after former CEO Joseph Gingo returned to head the company.

Many fertilizer producers were trading near their 52-week highs as of 9 December, although none posted gains that exceeded 50% from their lows. The industry is suffering from low crop prices. When farmers earn less money from their crops, they cut back on fertilizers and agrochemicals.

Despite the rally, not all of the fertilizer companies are near their 52-highs. Nitrogen producer CF Industries still has a ways to go.

Midstream companies had also recovered from their lows, while still being well below their 52-week highs.

Overall, US refiners were mixed. Some were up appreciably from their 52-week lows. Others were up, but still lagged far from their earlier highs.

Calumet Specialty Products, a specialty refiner, was the worst performer among the ICIS companies. It was trading close to its 52-week low and down more than 80% from its high.

Earlier in the year, Calumet suspended distribution payments to its unit holders. Calumet investors own units instead of stock because the company is a limited partnership. The company also replaced its CEO this year.

Major paint producers Sherwin-Williams and PPG Industries were near the bottom of the rankings, both in terms of percent gains from their lows and in terms of distance from their previous highs.

The following tables list the best and worst performers among the companies followed by ICIS. The prices are based on the stocks’ closing on 9 December.