HOUSTON (ICIS)–US prices for toluene are likely to follow developments in markets for gasoline and other major aromatics such as benzene and xylene.

The US toluene market is structurally long with much recoverable product being left in the gasoline pool.  Toluene can be used as an octane booster in gasoline.  This source of demand generally peaks during the summer season as summer gasoline specifications do not permit the use of cheaper octane boosters such as butane.

In 2016, ample supplies of gasoline in the US kept toluene prices depressed during the normal high season. 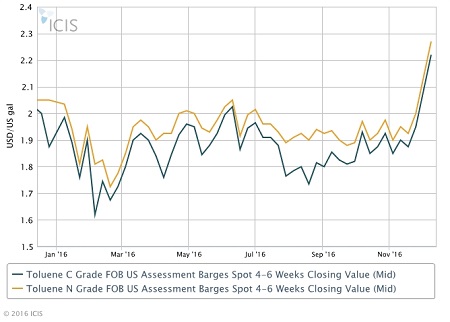 For 2017, the Energy Information Administration (EIA) projects a new record high figure for gasoline consumption in the US, suggesting that toluene prices may find some support from the gasoline market.

In the chemical industry, toluene is most commonly used as a feedstock to produce other aromatics such as benzene and xylene.

According to ICIS projections for 2016, around 44% of toluene consumption in the US chemical sector is accounted for by toluene disproportionation (TDP), which converts toluene into benzene and xylenes.

Standard TDP units producers an equal mixture of benzene and xylene while selective toluene disproportionation (STDP) produces a PX-rich stream of MX with benzene as a co-product.

Another 34% of US chemical consumption for toluene is accounted for by Toluene hydrodealkylation (HDA), which converts toluene into benzene and methane. 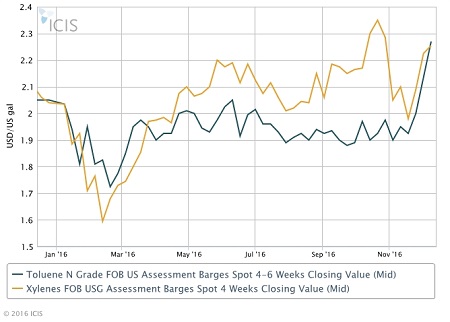 US trading sources say that conversion unit operators look for a premium of at least 20 cents/gallon to justify the economics of toluene to benzene conversion. 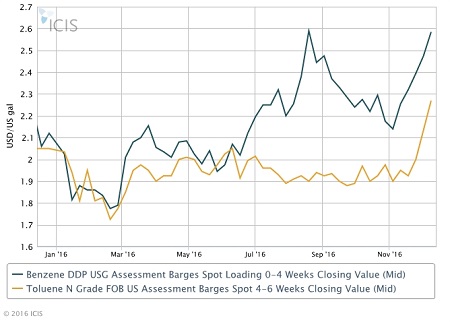 According to ICIS projections for 2017, TDP is expected to grow to take a 48% share of chemical demand for toluene while HDA demand will slide to around 31%.  Other key toluene derivatives include toluene di-isocyanate (TDI), a major raw material for the polyurethanes industry, and toluene demand from the solvents sector. 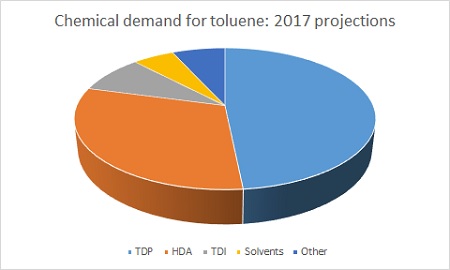