HOUSTON (ICIS)–While benzene values have been strengthening in late 2016, the market is uncertain that the strength will hold moving into 2017.

US spot benzene prices have been climbing since early November, strengthened by a variety of factors. 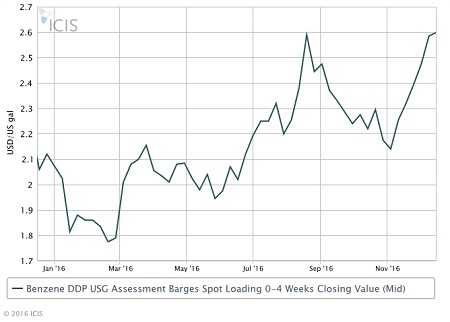 A rally for upstream crude oil values lifted benzene prices in early to mid-November. While crude oil levelled off around to around $50/bbl in mid-December, benzene continued climbing on its own fundamentals.

On the supply side, there was tightness in the benzene market due to issues at several US Gulf refineries including a several-days shut down of crude distillation and downstream units at a Marathon refinery in late November and a fire at an Exxon refinery also in late November.

On the demand side, China’s appetite for benzene ahead of its Lunar New Year holiday pushed up prices in the US. Market sources estimate up to 25,000 tonnes of benzene was fixed for export to China during December.

The combination pushed benzene prices during December to their highest point of 2016 and widened the spread between the aromatic and upstream crude oil futures to one of its wider points during the year. 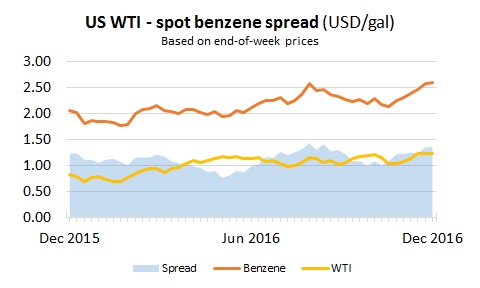 But the December gains could be temporary, with units restarted at the refineries and with the window closed for shipments to reach China ahead of its holiday season. Market sources are unsure if demand for exports to China will return after the Lunar New Year season. If the demand does return, benzene prices could strengthen again in February.

Looking further ahead, the benzene market is expected to be under some downward pressure from softness in consumption levels in 2017.

Downstream consumption in the first quarter is expected to be impacted by maintenance outages or partial outages at several styrene plants. Styrene is the largest consumer of US benzene and has a strong influence on benzene pricing.

The second largest consumer of US benzene is the phenol sector, for which benzene consumption in 2017 is expected to remain relatively steady to 2016 levels despite the start-up of a second line for one phenol producer. During 2016, consumption had been lower than the prior year due to some rationalisation.

Another part of the benzene derivative picture is nylon, for which benzene consumption is expected to be lower in 2017 after the closure of caprolactam (capro) production at a plant in Georgia due to unfavourable market conditions. Capro is an intermediate chemical in the nylon chain.

However, lower import levels could counteract lower consumption levels, especially in the first quarter during the styrene turnarounds. Shipments expected to be sent from South Korea to the US in November were about 20% lower than the previous months, which could hamper US import levels in January. South Korea is the largest source of US benzene imports.

The US benzene market is structurally short and relies on imports to meet about 20% of consumption. Low import levels can drive benzene prices higher.

Benzene prices should continue to be supported by an upstream market which is expected to be stronger than in 2016. The Energy Information Administration (EIA) in its most recent Short Term Outlook is predicting WTI and Brent crude oil prices to remain near $50/bbl for the first half of 2017 and reach around $55/bbl by the end of 2017.