HOUSTON (ICIS)–Sulphur prices in North America moving into the New Year are somewhat uncertain, as weak phosphates markets and a recent spike in sulphur prices battle against one another.

North America benchmark prices have gained ground from multi-year lows earlier in 2016. Since August, prices in Canada have risen from an average of $70.5/tonne to $86.5/tonne FOB (free on board) Vancouver. 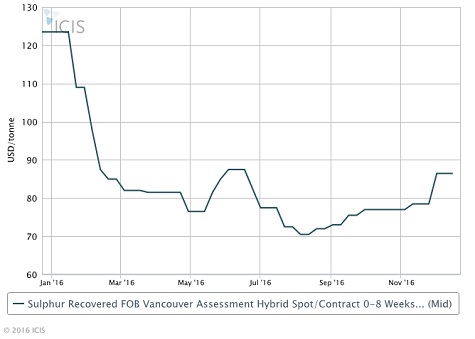 Some of this is connected with stronger prices in China starting in October, which came as somewhat of a surprise to the global market. Middle East sulphur prices moved up during the fourth quarter lending further support to benchmark sulphur prices.

However, not all of the gains in Vancouver were led by the international market.

Vancouver and the US west coast have spent much of 2016 extremely tight in supply, first from the Fort MacMurray wildfires in Canada in April, then from flooding, and a slow ramp-up from both to solid production. This supported higher prices toward the end of the year.

Sulphur production in western Canada fell as low as 245,706 tonnes in May, during the climax of the wildfires that shuttered many production sites completely. That level is 34% lower than the 372,797 tonnes produced in May 2015.

Of this total, production via oil sands processing was 37% lower than in April 2015.

By August, the most recent data available, there was an improvement, with Syncrude production at 77,120 tonnes. That represented the third consecutive month of strong upward movement. The fires in Fort McMurray had a large impact on production in the area. The data shows continued movement back toward more normal production levels.

When production suffered, exports did as well. Vancouver vessel exports fell in June to 134,000 tonnes, the lowest amount shipped since June of 2014, according to Metro Port Vancouver.

Exports have mostly recovered, with the most recent data showing 215,000 tonnes sent in October. But product is definitely in short supply to send, with at least one major sulphur marketer in Canada having said they would not be able to participate in potential spot cargoes before the end of 2016 due to supply issues. 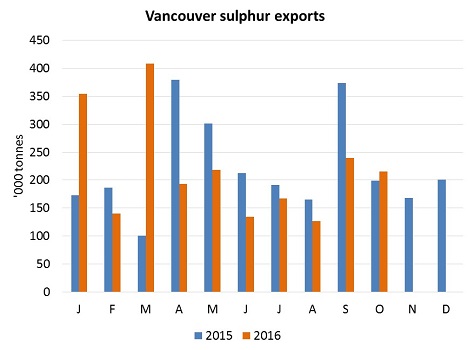 The same landscape has emerged in the US west coast, with export prices heard reaching into the mid-$80s/tonne FOB California and suppliers unable to get a full cargo together

US Gulf prices have ticked upward as well, by about $10/tonne, after a long steady period. This may be due to a spot cargo that was shipped from the US Gulf to Fertinal in Mexico.

That is not a trade flow that has been seen recently and has peaked much of the market’s attention.

Pricing details were not heard on the vessel, but it was understood that the spot range for the region rose into the mid/high-$70s/tonne FOB around the same time.

For the first quarter, throughput numbers from Mosaic’s remelter in Florida will be of interest. It is thought that the facility has processed between 300,000 and 500,000 tonnes, slightly below what was previously thought.

Also looking forward, Fertinal has returned to the market and is expected to need several cargoes in 2017. Cuba will require an additional 160,000 tonnes/year for Sherritt’s acid facility.

Fertilizer major Mosaic will acquire the fertilizer operations of Brazilian multinational Vale for an aggregate purchase price valued at $2.5bn following weeks of speculation, the US company announced on 19 December. This will give Mosaic the status of largest phosphates producer in the world.

The election of Donald Trump as the next US president of the world’s largest economy has major implications for global trade. It is early still to say what impact there might be on the sulphur market and related industries.