OUTLOOK ’17: US caustic soda to soar on alkali wings

HOUSTON (ICIS)–For US liquid caustic soda, historically a slow-growth, mature chemical commodity, 2017 is expected to be a growth year for US material.

In fact, the forces that pushed US liquid caustic prices higher in 2016 are only expected to gain strength in 2017 and are likely to keep pushing well into 2018, according to a growing market consensus.

US producers are expected to finish 2016 with the largest production volumes in history and with record export sales, according to projections based on the year-to-date data. 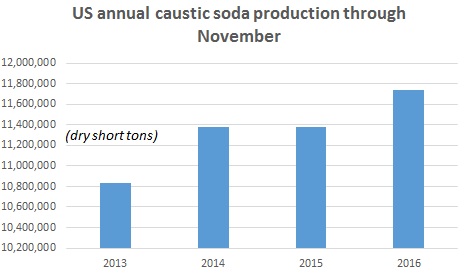 US production is likely to surge past 12m dst (dry short tons) in 2016, though final numbers won’t be available until mid-January.

But production in Europe and Asia continue to lower as environmental rules in both regions reduce output at dirty or obsolete plants.

In Europe, new rules mandate the closure of plants that use a mercury cell process by the end of 2017.

The net change in European production capacity is expected to be a reduction of about 690,000 dmt/year (dry metric tonnes).

Most of that loss can likely be made up with higher run rates than the 80% plant utilisation that has been the pace in 2016, according to market observers there.

But shutdowns for conversions of plants to be renovated to newer production methods has already imposed supply disruptions which are expected continue through 2017.

In China, supplier of caustic soda to much of Asia, plant operating rates have declined in recent years and recent government initiatives for cleaner air have shut a number, further lowering output.

For US producers, these changes mean higher plant operating rates, which will increase production efficiencies, and likely steadily rising prices.

Overseas sales which have boomed this year, up 26% to 2.46m tonnes through October, have US seller optimistic that further growth will be seen in 2017.

“On exports, we had our largest export month of the year in November and December will also be strong,” a representative of a major US producer said, adding that the company would set a quarterly export record for the fourth quarter.

US spot export prices, which have risen by an average $170/dmt from April through November, are expected to continue their upward trajectory. 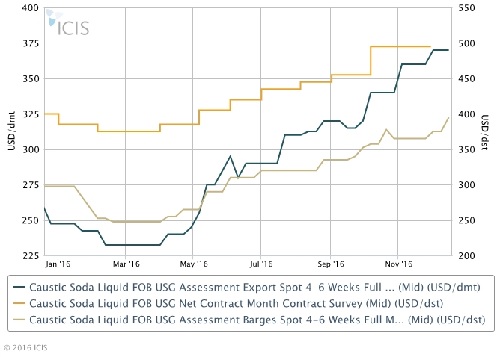 But the global rise in prices is likely to continue to apply upward pressure on US domestic contracts, as well. US contracts have risen an average of $120/dst over the same eight-month period.

Equities analyst firm Cowen and Company said in a report on 15 December that the overall market dynamics should help Westlake Chemical, the subject of the report.

“We see rising margin for caustic soda and PVC [polyvinyl chloride] based on tightened supply as a result of reduced global capacity for caustic and demand increases in excess of supply gains for PVC,” the company’s authors said in the report.

These production declines in other global regions will be slightly offset by at least one production expansion at home.

Those changes follow a two-phase round of consolidations among US producers within the year.

Olin Corporation acquired the US chlor-alkali production facilities of Dow Chemical in late 2015. In late August, Westlake Chemical acquired the assets of Axiall.

Those moves brought the number of US producers from seven to five and greatly increased the pricing power of the remaining players.