HOUSTON (ICIS)–For the US hydrochloric acid (HCl) market, there is one thing that most participants agree on: 2017 is likely to be better than 2016. Or 2015.

For the first time in two years, producers and sellers were able to get a price increase implemented in late 2016 when drilling activity began to recover after bottoming out in May.

A second increase failed. But most market participants agree that prices are likely to firm as 2017 goes along.

The only question participants have is simple and oft-stated: When will oil prices regain $65/bbl?

No one knows, though many have opinions. Projections, such as they are, tend to agree that it will likely be the second half of 2017 that crude oil prices may begin the recovery that US acid sellers say will turn their acidulous market sweet.

That is the level that most expect will help fuel a full-scale return to the glory days of 2013 and 2014 when demand was against the ceiling and prices broke through it.

At the dawn of the new year, the US HCl  market appears set for a 2017 that may include some slow upward price movement and a return of something closer to balance, if not the bounding demand and upward prices brought by frenzied drilling activity.

But most participants believe that the market will continue to loll with long supply weighing on prices as it has since sinking oil prices dragged drilling activity to a crawl. That brought a collapse of US HCl prices in early 2015 and the aftermath still ripples through the markets. 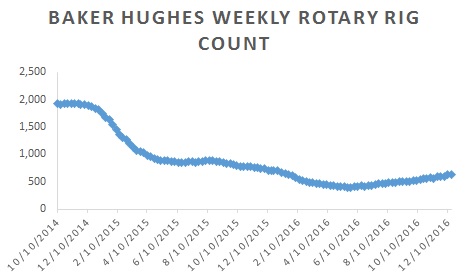 US HCl market participants are still watching oil prices and projections closely for signs of when life may return to their own market. The outlook remains rather grim.

HCl, a mature industrial chemical that traded at a penny a pound, had found new life as it became a key ingredient in the hydraulic fracturing process, the pounding of underground shale layers to create fissures to release crude oil and natural gas from rock.

That new demand brought a raft of new plants and on-purpose manufacture of HCl, also a by-product of a number of chemical manufacturing processes.

New plants came online at the pace of about one every six months from 2013 through 2015 and two newly built plants are still trying to straighten out technical problems so that they can launch applications.

Prices ballooned to above $300/wet ton in early 2013, before settling back some as new plants came on line. By late 2014, during the peak drilling period with more than 1,900 drilling rigs working in US oil fields, prices pushed up above $220/wet ton. 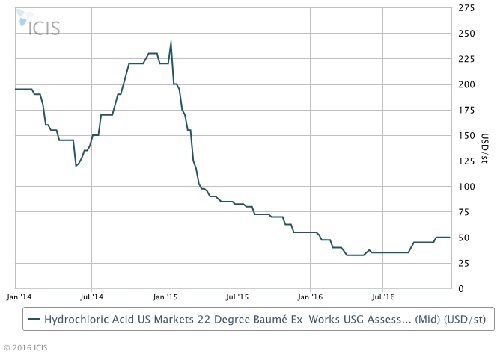 Then oil prices collapsed and drillers exited the fields. Prices fell from an average of $230/wet ton to below $90. Today they are at $50/wet ton.

But that reflects a small increase producers and distributors were able to obtain in the market in October after almost two years of sliding prices.