HOUSTON (ICIS)–The US acrylonitrile (ACN) market is anticipated to remain tight in 2017, as participants expect ongoing supply disruptions, particularly in the first half of the year.

Both the US and overseas markets experienced major supply tightness in the second half of 2016, reflecting the impact of both planned and unplanned global outages.

In particular, the unplanned outage at INEOS Nitriles’s facility in Green Lake, Texas, in July led to a significant supply shortage in the US, while also affecting overseas ACN market players.

The Green Lake facility was expected to resume production activities in December. However, sources have previously speculated that material from the facility may not become available until January or even February.

Sources noted that US producers INEOS Nitriles and Cornerstone Chemical both have planned turnarounds scheduled for May 2017, which will keep US supply tight. 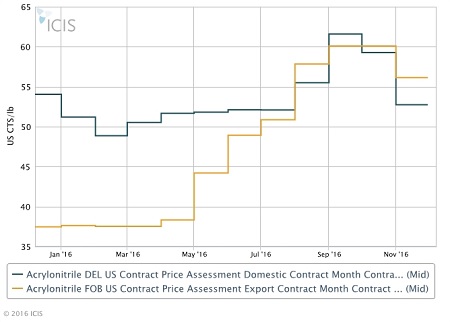 There was also speculation that other supply-related issues may appear outside the US. For example, Unigel is currently negotiating with Pemex to acquire the company’s ACN plant at the Morelos Petrochemical Complex in Veracruz, Mexico.

The 60,000 tonne/year ACN plant has been shut down since the beginning of October due to a lack of propylene supply in Mexico. Propylene is one of the main feedstocks for ACN.

According to a company source, pricing and local production in 2017 remain in question until Pemex makes a decision regarding the future of the plant.

One source said that, similar to the Pemex facility, other small-scale producers outside the US may face profitability issues and could potentially come under pressure to shut down in 2017.

While supply is expected to be tight in the first half of 2017, sources said the situation will not be as severe as the supply tightness seen in the second half of 2016, owing to the restart of the INEOS Green Lake facility.

One source expected supply to shift closer towards balanced, but said that producers would be looking to build inventories, so may end up selling less than usual.

The global downstream acrylic fibre sector has struggled in the second half of 2016, owing to significantly higher feedstock ACN prices, as well as limited availability of supply.

However, with ACN supply tightness easing, and prices anticipated to continue moving lower, demand from the sector is expected to improve.

As feedstock propylene prices move downward at the end of 2016, market sentiment has suggested that the outlook is positive for US assets in 2017. 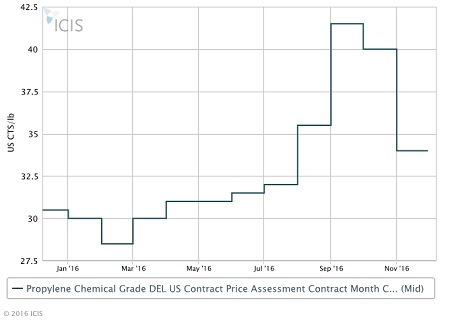