HOUSTON (ICIS)–US vinyl acetate monomer (VAM) supplies will be healthy to start 2017, with no ongoing supply issues or production problems.

Market sources are saying that the planned turnaround season will begin at the end of Q1 2017, at which time supply will tighten somewhat.

Meanwhile, demand will remain soft at the beginning of 2017, with supply readily able to meet demand. Demand will pick up over the summer during the peak paints and coatings season.

The biggest use for VAM is in the production of base resins for water-based paints, adhesives, paper coatings, films, textile finishes and chewing gum.

US VAM spot export prices are likely to fall further as demand in Latin America continues to be weak due to economic conditions in the region. 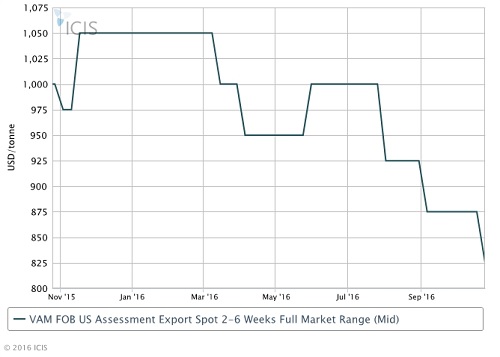 US acetic acid supplies will be long to start 2017, as demand remains soft due to downstream markets.

Downstream polyethylene terephthalate (PET) demand will be seasonally weak during the winter, with demand picking up over the summer as the weather warms up and consumption of bottled beverages increases.

Acetic acid’s use in oil and gas well completions is beginning to show some signs of life as oil prices rebound.

Acetic acid is largely used to manufacture VAM, which accounts for one-third of acetic acid consumption.

The second largest derivative for acetic acid is purified terephthalic acid (PTA). PTA is the fastest growing outlet for acetic acid, with demand being driven by a boost in PET bottle resins and polyester fibre.