Home News OUTLOOK ’17: US BDO in a turnaround, or something else

OUTLOOK ’17: US BDO in a turnaround, or something else

HOUSTON (ICIS)–A question the US butanediol (BDO) market may or may not answer in 2017 is how to characterise the current price trend.

Is it a turnaround or just a hiccup? US BDO’s price history over the past decade shows three price turnarounds, a turnaround being a reversal in price followed by a sustained trend.

Sometimes a turnaround is abrupt, as in the two year-uptrend that ended suddenly in the straight line down on the left side of the chart below, representing a 30 cents/lb price drop in the first quarter of January 2009. 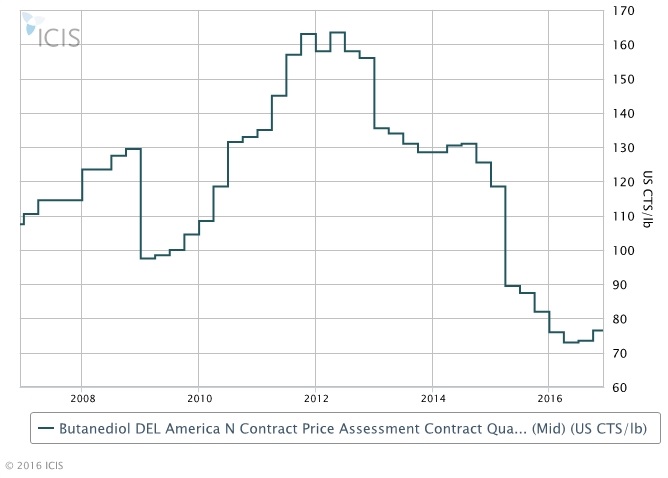 But the other two BDO turnarounds took a year and then slightly longer to kick off a trend.

Producer announcements in early December 2016 prompted talk that a correction was in the works, that BDO had entered a new era of rising prices.

Throughout the year producers repeatedly said prices had bottomed out, that the era of constantly falling prices – the steady stair-step down that began in early 2012 – was over.

Rising raw material prices provide at least some support for the hikes, with crude setting a new year-to-date high recently and natgas at a two-year peak.

Two other BDO-related feedstocks are going in opposite directions: butane is up 20% since late September, but polymer-grade propylene (PGP) is easily down by the same percentage.

“I think people see it,” a buyer said.

Another buyer noted that BDO prices have also been rising in China, where the delivery time from Xinjiang, Inner Mongolia has lengthened because of rising rail transportation costs thereby resulting in slower delivery of BDO. Major plants have also shut down for maintenance.

Nevertheless, that buyer preferred to stay neutral on the chances that the US market will accept another BDO quarterly hike.

LyondellBasell issued the smallest hike, calling for a 2 cents/lb increase. BASF announced a 3 cents/lb increase, and Ashland came out with a 4 cents/lb raise. All of the increases take effect in early January.

Major US BDO producers include LyondellBasell, BASF, Ashland and Invista.