HOUSTON (ICIS)–Feedstock pressures will continue to push on US mid-cut detergent range fatty alcohols moving into the first quarter of 2017.

Benchmark lows marked the first quarter of 2016 as C12-14 natural fatty alcohols were broadly oversupplied and at least one new importer entered the US market with aggressive pricing.

Indications for 2017 suggest that feedstock pressure from high PKO prices are likely to continue at least in the first quarter as prices remain around the $1,500/tonne level for the oil.

The underlying reason for the high PKO price is said to be drought conditions prevailing since early 2016. PKO comes from the kernel, or nut, of the palm fruit of palm plants. The palm fruit is crushed to make crude palm oil (CPO) and further refined to move the oil into the huge food sector.

Palm oil is the key vegetable oil for much of the global population, with about 90% of the palm oil going to food uses. The palm kernels are stored and then used only for crushing the oil out and using it as the feedstock for natural alcohol production and mainly the C12-14 mid-cut alcohols.

Drought conditions have reduced the number of fruits per tree on the palms, resulting in fewer kernels, thus bringing about upward price pressure on the PKO.

The US has significant synthetic alcohol production and the feedstock situation for synthetic mid-cut alcohols is different than that of the naturals. C12-15 (and other chains) synthetic mid-cuts are produced from an ethylene route by one producer and by a gas-to-liquids (GTL) route by another producer.

With ethylene and natural gas offering lower feedstock costs than a commensurate view of PKO, the margin opportunities for the natural alcohol producers are factored from a broadly different cost basis than that of synthetic producers.

This is unlikely to change in 2017 as prospects for low-priced US natural gas and ethylene prices are much stronger than prospects for a near-term fall in PKO prices. Also, the market dynamics for the agro-based feedstock are quite different than for those of the synthetic basis, given weather, land-use, labour costs and other factors that affect the one but not the other.

An additional factor for the natural mid-cuts is that alcohol production in Asia is low going into 2017, partly because of the PKO cost and partly because the bottomed prices of early 2016 discouraged production as well as exports. Consequently, natural alcohol supply is described as tight moving into the first quarter of 2017.

US buyers are cautious about the first quarter, after taking strong double-digit increases in the third and fourth quarters of 2016. First-quarter contract negotiations typically take place in December, with settlements generally completing by the first full week of January.

The following graph shows US fatty alcohol price trends. A chart of the oleochemical production process is also given. 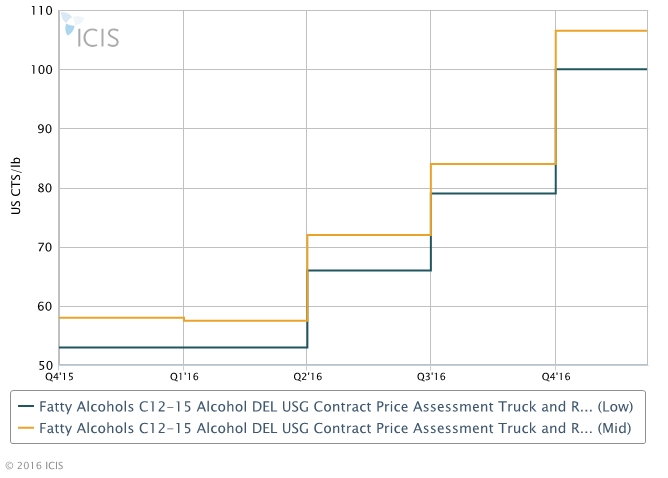 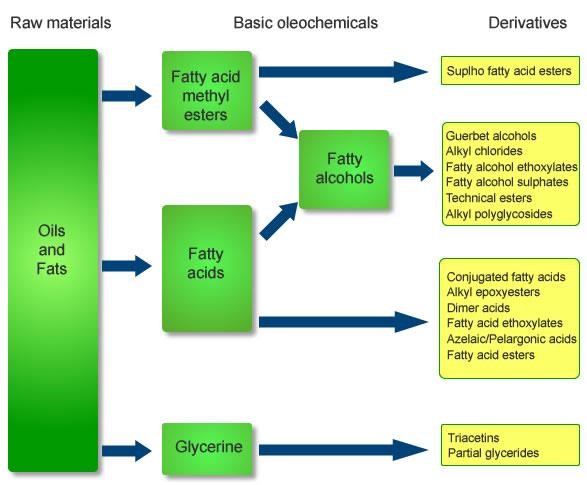