The southeast of France is facing a gas shortage if more LNG does not arrive in the coming days and weeks, according to grid operator GRTgaz.

Low send out from the Fos LNG terminals has put a strain on the TRS system, and unless more supply arrives soon, southeastern consumers’ demand requirements may not be met.

GRTgaz has called on shippers to increase send-out from the Fos LNG terminals, and will inform industry participants of the necessary send-out levels in daily updates from 4 January. This system will remain in force for the remainder of the gas winter.

The operator will also increase the withdrawal capacity from the Manosque storage site – which has had operations restricted by 50% since the start of the winter – in order to help alleviate the situation. But this will require the full shutdown of the site for a period of three days, during which send-out from Fos will need to be 12 million cubic metres (mcm)/day. 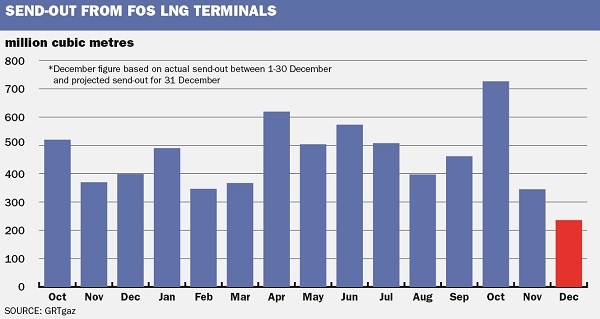 Send-out is currently projected at 7mcm on Friday, and just 4mcm/day until 23 January.

Stocks of LNG at Fos are currently low, although a vessel arrival on Friday is expected to boost LNG in store at Fos Cavaou to 153,000 cubic metres (cbm) of LNG, equivalent to 90mcm of pipeline gas. At Fos Tonkin, 37,000cbm of LNG is in store.

LNG supplies to Europe as a whole have been sluggish in recent months as high Asian prices have acted as a draw on cargoes.

The quickest way to get LNG supplies into France is from Algeria.

The low LNG supply has driven TRS prices higher in recent sessions. The spread between the TRS and PEG Nord Day-ahead contracts widened from €1.91/MWh to €4.86/MWh between 1-29 December.

Pipeline imports from northern France via the north-south link are an additional supply source for the TRS zone, but flows have been running at near-maximum capacity of around 34mcm/day in recent weeks. alex.thackrah@icis.com