HOUSTON (ICIS)–US oxo-alcohols demand in 2017 is expected to be flat to slightly better than in 2016 – especially if next winter is broadly mild.

Most sources pegged year-on-year growth in 2016 at an average of 5%, deriving principally from demand from the predominant downstream paint and coatings sector.

Some sources predict year-on-year demand will be virtually unchanged in 2017, but others expect some improvement on 2017 GDP estimates.

The domestic oxo-alcohols markets typically follow GDP, so growth in 2017 could improve on the gain in GDP – about 2-2.5%, by some estimates.

A bit more optimistic is Moody’s Analytics estimate of US GDP growth at just below 3.0% in 2017, but above 3.0% in 2018 due to fiscal stimulus expected from President Donald Trump in the form of federal infrastructure spending and tax cuts.

Oxo-alcohols supply is largely expected to balance or slightly lag demand in 2017, sources said. Part of that sentiment stems from slightly heightened demand in the spring and summer of 2016, which taxed inventories more than usual.

On the production front, BASF will start up its new 2-ethylhexanol (2-EH) plant in Pasadena, Texas, within the first half of 2017, the company said.

In 2015, the company raised $76m in financing to re-purpose a 21m gal/year (79m litre/year) ethanol plant at the site. Formerly known as the Central MN Ethanol Cooperative (CMEC), the site was acquired by Green Biologics in December 2014. 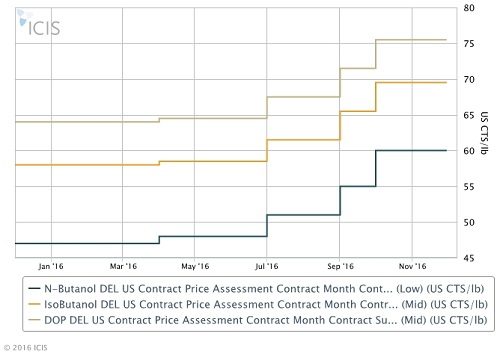 NBA is used as a solvent and to produce butyl acrylates for the coatings and adhesives industries. Smaller-volume uses are in acetate and glycol ether formulations.

Among the major uses for 2-EH are as a feedstock for chemicals used in the production of paint, automobiles, adhesives and plasticizers, and in building and construction markets.

US oxo-alcohols producers include BASF, Dow Chemical, Eastman and Oxea.