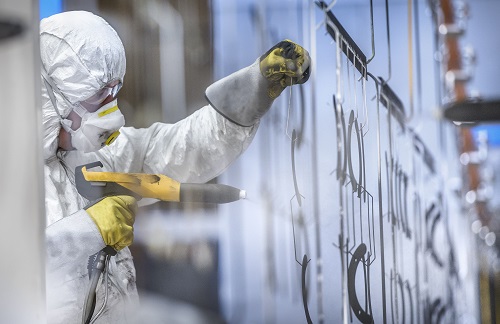 In a market that has historically reflected oversupply and thin margins even during peak demand from the downstream paint and coatings sector, the tide may turn this year. Above, a factory worker spray paints coating. (Cultura/REX/Shutterstock)

In a market that has historically reflected oversupply and thin margins even during peak demand from its principal downstream paint and coatings sector, the tide may begin to turn this year.

TiO2 and its major downstream markets, which also include paper and plastics compounding, tend to track GDP, so sentiment for growth and pricing power in 2017 is partly rooted in the forecast for higher GDP – about 2-2.5% by some estimates.

A bit more optimistic is Moody’s Analytics estimate of US GDP growth at just below 3.0% in 2017, but above 3.0% in 2018 due to fiscal stimulus expected from President Donald Trump in the form of federal infrastructure spending and tax cuts.

Another factor that dried up some of the chronic TiO2 supply overhang was capacity rationalisation throughout the global TiO2 industry beginning in 2015.

A source said that over the next two or three years, pigment producers likely will be in a good spot to improve pricing and profitability because of more balanced supply.

Also, some anticipated price pressure from upstream ilmenite ore is said to be part of what prompted TiO2 producers to seek further price gains for the first half of 2017.

A third US TiO2 price-hike initiative geared for the first half of 2017 surfaced in early December.

Tronox announced its intent to raise the price of its TiO2 in the US by 7 cents/lb ($154/tonne), effective 1 January. Huntsman is separately seeking an increase of 7 cents/lb, also effective Jan. 1.

Allowing for 90-day price protection afforded to most major US pigment customers, those increases would be implemented on or after 1 April, if successful.

Chemours, the DuPont spinoff, is separately seeking gains of about 6 cents/lb, effective Nov. 1, which means an implementation on Feb. 1, or within the first quarter, if successful.

TiO2 is used in products such as paints and coatings – including glazes and enamels – plastics, paper, inks, fibres, foods, pharmaceuticals and cosmetics.