Market sources are saying that supply has become tighter due to production problems in Q4 2016.

Dow will continue sales controls on its methacrylates (including MMA) at least through early 2017, mostly because of some scheduled near-term maintenance, according to a company source.

It is also continuing to run its MMA facility in Deer Park, Texas, at a reduced rate and expects this to remain the case until early 2017.

Meanwhile, softer MMA demand fundamentals are likely to extend into the new year. Demand will pick up over the summer during the peak coatings season.

Coatings applications drive much of the domestic demand for MMA, with the construction sector seen as a market bellwether.

US MMA contract pricing will continue to be driven by movement in feedstock barge acetone in 2017. Barge acetone fell near the end of 2016, tracking steep declines in upstream refinery-grade propylene (RGP). 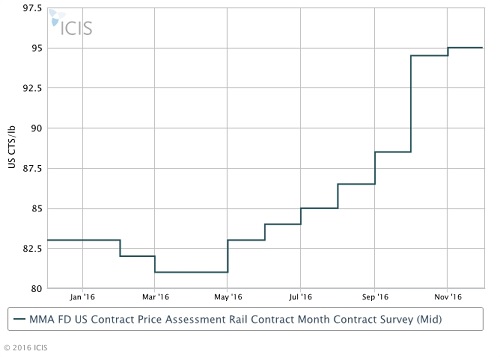 MMA prices increased throughout much of 2016 due to strong demand and higher feedstock costs. However, acrylates pricing pressure is weak heading into the new year, due to much lower upstream propylene and barge acetone contracts.

Pricing is likely to be more contentious in early 2017 as sellers try to keep prices flat in an attempt to preserve their margins. Meanwhile, buyers will want decreases in feedstock costs to be passed along to them.

MMA market participants have said they are expecting growth in line with US GDP, currently projected between 1.5-2.5%.

MMA is a liquid monomer used primarily to produce resins and acrylic polymers. It is used in the production of surface coatings and acrylic sheeting.