Home News OUTLOOK ’17: US IPA, MEK could move in opposite directions

OUTLOOK ’17: US IPA, MEK could move in opposite directions

HOUSTON (ICIS)–Participants in the US methyl ethyl ketone (MEK) and isopropanol (IPA) markets could see prices for the two solvents move in opposite directions in 2017.

In the US IPA market, participants will continue watching upstream propylene costs for price direction. 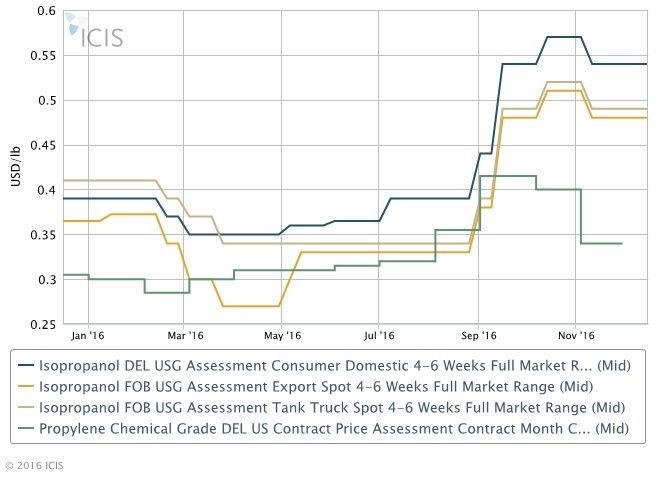 Prices had been stable at multi-year lows for most of 2016 before jumping by more than 35% in September on the back of rising upstream costs for propylene. Propylene prices rose by 3.5 cents/lb ($77/tonne) for August contracts, and 6 cents/lb for September contracts on tightness in overall supply.

One change for 2017 is that US suppliers are separately establishing a higher price for US pharmaceutical grade IPA.

Dow Chemical said in a letter to customers dated 2 December that it is seeking a 5 cent/lb increase for two grades of IPA – USP and semiconductor grade, and anhydrous and ACS grade. The company did not give a reason for the increase in the letter.

Monument Chemical, in a letter to customers on 2 December, said it is establishing a 3 cent/lb differential for electronic grade IPA and USP grade to help offset ongoing costs associated with additional testing, record-keeping and regulatory compliance required both internally and at the customer level.

It was heard this week that US suppliers ExxonMobil and LyondellBasell are separately establishing 3 cents/lb price differentials for USP grade IPA, also effective 1 January, or as contracts allow.

A distributor source said this week that suppliers had considered setting a price differential between grades several years ago, adding that it made sense because of increased costs associated with the specific grade.

“We are not going to complain because we have already invested in our facility to handle the USP grade,” the distributor said.

For US methyl ethyl ketone (MEK), prices began the year at their lowest levels since 2009 and then fell by about another 14% to their current levels. 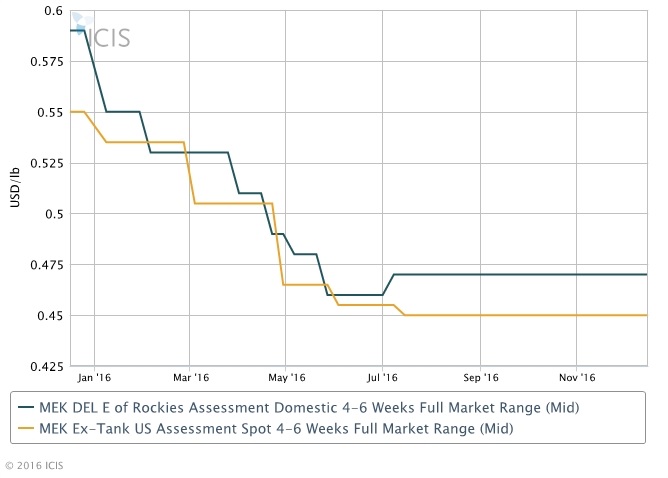 Some sources think prices have to go up because suppliers will need to improve margins after such a prolonged period at the current levels.

However, sources have said that they see nothing on the horizon that should move values in the short term.

“There is nothing going on in MEK,” a source said. “I cannot think of anything that will impact prices.”