HOUSTON (ICIS)–The outlook for the Latin American polyvinyl chloride (PVC) market into early 2017 is generally soft, but with variations depending on the hemisphere and on the country.

In Mexico, as in the US, winter slows the key PVC consuming sector, the construction industry, which will gradually recover with warming weather in the spring and rise significantly during the summer.

However, the peak construction season in South America will be tempered in 2017 by political, economic and social uncertainties in major PVC consuming countries, mainly Brazil, Venezuela and Argentina.

The recession in Brazil and a wide-spread corruption scandal have taken a heavy toll on the construction industry. Sources said that even discussions about construction projects had come to a halt during 2016.

Only in November did conversations start, but building activity still remained non-existent, the sources said. Improvement is expected for 2017, but projections vary from a substantial growth of Brazil’s construction activity to a timid, gradual recovery.

In Argentina, President Mauricio Macri devaluated the peso and removed subsidies on energy soon after he took office at the end of 2015. Under these conditions, inflation rose and the population’s purchasing power decreased, slowing the economy.

Claiming that the country rests on a solid economic foundation, local sources are projecting more controlled inflation for 2017 and reactivation of business and industry, including construction.

Domestic demand for PVC in Venezuela has greatly weakened, with no immediate recovery expected. Despite the country’s substantial oil reserves, Venezuela’s economy is distressed and unlikely to recover significantly in the near future.

Most essential products are in short supply, as the population struggles to obtain food, medicines and personal hygiene items. Under current conditions, it is difficult to project substantial improvement in Venezuela for 2017. 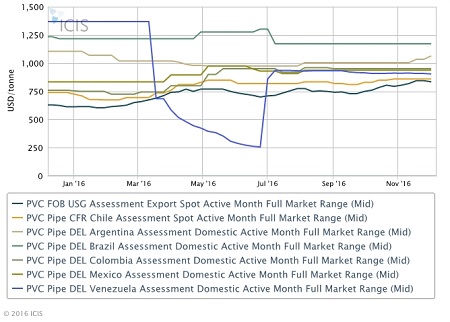 PVC demand around the world is expected to decline in December, as participants reduce inventories to minimise tax exposure.

Also affecting the PVC supply-demand balance around the world, activity in China and some parts of southeast Asia were expected to soften in anticipation of the Lunar New Year celebrations starting at the end of January.

In addition to domestic uncertainties in various countries in Latin America, market participants have expressed concern about the policies that US President-elect Donald Trump might pursue once in office.

Trump has voiced objections over current trade agreements and over US immigration policies, which could affect PVC business in Latin America and other global regions.

The International Monetary Fund (IMF) expects a recovery in GDP growth in Latin America for 2017, compared with 2016, according its World Economic Outlook of October 2016. The IMF projections for the Americas will provide insight into general demand by country.

The projections are mixed depending on country, with most countries expanding this year, while others, mainly Brazil, Argentina, and Venezuela, faced recession in 2016.