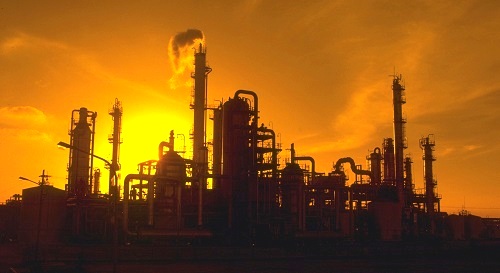 The rebound for South America’s two largest economies will not be strong in 2017, economists say, but Mexico’s prospects appear worse. Above, sunset lights up a chemical plant operating near Salvador, Brazil. (Jim Pickerell/REX/Shutterstock)

HOUSTON (ICIS)–The recessions in South America’s two largest economies should end in 2017, while the prospects for Mexico will dim, according to forecasts.

Brazil should finally return to growth after two consecutive years in which GDP shrank by more than 3%.

The rebound in 2017 will not be strong. Economists surveyed by Brazil’s central bank expect GDP to expand by less than 1%.

In fact, it is too early to tell if the recovery is sustainable, said Marcos De Marchi, the council president of the Brazilian Chemical Industry Association (Abiquim). He is also the CEO of Brazilian plasticizer producer Elekeiroz.

By the first quarter, market watchers should have a better idea about the strength of the recovery, he said.

Inflation is expected to finally fall under the central bank’s target of 2.5-6.5%, giving it room to lower interest rates. Lower rates should boost economic growth. 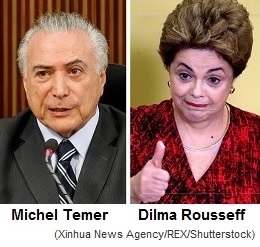 The impeachment of former president Dilma Rousseff in 2016 removed political uncertainty and gridlock from the Brazilian government. Her replacement, Michel Temer, has proposed spending caps and pension reforms that should get the country’s fiscal deficit under control.

However, threats loom if Brazil’s corruption scandal, Lava Jato, spreads and entangles more politicians. Other reforms may also have to await Brazil’s next president, who will replace Temer after his term ends in 2018.

Argentina, South America’s second largest economy, should recover from the shock treatment of the reforms by its new president, Mauricio Macri. Soon after he became president, Macri removed several of the nation’s foreign-exchange restrictions and import controls imposed by the previous Kirchner administration.

The result caused the Argentine peso to weaken, causing inflation to spike. This contributed to the country’s current recession. In all, the International Monetary Fund (IMF) expects Argentina’s economy to shrink by 1.8% this year.

However, the elimination of the restrictions also removed barriers that prevented companies from importing equipment and raw materials, removing a bottleneck to growth.

In addition, Macri reached a deal from creditors who were seeking more money from the country’s default at the start of the millennium. The impasse between Argentina and these hold-out creditors prevented the country from raising foreign debt.

Now that the two sides reached a deal, Argentina has started issuing foreign debt. This inflow of money should give the economy another boost.

The risk is that government spending gets out of hand, leaving Argentina with excessive debt.

Both Argentina and Brazil face risks from the next president of the US, Donald Trump. He has pledged to lower taxes and increase spending on infrastructure.

If Trump goes through with his programme, it will attract money from other parts of the world. Brazil, Argentina and other countries will have to compete with the US for capital.

Trump’s programme could also increase inflation in the US, which would prompt the nation’s central bank to raise interest rates.

Trump ran on a protectionist platform, and this could disrupt the substantial trade links between the US and Mexico.

Among his proposals was the renegotiation of the North American Free Trade Agreement (NAFTA), which includes Canada and Mexico. The US is Mexico’s largest trade partner, and barriers could hurt its economy.

At the minimum, Trump’s election will postpone investment decisions in Mexico because of the uncertainty regarding the trade policies of the new president, according to Swiss investment bank UBS. As such, it has lowered its 2017 forecast for GDP growth to 1.7% from an earlier estimate of 2.2%. Its forecast for 2016 is 2.2%.

Already, Mexico’s peso has weakened substantially against the US dollar. At the start of the year, it was near pesos (Ps)16.50. It is now more than Ps20 to the dollar.

The Mexican central bank could limit further weakening of the peso by raising interest rates. However, this could slow down economic growth.

The chart below shows the various forecasts for GDP growth for Brazil (yellow), Argentina (blue) and Mexico (green). 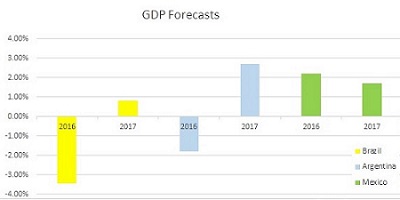