BUENOS AIRES, Argentina (ICIS)–Brazil’s ethanol sector could be poised for growth in 2017.

After years of growth earlier this decade, Brazil’s economy has been mired in the doldrums in recent years. However, growth could be on the horizon, possibly setting the stage for increased investment.

The International Monetary Fund (IMF) published its latest economic forecast for Brazil in November, saying it expects GDP to expand by 0.5% in 2017. Brazilian forecasters are a bit more optimistic, expecting growth of 1.13%.

The 2017 sector outlook for Latin American sugar and ethanol shifted to positive from negative, according a new Fitch Ratings report released in December.

“While forecasts point to positive fundamentals for sugar prices for the next two seasons, a more selective approach by banks and capital markets in Brazil is expected to concentrate funding toward well-managed companies,” said Claudio Miori, associate director at Fitch.

Tax incentives have played an important role in supporting ethanol consumption since the introduction of flex-fuel cars.

The table below shows the value of Tax on Industrialized Products (IPI), Contribution to the Social Integration Program/Contribution for Financing Social Security (PIS/COFINS) and state tax for circulation of goods and services (ICMS) for different categories of vehicles as reported by the National Association of Motor Vehicle Manufacturers (ANFAVEA).

Not only improved economic conditions are expected, but also an increase in biofuels use.

In early 2015, the Brazilian government granted an expected increase in the national blend of ethanol in gasoline to 27% up from the previous 25%.

Additionally, according to the International Energy Agency (IEA) in its latest World Energy Outlook 2016 report biofuel use could nearly triple by 2040.

Under one projection called the New Policies Scenario, there could be a “near tripling” in consumption of biofuels to 4.2m bbl of oil equivalent per day (mboe/d) in 2040, with 65% of this being ethanol.

This would represent some 6% of transport fuel demand, and would come about thanks to support from subsidies and advances in technology, said the IEA.

“We are desperate for new investment in the sector. We just need the right conditions,” she said in November during the World Ethanol & Biofuels conference in Brussels in November 2016. 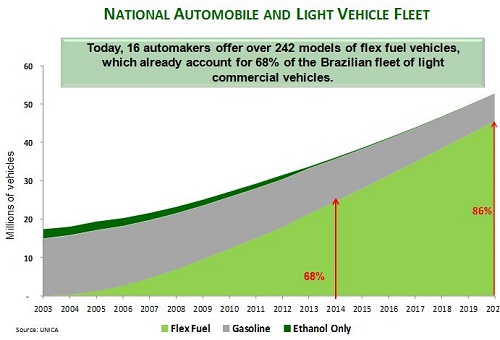